After weeks of national controversy led by Donald Trump over supposed vote rigging and voter fraud, an actual case of voter fraud occurred in Iowa. It was committed by a Trump supporter.

Terri Rote was one of three people in Polk County reported to the police by the Polk County Auditor’s office for voting twice in the November election. Rote was the only one arrested so far, and told Iowa Public Radio that she decided in “the spur of the moment” to vote a second time at a satellite voting location because she feared her original ballot would be switched to Hillary Clinton because of vote rigging. Simpson College professor Kedron Bardwell then noticed an old tweet from the Iowa Caucus where Rote was waving a Trump sign.

And the first Iowa voter fraud case in 2016 is…

A quick glance at Rote’s Facebook page shows she frequently posts rather racist commentary and links to racist videos and articles. One of her photos appears to show a Confederate flag flying on her house. The majority of her non-game related posts show an obsession with black people and what damage she believes they’re doing to the country. 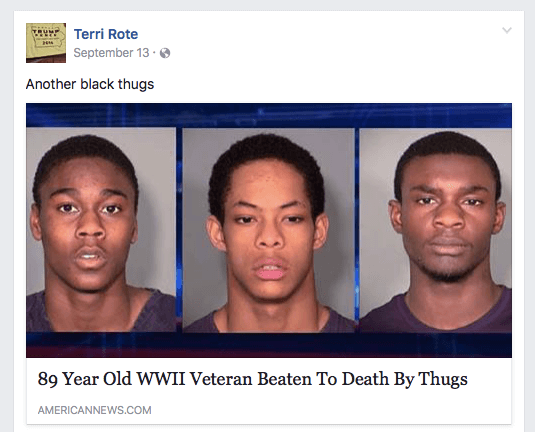 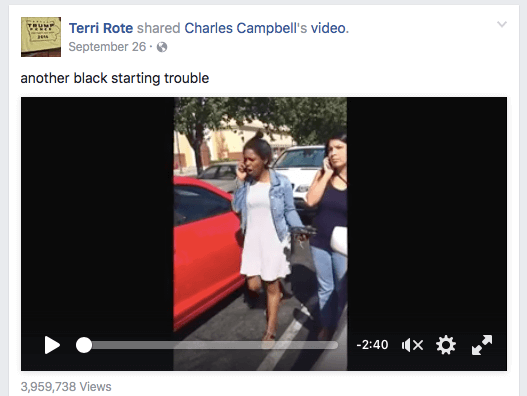 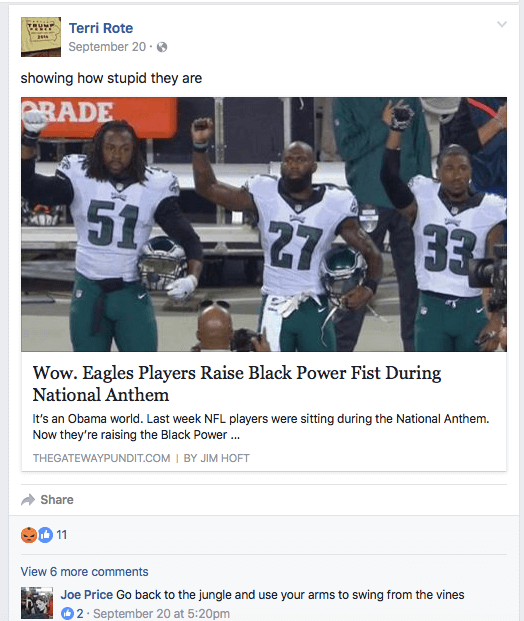 Most of her posts originate from racist or right-wing sites that promote conspiracy theories. And while much of her Facebook comments are derogatory to black people, she also seems to enjoy any video where a black person is defending or endorsing Trump. She also posts often about her support of Trump, as well as how much she despises Hillary Clinton.

Rote rather proudly accepts the “deplorables” label that Clinton named many Trump supporters as. 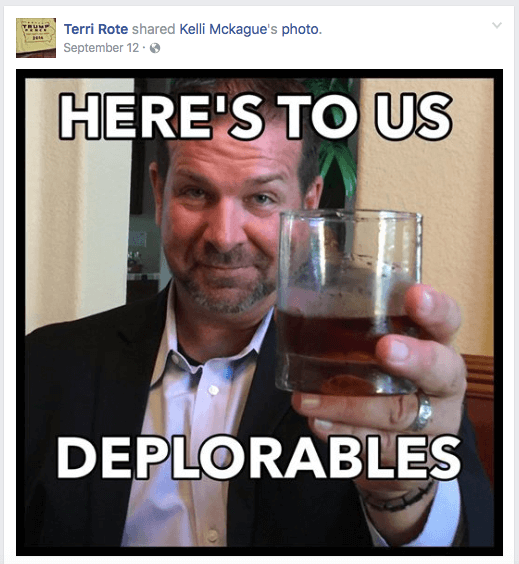 [Update: A reader also sends along this Iowa Workforce Development unemployment insurance appeal that shows Rote was fired from a Des Moines McDonald’s for calling a fellow employee a “n**ger,” arguing with customers and refusing to do simple tasks.]

Rote’s decision to commit voter fraud and her social media postings bring up a number of interesting angles to this story. First, obviously, is the irony that Republican-induced fear about voter fraud would cause a Republican to actually carry out voter fraud herself.

Second, the entire ordeal shows how difficult voter fraud is to carry out. Those who did were quickly identified and stopped. The process works, and the Polk County Auditor pointed out that there are systems in place to catch it in the very few instances it occurs.

Third, Rote’s social media postings seem to point to another reason why attempted voter fraud is so rare: no sane, normal person would try it. You risk prison and a huge fine, and for what? An extra vote or two for your candidate? In a statewide race where the winner will probably prevail by tens of thousands of votes? But if you read through most of Rote’s postings, it seems she might have some personal issues aside from the racism. If a more rational-sounding person had tried to vote twice, it would be a little more worrisome.

Rote appears to… not have it all together, and may have gotten needlessly whipped up in the extremes of this election, and now faces a felony charge. It will be easy for some to quickly hate this woman (and many are already attacking her on Facebook page), but it seems like she needs some help more than anything else.

This also serves as a perfect example of why leaders like Trump or Governor Terry Branstad shouldn’t engage in speculation about the election being influenced by voter fraud, or that the media is rigging the election. Many criticized Branstad for not giving a more strident defense of election integrity and for pivoting so quick to how the media could rig everything. Branstad probably thought he was just spinning the news to his party’s favor, but that most people wouldn’t actually believe the entire electoral system was rigged. The problem is that some people who hear your message may not have the ability to process it rationally.

However, Democrats should be careful about crowing too loudly about a Republican committing voter fraud. The two other people accused of voting twice haven’t been announced yet – it’s possible it’ll be two Democrats. And anyone who is honest knows that neither party engages in intentional voter fraud, so any of these cases don’t represent the party at large (the bigger problem, of course, is voter suppression).

The main lesson here is how extreme rhetoric has real-life consequences. Terri Rote may be going to jail and probably will have real difficulties getting a job after all of this, considering her name and mugshot are plastered in news articles across the country. Yes, she seems to be a rather unrepentant racist, but people don’t learn this on their own, nor do they take such incredibly stupid illegal actions without being influenced by something. Political leaders should keep that in mind as they choose how they speak and conduct themselves in political discourse.