As Joe Biden takes campaign hits from both President Donald Trump and his competitors in the primary, firefighter union members will have the former vice president’s back in the final weeks before the Iowa Caucus.

During an interview with Starting Line this morning, International Association of Fire Fighters President Harold Schaitberger said he will be in Iowa each week until the caucuses talking to, and organizing, his members who “are in every town that has a blinking light.”

During the stops, Schaitberger reminds them they have a disproportionately large voice in deciding who is going to lead the country.

“I discuss with them their responsibility and get their commitment to participate in the caucuses,” Schaitberger said. “We obviously discuss the details of how the caucus system works for those who haven’t caucused before, and we spend a lot of time on why we endorsed Joe Biden as our candidate very early on, and his 40-year track record of supporting the issues critically important to firefighters, their profession, our union and working families in general.”

There won’t be IAFF members at every one of Iowa’s 1,600 precinct locations on Feb. 3, but Schaitberger promises they will be at hundreds of locations. And they’ll all be standing for Biden.

The plan, Schaitberger said, is to “teepee” a corner of as many precinct locations as they can with the firefighter’s black and gold signage, which could stand out more than ever this year.

“I’ve been doing this a long time and this is the first caucus that I can recall where the great unions in our country — my brothers and sisters — have not yet made a decision on a candidate,” Schaitberger said. “Normally you would have AFSCME, the green monster, out there.” 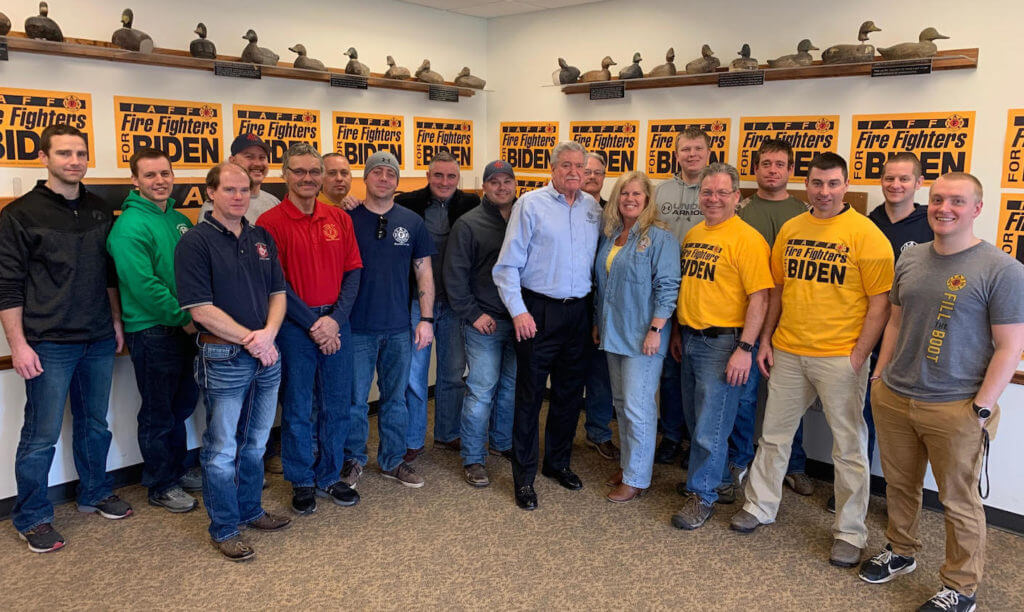 While Schaitberger doesn’t like to use the word “compete” when talking about his fellow unions, he said the IAFF generally has to find a way to stand out from the SEIU (Service Employees International Union), known as the purple warriors, and the UAW (United Auto Workers) and other large groups who generally plaster precincts with signs on caucus night.

“In this cycle, that’s not the case,” he said. “It gives us, I think, a little bit of an advantage.”

Firefighters aren’t the only advantage Biden has in Iowa. He has a large team of surrogates stumping for him, and they’re all Schaitberger’s good friends.

“She is an unbelievable talent, that woman,” Schaitberger said, of Finkenauer. “Her voice is going to resonate within the labor movement considerably.

“I think when she announced her endorsement, that was very powerful,” he continued. “I think that’ll have a very significant impact on who gets what ticket coming out of Iowa.”

Former Iowa Gov. Tom Vilsack and his wife, Christie Vilsack, also have hit the trail with Biden in Iowa.

“I’ve known them a long time,” Schaitberger said. “They still have a strong reputation and standing within the state, and so I like where we are.”

He’s also glad John Kerry, a former secretary of state who the firefighters endorsed for president in 2004, is on the road in Iowa with Biden.

“In 2004, they had John dead in the water,” Schaitberger recalled. “In fact, the headlines in the Boston Globe was ‘Kerry Dead In The Water.'”

“And yet, when you understand the caucus operation and you understand how to utilize the rules … you recognize there’s a big difference in trying to identify people who express support and might even be willing, in a primary, to go by and drop a ballot in the box or to send their ballot in, as opposed to those who have the commitment to show up at 7:00 on that Monday night on a very cold winter of Iowa and spend a few hours in this caucus system,” he said.

“And that’s where we were able to have John have that movement, gain that momentum, and all of the sudden … when the smoke cleared, John Kerry got the rocket ship out of Iowa and New Hampshire. And I feel that same momentum with Joe.”