The Democratic presidential candidates often like to rail against Facebook and conservative, corporate-owned news outlets. Their campaign spending, however, rarely matches their words on the campaign trail.

Candidates have dumped millions upon millions of dollars onto Facebook’s advertising platform this year, even as the Democratic field denounces the company’s handling of misinformation and foreign interference in American elections. The Boston Globe this morning reported that Democratic presidential candidates have spent a combined $29 million on Facebook ads so far this year. Much of that has gone to acquiring small dollar donors — often at a cost far, far higher than the money they raise — in order to qualify for the DNC’s debate rules.

Meanwhile, while candidates tout the importance of local journalism, several of their campaigns spend tens of thousands of dollars weekly on Sinclair-owned TV stations in Iowa and elsewhere across the country.

Starting Line will be keeping track of these purchases for public consumption over the next several weeks, pulling out examples we find interesting.

Here is how much money Democratic presidential candidates spent on TV ads placed on Sinclair-owned stations last week (not every candidate runs their ad flights in the exact same dates — we list those dates at top). Pete Buttigieg started running ads this week, but not last.

For Facebook ads, we’re taking a look through the Facebook political ad archive library. When selecting the last seven days, it gives us September 3rd to 9th, which isn’t perfectly “last week,” but it’s close enough. This is for the entire country, not just Iowa. Here’s what everyone is spending in just one week: 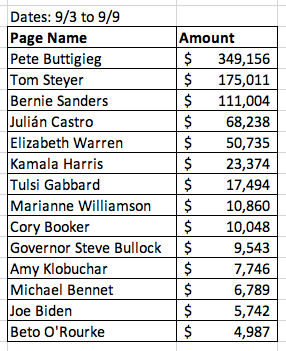