The battle for control of the Iowa Statehouse is getting even more interesting as we’re about to reach the finish line. The last finance report put out Friday shows new races coming onto the board late for Democrats, while Republicans have fully pulled out of some districts.

Democrats’ financial advantage has become even more clear in Iowa House races, where the party’s candidates are outspending their Republican opponents in all but two of the contested districts. The strain for the GOP on the expanded map appears to have caused them to abandon incumbent Jeff Shipley in the Fairfield district and give up on their challenge to Mary Gaskill in Ottumwa. Meanwhile, Republicans are allowing Democrats’ sudden heavy investment in Charles Clayton to go unchallenged, leaving first-termer Ann Meyer to hope Fort Dodge’s new GOP lean is enough to survive.

Starting Line covered the campaign spending reports from mid-October that showed the general battleground map for both parties. We’ll focus on just the in-kind spending in this piece — those numbers largely cover the money the state party is spending on behalf of a legislative candidate (the funds are usually a mix of what the candidate raises and what the party has independently). The in-kind money is usually made of TV, radio, mail and digital ads. For the highest-spending districts, most of the in-kind totals at this point are TV ads.

Here’s a look at those in-kind numbers in House districts where one or both sides is still spending a decent amount. The latest report covers most of the second half of October.

Let’s get a few simple things out of the way first.

The party may win all of these seats by good margins on Nov. 3, but after surprise Democratic losses in several of the past cycles, House Democrats are taking no chances, a strategy made easier with their fundraising advantage.

For as much as Iowa Republicans like to hype Eddie Andrews’ chances of knocking off first-term incumbent Karin Derry in Johnston’s HD 39, they still have not put in any money for him. Democrats have spent heavily here to ensure Derry returns.

Of the six suburban seats that Democrats flipped in 2018, they’re only spending substantially for Derry (who won by about 300 votes) and a moderate amount for Judge. That’s a big reason why Democrats have been able to expand the map so much this cycle.

It appears that Republicans have given up on the Ottumwa and Fairfield seats. Doing so in incumbent Shipley’s HD 82 means they’re letting two Republican seats go without a fight at the end, making their path to holding the majority that much harder.

Democrats in Jefferson County (home to Fairfield) have already surpassed their total 2016 turnout, which may be putting this out of reach for Republicans. Shipley’s unique personality pulls from some of the Fairfield Democratic base, but he’s endured brutal negative ads on the ridiculous and offensive things he said this year.

The retreat down here is interesting, given Trump may do well again in blue-collar Southeast Iowa — he won every Ottumwa precinct except one in 2016. But longtime Democratic incumbent Gaskill of HD 81 seems to be surviving those trends, with the GOP giving up on Cherielynn Westrich.

If you’re looking for a Democratic surprise on election night, keep an eye on Fort Dodge’s HD 9. Yes, this formerly blue town in Western Iowa may well continue its rightward march and first-term GOP Rep. Ann Meyer could hold on. But she’s not really spending anything while her Democratic challenger Charles Clayton has serious ad dollars behind him. Meyer only won this seat by four points in 2018, and Clayton is an extremely well-known and well-liked community leader.

Statehouse surprises typically happen when someone sneaks up right at the end before the other side can react, and that seems to be where Clayton is positioned right now. He went up on TV several weeks after most of the targeted Democratic candidates did, and the GOP has not responded.

After Meyer provided Republicans one of their only two pick-up wins in 2018, her party has now left her reelection up to hope and fate.

Now let’s get into the swing seats where both parties are engaging heavily.

Here’s the in-kind list sorted by the districts seeing the largest combined spending in the final two weeks, taking out a few with lower totals. While most of the top-spending battlegrounds remain the same, there’s three where Democrats have ramped up at the end.

Democrats are charging hard at Bobby Kaufmann, the son of the Republican Party of Iowa chair, seemingly confident in Lonny Pulkrabek’s appeal to rural Cedar and Johnson county voters with his sheriff background. Either the two parties’ internal polling is showing them wildly different things, or this is a situation where Democrats are pressing their financial advantage to force an upset loss against an entrenched incumbent. The massive spending disparity here is striking, with Democrats outspending Republicans by more than a 4-to-1 margin. A Kaufmann losing on election night would be a seismic event in Iowa politics.

In Scott County, Democrats have opened up a new front with a big investment in Jennifer Kakert in HD 92. While they had started to put her on TV during the last report, Kakert was 17th in in-kinds from the party. Now she has a quarter million dollars behind her for the final stretch to knock off incumbent Ross Paustian in this formerly swing district that’s trended Republican under Trump.

As a side note, the fact that this seat, which includes about equal parts rural, small town (Eldridge) and urban Davenport — making it a perfect bellweather district — is competitive locally is great news for Democrats’ chances statewide.

Democrats are also spending big to hold onto the rural HD 64 in Northeast Iowa, which was once seen as a very promising pick-up opportunity for Republicans with Bruce Bearinger retiring. They’d already been backing Jodi Grover, who has a large volunteer network in her campaign, but after she was 11th on the party’s in-kind list last report, she’s third now. Republicans have a good deal of money behind Chad Ingels (the district is the third-highest combined spending in the final stretch), but here’s another place where Democrats’ fundraising advantage is paying dividends.

If the northeast corner of the state moves back Democrats’ way after swinging heavily to Trump in 2016, Grover could well prevail in a seat some once thought was lost.

Iowa activists’ (and reporters’) understanding of the legislative battlegrounds are often too heavily skewed by the state’s Des Moines-centric echo chamber. But the most expensive race this cycle is not the Andrea Phillips/John Landon matchup in Ankeny. It’s the Bettendorf battle royale between incumbent Gary Mohr and Democrat Marie Gleason. House GOP Speaker Pat Grassley was out knocking doors for Mohr this past week, underscoring its importance in control of the chamber.

I’m in Bettendorf today door knocking for Rep. Gary Mohr! Iowa is ready to #VOTE for Republicans up and down the ballot on #ElectionDay. pic.twitter.com/CZWF6XyLlT

The Ankeny seat remains another of the state’s most expensive — just because the other Des Moines suburban seats have flipped doesn’t guarantee this one will, and Phillips’ close race could well determine control of the Iowa House. Landon will need Republicans to really turn out here on Election Day — 67% of registered Democrats here have already voted, compared to just 36% of registered Republicans.

There’s not too many new things to say about Decorah’s HD 55 that hasn’t already been discussed, except that Kayla Koether’s chances are certainly helped by Winneshiek County already seeing 110 more registered Democrats already voting now than did in total in 2016.

Rounding out the Democratic offensive districts is Council Bluffs’ HD 16, where Jen Pellant has more funding at the end than former Speaker Brent Siegrist. Muscatine’s HD 91 is one of the few areas where Republicans are oustpending the Democrats in a contested race — it seems like Democrats may be wanting to keep Kelcey Brackett competitive in case the Mississippi River counties bounce back for the party.

Notably, Democrats have not pulled out of any offensive districts they seriously started to contest this cycle.

To make Democrats’ task of retaking the majority much harder this year, Republicans targeted Democratic seats that Trump had carried by decent margins in 2016. Their offense options have narrowed, but they still have some.

Both Democrats and Republicans continue to spend substantially in Warren County’s HD 26, where Brooke Boden is running very misleading attacks on incumbent Scott Ourth, trying to cast him as anti-police in this culturally conservative district (anyone familiar with Ourth knows that isn’t true). The two parties must see polling that shows this race still close given how much both are putting in.

Perhaps the parties are seeing different things in Jackson and Jones counties’ HD 58, where Republican-turned-Democrat Andy McKean is trying to hold a Trump +20 district. McKean, a locally beloved figure, was Democrats’ third-highest in-kind spend candidate in the previous report. He’s their 13th now. Meanwhile, Republicans are actually outspending Democrats here by putting more money behind Steven Bradley. This district will need to stay very Trump-y for Republicans to defeat McKean.

The race in House Democratic Leader Todd Prichard’s HD 52 has cooled off significantly after Democrats invested a half million to hold the Charles City-based seat that Trump carried by a large margin four years ago. Republicans still have some money going in for Craig Clark, so they haven’t written the major upset off just yet.

Overall, it seems Republicans’ flip potentials are down to three serious ones now, while they’re still keeping some pressure on Prichard.

One other random thing: there are several Democratic candidates in non-targeted Republican Iowa House districts that saw impressive fundraising totals in 2020, but who were still reporting several tens of thousands of dollars of cash on hand four days out from the election. Hopefully they find ways to spend that…

The Senate map is a much simpler situation. Democrats are on serious offense in four districts. They’re defending one. There’s little spending elsewhere. 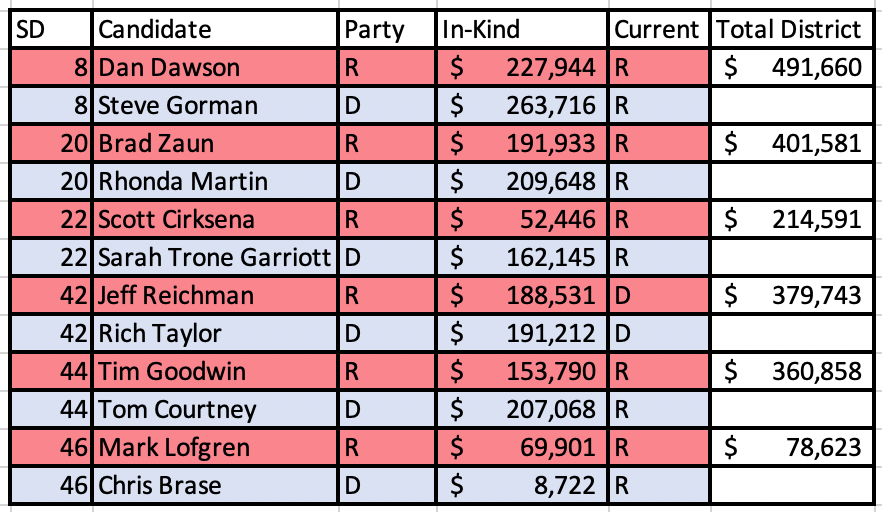 We didn’t do an entire write-up on earlier spending in the Senate races, where Republicans’ financial advantage was much more apparent early on. Although these races have seen much more Republican spending overall, Democrats are at least keeping pace in most of the targeted districts for the final two weeks.

Democrats’ best pick-up opportunities likely lie in the Des Moines suburbs, where they hope to recreate the flips at the House level in the city’s western suburbs. Their best shot is capturing the open SD 22 with Sarah Trone Garriott, and Republicans pulling back on Scott Cirksena seems to indicate they already see this was as gone for them. Rhonda Martin may yet knock off the resilient Brad Zaun. Democrats now hold all four House seats underneath these two Senate districts.

The Council Bluffs race is seeing a lot of spending on both sides, pointing to Steve Gorman having a decent shot at ousting first-term senator Dan Dawson. The Western Iowa city appears to be bouncing back in Democrats’ favor after working-class white voters there favored Trump heavily in 2016.

Southeast Iowa is the other big battleground. Rich Taylor is trying to hold onto the Lee County/Mt. Pleasant seat, the only one where Republicans think they have a shot of flipping one this year. Taylor’s fate may be closely tied with Tom Courtney, attempting a comeback in a district with similar demographics — Democratic blue-collar base towns with perhaps a bit too many rural precincts during the Trump era. If Democrats regain many of their lost blue-collar and union voters, they’ll carry both of these seats.

Republicans’ financial advantage shows in what isn’t being contested, like the Muscatine/Scott County-based SD 46, where firefighter Chris Brase hoped to return to the Senate after being defeated in 2016. Republicans have just-to-be-safe money for Mark Lofgren, but Democrats weren’t able to extend their spending here.