Iowa House District 92 candidate Jennifer Kakert has successfully tried her hand working at a multinational corporation, doing property development in the Quad Cities and owning a downtown Davenport small business while being on the board of several non-profits and raising a family.

Kakert is challenging Rep. Ross Paustian for his spot in the Legislature. She’s using her background as a jack-of-all-trades to appeal to in a swing district where voters have shown an independent streak and who haven’t elected a Democrat to the seat since 2012.

Kakert said she feels confident ahead of November’s election. Encompassing Eldridge, some of Davenport and about half of rural Scott County, District 92 has been inching toward the left in recent years, and Democrats now have a slight edge in voter registration. 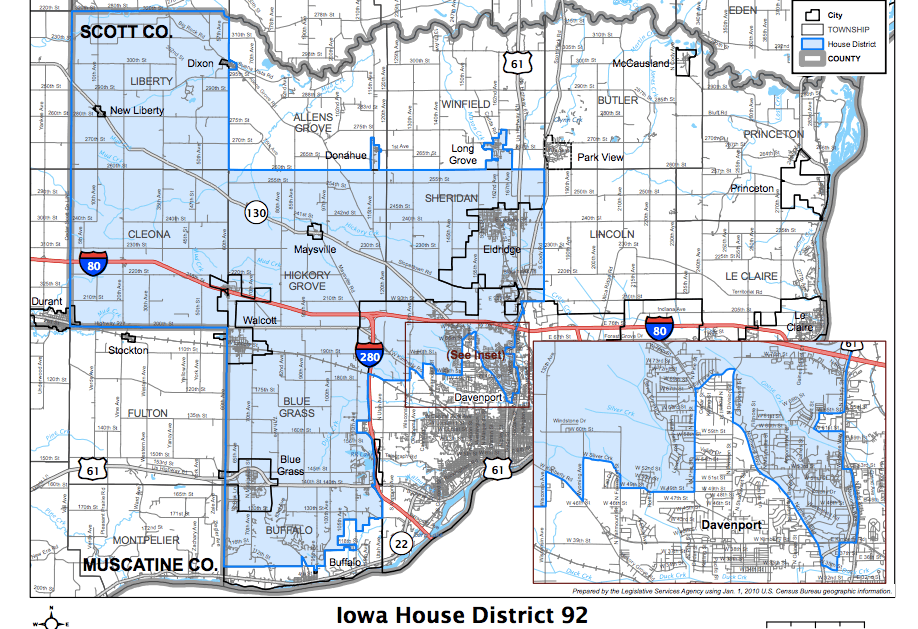 The candidate has also been able to raise significantly more than her opponent. Kakert brought in $23,276 for the July fundraising report, compared to Paustian’s $3,385. Kakert’s fundraising haul was one of the surprises in the most recent finance period, the seventh-highest among Democratic House candidates.

“I’ve actually raised more money than anybody who’s ever run [for this district] at this point in the campaign,” Kakert said. “I think right now we are starting to see this shift. We started seeing it in 2018. I think we’ll continue to see it … I think [voters] really want common-sense solutions. I think they want people working together. I think they want they want a strong economy. They want good jobs. They want to have a great place to live.”

Although she grew up mainly in St. Louis, Missouri, Kakert said she considers herself an Iowan. Her mother’s family has deep roots in the Iowa City area, where the candidate got her undergraduate degree in accounting and met her husband at the University of Iowa.

After college, Kakert began her career in public accounting in St. Louis, spent ten years in her company’s San Francisco office (where she also earned an MBA at Berkeley) and was transferred to England for a time before coming back to Iowa.

“I’ve lived the majority of my life here in the state of Iowa, and it’s been the strongest influence on my life. I have roots here and my husband is fifth or sixth generation. If you ignore the fact that I wasn’t born here … my kids will be the sixth generation on both sides to live in Iowa,” she said.

After Kakert and her Quad-cities native husband got married, the couple settled in Blue Grass because of their school system and the “great environment for a family structure” for their children Jack, 16 and Caitlin, 12.

Always having her sights set on becoming a small-business owner, the mom-of-two said she was unable to achieve her dream while Jack and Caitlin grew up because of ongoing health care costs while raising a family. So she took a job with a larger employer—the candidate is now the Chief Financial Officer for Financial District Properties, a property development company in Davenport.

“I had insurance through my job. My husband was self-employed,” she said. “As a result, I decided, okay, well, I guess I’ll put that dream on hold and I’ll just keep working for a larger employer, mainly because employers provided health care.”

Making small business opportunities more attainable has since been one of Kakert’s priorities. Since 2016 the candidate has co-owned a day spa in Davenport’s Union Arcade building—one of the properties Financial District Properties works with.

She said she offers medical coverage for her employees who work more than 30 hours a week and pay above industry averages.

“We wanted it to be a great place to work,” Kakert said. “I feel like the wages we’re paying are well above what the industry pays and I really like seeing that. In a way, [the employees are] creating that by building their own clientele. They’re being given a great place to work and see their clients. And it’s kind of a win-win for everybody.”

While working on those boards, Kakert said she was introduced to two women who ultimately encouraged her to run for office and get involved in politics.

The candidate said she worked closely with Davenport Rep. Cindy Winckler while working with Scott County Kids, and through boards, Kakert also became close with and Maggie Tinsman, a longtime Republican state senator who encouraged her bid.

“[Tinsman] was part of that 50/50 by 20/20 bipartisan initiative to get women to get involved in government,” Kakert said. “I really feel that it’s where I’m headed. This is what I want to do.”

Her lean toward the statehouse may be within reach—Iowa’s Democratic Party has been aiding the candidate in her fight for the seat, one of several promising races which could help take four House slots and gain a Democratic majority.

In 2012 the Scott County district voted for Barack Obama over Mitt Romney by nearly nine points. Donald Trump in 2016 won over Hillary Clinton by about six points there. Current Republican Gov. Kim Reynolds beat Democrat Fred Hubbell in 2018 by about seven points in HD 92, but the same year, Auditor Rob Sand, a Democrat, beat his Republican opponent Mary Mosiman by five points.

“There’s definitely shared resources for turning out the Democratic vote this year,” Kakert said. “The Democratic Party is focused on energizing the Democratic base and turning them out for voting. Top to bottom. And we’re really focused on persuading the independents and getting people out to vote that maybe wouldn’t traditionally vote Democratic.”

Kakert is using this momentum from the party and virtual campaign strategies to push her agenda for more education and healthcare investments along with strengthening the middle class.

“I think you have to invest in good-paying jobs, get to invest in education and to invest in health care. And if you do those things, society will be better off and people will be happier,” she said. “And having a stronger middle class is the most important thing.”