It was a Friday afternoon in Maquoketa, and state Rep. Andy McKean was huddled around a piano with a longtime local radio broadcaster in the town’s historic Decker House Hotel for some “good old fashioned campaigning.”

Good old fashioned campaigning looks the same as it did decades ago, said the man who was Iowa’s longest-serving Republican legislator as he sang country music into radio equipment that 81-year-old Dennis Voy brought from Maquoketa’s KMAQ radio station across the street.

This particular Friday, 18 days out from the election, McKean’s radio show guest was the “most popular man in Maquoketa.” Glen Henton, also known as Red, had turned 100 last month with little left to accomplish. Donning a hat gifted to him by Hollywood director Steven Spielberg (he fought in World War II with “Steve’s” father), Red signed with the Chicago White Sox, is in the Guinness Book of World Records for horseshoe pitching and has traveled the world as a renowned Country artist. 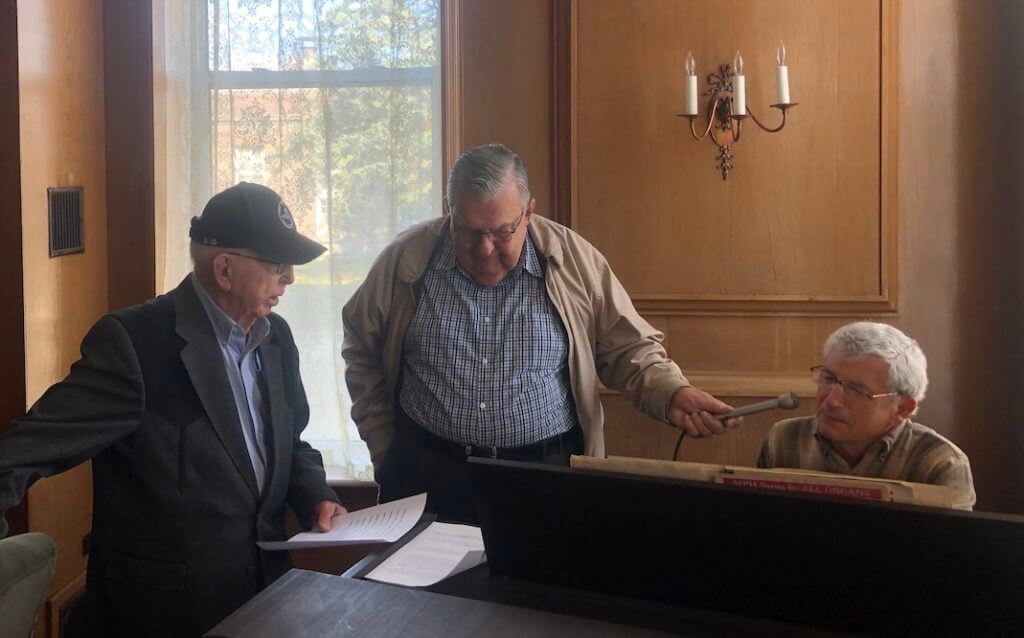 He endorsed McKean clearly into the radio before the candidate boasted about his friend of over 40 years’ popularity—Red received over 400 birthday cards last month, including one from Donald Trump. But of course, the President’s well-wishes didn’t mean as much as those from the tight-knit community, the story goes.

McKean, Red and Voy gleefully wrapped up their show before heading to the restaurant of the Decker Hotel—a town fixture “older than Red” for lunch. Several townspeople stopped to banter with the men before they were able to settle into a table, a glass of iced tea waiting for McKean.

Though this day on the trail seemed typical for the longtime legislator, for many reasons the rest of his campaign was unusual. It was McKean’s first time running during a global pandemic—which has dampened his personal, folksy political style in the rural Jones and Jackson County district—but it was also his first time running as a Democrat.

“It’s been a very different campaign, and I regret the fact that it’s so impersonal, but the divisiveness is very troubling,” McKean said in an interview with Iowa Starting Line. “I’ve never encountered it before—there’s always been some partisanship, but nothing like this.”

Remaining moderate and fiercely independent during the entirety of his 29 years in the Iowa legislature with stints in both the House and the Senate, McKean announced his party switch in April 2019 when he called Trump “a poor example for the nation and particularly for our children” and said he’d seek re-election in 2020 as a Democrat. He had just returned to the Statehouse in 2019 after leaving it in 2003. He had served there since 1979.

McKean’s switch—which made national news last year—was not the typical party defection. Usually, an incumbent in a changing district will go over to the party that holds the advantage there to improve their reelection hopes. McKean’s move to the Democrats was the opposite—his rural district backed Trump over Hillary Clinton by 20 points in 2016.

But the Representative said he’s confident that his constituents know him for what he’s done for the county and if re-elected, he’d serve the community the way he always has.

“Andy’s probably the only Democrat who could win in the district,” said McKean’s campaign manager Lizz Tyler.

Though the current president was the tipping point for McKean’s conversion, he doesn’t like to “Trump bash.” When asked why he made the rare party change, the Representative usually highlights the fact that Iowa Republicans were gradually passing more legislation that he thought wasn’t in the best interest of Jackson and Jones counties.

“They were gutting collective bargaining, they were politicizing our courts, underfunding education, underfunding natural resource protection. And I was just getting tired of it,” McKean said to one constituent while out dropping off campaign literature.

“And then I think I would have limped along and tried my best to be a moderating force in the party, but Trump was the final straw. I could not go through an election with him as my party head. I just couldn’t do it.” 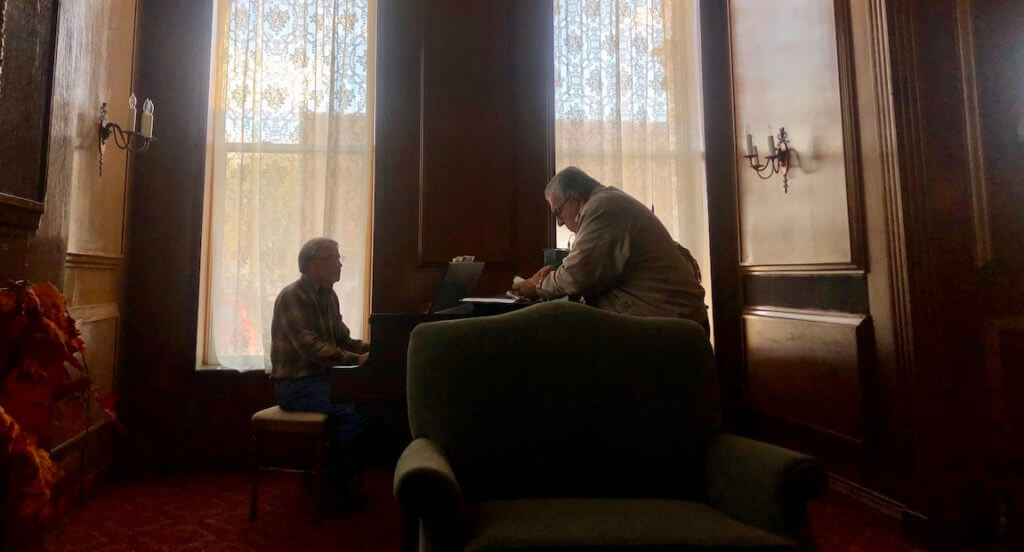 A retired attorney, McKean was raised in New York before coming to Iowa one summer to reconnect with his roots and work on a farm in Anamosa, the town where his grandfather, John McKean, was a judge and represented Jones County in the Iowa Senate. He ended up attending the University of Iowa for law school, where he met his wife Connie and settled in the town. Connie, a northwest Iowa native, clerks for McKean at the statehouse.

John McKean was another of the few Iowa lawmakers to switch parties, his grandson likes to mention, except he changed over to the Republican Party in the 1860s in order to align with President Abraham Lincoln and his ideas on emancipation.

McKean is beloved and deeply personal with those in his district—he said that COVID, which has hit the rural counties hard, has been very challenging for his constituents. He’s been getting some access to helpful government programs or cutting through bureaucratic red tape. But some, who McKean calls his “regulars,” just call the Representative in their loneliness.

“I think people know here in the area that I’ve always put the needs of my district over party politics and will continue to do so. Whether Republican or Democrat,” McKean said in his car after lunch, periodically turning up the radio dial to tune into KMAQ to hear the political advertisements.

McKean snickered after one, where U.S. Senator Chuck Grassley urged constituents to vote for his opponent, Republican Steve Bradley. The Cascade, Iowa dentist is a first-time candidate who has branded himself pro-life, pro-gun and pro-Trump. As a medical professional, Bradley has been door-knocking the district often without a mask and has received a comfortable backing from the state GOP.

Some of that money has gone to funding flyers saying that McKean has “changed” and that constituents can’t trust him anymore, an attack that deeply saddens the long-serving candidate.

“It bothers me, but I’ve had to develop thick skin. It bothers my wife. In the legislature, you’re accustomed to it, but people who are friends who suddenly have very different views of me amazes me, because the thing that’s so strange is the issues I’ve worked for over the years and my beliefs are exactly what they always have been,” he said. 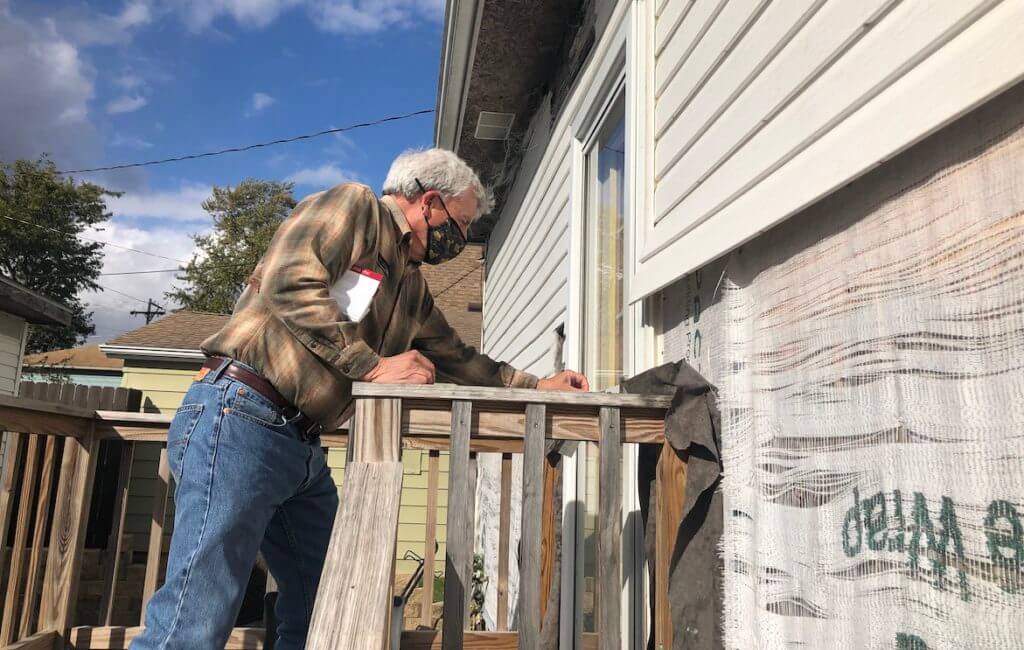 The issues in District 58 are similar to most others in rural Iowa. Quality education, rural revitalization and economic development, increased telemedicine, equalized transportation costs and mental health support. He said he’s been “delighted to be able to give some support” to local entities like the radio stations and newspapers with ad money from his campaign.

But what’s been difficult for McKean is that because of his tight COVID-19 mitigation practices, he hasn’t been able to be at the doors to personally explain his party switch to interested constituents.

But that hasn’t stopped some from asking.

“Hey! You were a Republican and switched to Democrat,” shouted one woman, her car screeching to a halt in order to address McKean, who was passing out campaign literature at the houses in Miles, a small city with a population of just over 400.

McKean paused and answered her by saying that his alignment with the Democratic Party had to do with Iowa Republican’s continual disinvestment in education and cutting collective bargaining, among other things. But the woman wasn’t satisfied.

“What about abortion? Our main thing is biblical views. And [Democrats] aren’t following the biblical views. They believe in abortion and they believe that a baby can be born—not you, but for sure Joe Biden, for sure Nancy Pelosi and for sure the New York Governor and other governors within the United States. And you know as well as I do, if you know your bible, that that is completely against God’s rules and that’s murder. It’s in the ten commandments and it’s flat out murder.”

McKean replied by saying, “I guess I would just have to respond with, I don’t think most Democrats favor abortion. The bible also says that we have to take care of the least among us.” He also described his past record of pro-life voting, except for the “heartbeat bill,” which he deemed unconstitutional.

“I’ve always been independent, I always will be. I vote for what I think is best for my district.” 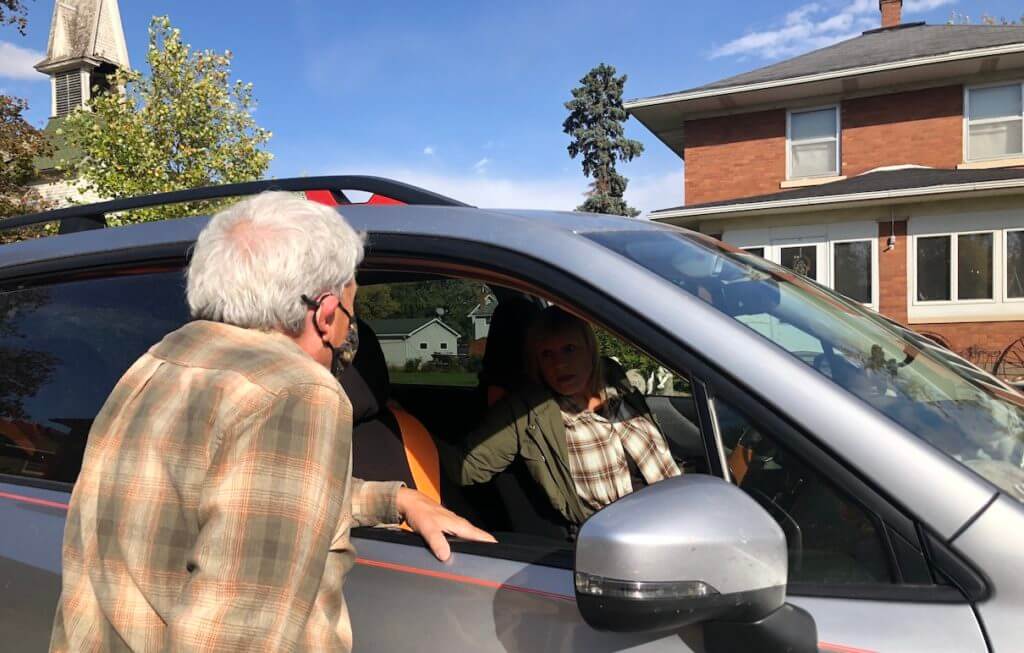 The interaction, emblematic of the sort of partisan hostility McKean is attempting to curb, ended calmly, and the woman left saying it was “nice to hear different viewpoints.”

“We were just disappointed and couldn’t figure out what happened. We were just kind of surprised to see that you [changed parties]. So I see you out walking and thought, I’m just going to stop and ask. If I don’t ask, we’re never going to know,” she said, before driving away.

After completing his socially distant campaign literature drops, McKean’s day of “good old fashioned campaigning” ended with a drive back home to his Anamosa home. While driving, some of the rural yards displayed Trump signs, but also McKean ones. He turned on KMAQ again, his friend Dennis still on-air, announcing the obituaries.

McKean has won 16 elections, including his race for high school class president. He’s never lost—but said he’s prepared himself for that possibility this time around.

“I guess I’d be a little surprised. I’d like to think that I’ve established enough goodwill over the years to survive this campaign. But it’s been a strange, unpredictable year. But my wife and I are in a point in life where we’d be glad to go back to Des Moines and do our best, but there would be a lot of things we would look forward to doing if I wasn’t there … We’re at a point in life where we have time and flexibility and beautiful grandchildren, so I think we’d survive.”

2 Comments on "A Decent Man In Indecent Times: Andy McKean Tries To Hold On In Trump District"