Democratic candidates are dramatically out-raising and in many districts out-spending their Republican opponents in the battle for control of the Iowa House. It’s a change from past cycles, and may well put Democrats on the path to flipping the net of four seats needed to end full Republican control of the Statehouse.

Earlier this week, state campaigns released their latest finance reports that cover the mid-July to mid-October timeframe, which is when the largest chunk of campaign spending happens. Let’s go through many of the key takeaways from the data.

You can view our full spreadsheet here.

Overall, here’s the total raised by all Iowa House candidates:

The other big number to look at in these reports is the “in-kind” spending on behalf of candidates. This is the number that tells you where each party believes their top targets are and are spending accordingly. These typically include TV and radio ads, direct mail, digital ads, and more. The in-kind expenses are mostly from the state party committee for House races, but the money itself is usually a mix both from the candidate and from the party committee.

Here’s the totals on in-kind spending:

As is usually the case, leadership from both parties topped the list of total donations. For Republicans, Speaker Pat Grassley raised an impressive $845,000, while Majority Leader Matt Windschitl brought in $391,000. It drops off significantly after that, however. GOP leadership overall accounts for about half of their total fundraising. 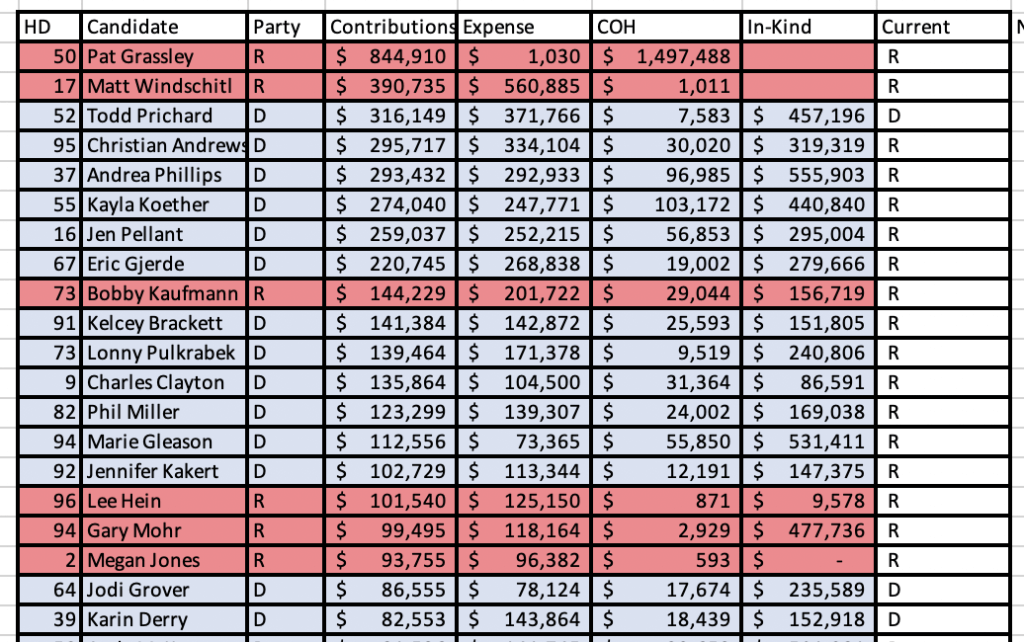 For Democrats, it’s the challenger candidates themselves that are bringing in the bulk of the money. While Democratic Leader Todd Prichard leads his caucus with $316,000, the non-incumbent candidates are posting eye-popping fundraising totals. Small dollar donations are fueling massive fundraising totals for first and second-time candidates, those who don’t have near the number of connections as incumbent legislators.

Christian Andrews, making his second run for the now-open HD 95, which is mostly rural Linn County, has a contribution report is 402 pages long. Andrea Phillips, running in the northern Ankeny district, has 273 pages’ worth of donations.

It’s hard to overstate how unprecedented these totals are, as small grassroots donors in Iowa and across the country have increasingly turned their focus to critical statehouse races. In past cycles, party leadership might set a goal of $75,000 or $100,000 for a challenger candidate to raise on their own.

It should be concerning to Republicans that Bobby Kaufmann was the only one to raise over $100,000 in a targeted swing district. Republicans are relying far more on big checks from PACs and wealthy donors to fuel their campaigns. Democrats’ small dollar base can get hit up more often.

What’s even more impressive for Democrats is the number of candidates in non-targeted Republican districts that have raised serious cash. Sara Huddleston in Storm Lake’s HD 11, a district that Trump won by 34 points, raised a very impressive $72,000. Christina Blackcloud, running in a rural, Central Iowa district that Trump carried by 25 points, brought in $69,000. Both Shelley Stotts in the Boone-based district and Debra Jensen in Northern Iowa’s Estherville/Forest City-based district brought in $54,000. It seems like Democratic small donors are particularly excited to back female candidates and those who are people of color, even if they’re running in challenging districts.

In most cycles, it’s incredibly difficult for candidates in Republican-leaning or deep-red districts to raise enough money to do anything beyond some fliers and yard signs. These totals are enough to put together a real program of mail and digital ads, enough to reach a sizable number of voters, even if the party itself doesn’t come in with hundreds of thousands of dollars of ad spending.

That gives these red-districts Democrats at least a chance, especially with their opponents not raising or spending much. If 2020 turns out to be a blue wave year, you could see one or two win in a surprise upset.

Now let’s turn to the in-kind spending, which tells us where both parties see their best pick-up opportunities. And here’s the list with only districts where there’s significant in-kind spending from one or both sides to give you a sense of how the parties compare in some targeted districts: 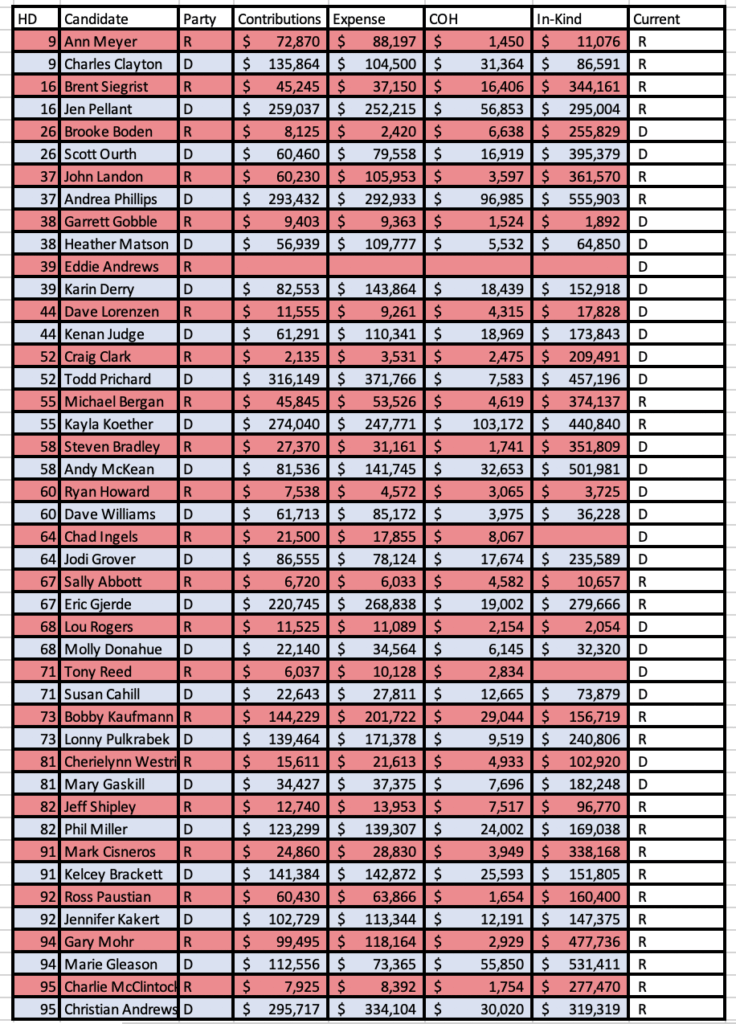 Republican Eddie Andrews’ row is missing because he inexplicably did not file a finance report on time.

If we look past some of the smaller in-kind expenditures for just-to-be-safe districts, Democrats are targeting 11 Republican-held seats and defending 8 Democratic districts with significant spending, or 19 overall. Republicans, meanwhile, are targeting just 5 Democratic-held districts and defending 9 of their own seats, or 14 overall. (Chad Ingels updated his report after we made these charts — he has had $192,000 worth of in-kind spending. We’ll update ours once we have a few spare minutes.)

The most expensive House races in Iowa so far are Ankeny’s HD 37 (Phillips vs. Landon), Bettendorf’s HD 94 (Gleason vs. Mohr), Decorah’s HD 55 (Koether vs. Bergan), and Jackson/Jones counties’ HD 58 (McKean vs. Bradley).

Democrats have the financial advantage in nearly all of the top ten races.

For Democrats, half of their top six spending races are defends, half are targeted flips. Republicans are actually making a more concerted effort this year in districts that Trump won big in that are currently held by Democrats. That’s causing Democrats to spend heavily to protect incumbents like Prichard, Ourth and McKean. However, Democrats can’t get to a majority without winning some Trump districts, and their incumbents should be strong enough to hold onto to these seats, even if it means they have to spend to do so. The defense spending doesn’t seem to be limiting Democrats’ options. They’re on offense in 11 districts, a significant expansion of the map from 2018 and a rather broad investment given they need to flip four seats — possibly more if they lose one or two. This strategy gives Democrats plenty avenues to 51.

Prichard’s large expense is due to his Northern Iowa district being split between two media markets. Andy McKean is in the same situation with two TV markets.

Could Democrats add another seat or two to their top targets if they didn’t have to defend these? Perhaps, like putting more money in Muscatine’s HD 91 (that seat has frustrated Democrats for years, though) or to Boone’s HD 47. But overall, this is a major expansion of the map for Democrats, and they seem to have learned from past years’ mistakes by not taking some seats for granted. Better to overspend in some districts than have a surprise loss like Fairfield’s HD 82 in 2018.

The fiercest battles are being fought in Ankeny, Decorah and Bettendorf, places where Democrats see a strong pickup opportunity, but it’ll still be a close election night result.

You might wonder why the spending for Phil Miller in Fairfield’s HD 82 is so comparatively low — that’s largely because the Ottumwa TV market is so cheap. Democrats are still playing big there and hope to win back the seat.

Some of the Democratic defend spending is aimed at securing first-term incumbents, with sizable expenses for Kenan Judge and Karin Derry, and a moderate in-kind expense for Heather Matson. They’re putting in just enough money to establish Sue Cahill to hold Marshalltown’s HD 71.

While Republicans are pressuring Democrats in several districts they didn’t contest in 2018, most of the GOP’s spending is going to defend their incumbents and open seats. Nothing is left over for just-to-be-safe spending to protect incumbents who could get caught by surprise. 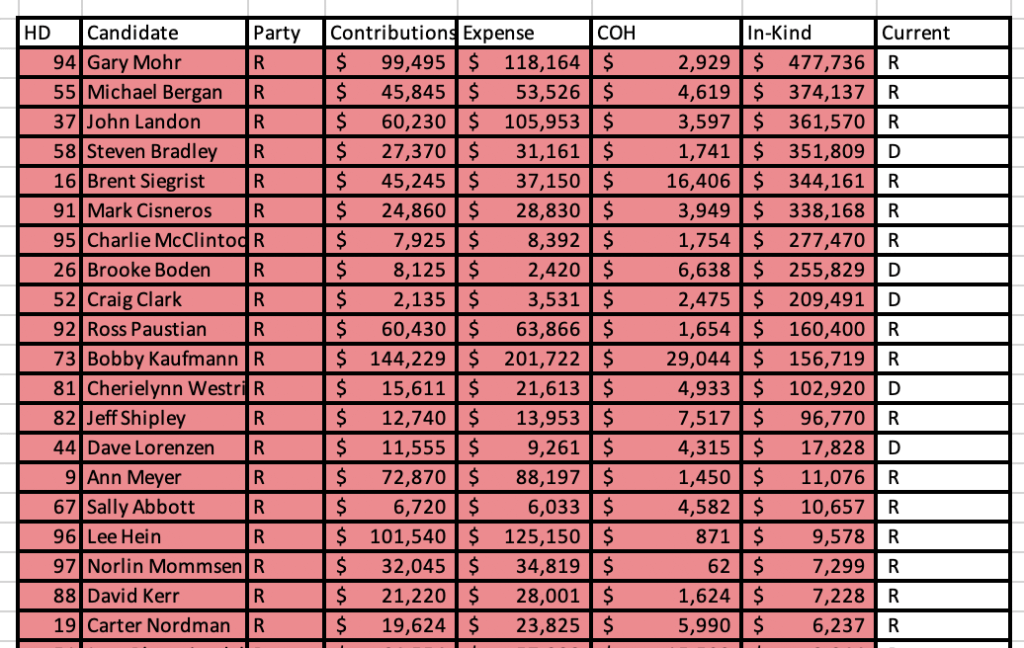 As you can see, their in-kind spending is much shorter, and it drops off after Jeff Shipley.

Six of their top seven spending districts are to protect their own seats, while they’re making a strong play to win back HD 58 after McKean switched parties last year. They’re putting in quite a lot to Muscatine’s HD 91, where Mark Ciseneros is trying to hold an open GOP seat, even though Democrats are spending about half as much here.

Again, Ingels’ updated report shows $192,000 of in-kind spending. Both parties are spending heavily there but not going all-out, so it’s hard to figure out what’s happening in the Northeast Iowa rural district that’s an open Democratic seat.

There are major red flags for Republicans in some of their offensive districts. Take a look at Charlie McClintock, Brooke Boden and Craig Clark’s fundraising. All are under $10,000, despite being in top-targeted districts. While these candidates don’t necessary need to raise huge funds on their own if the party is going to come in to help them, lackluster fundraising usually signals other problems within a local candidate’s campaign. If they’re raising barely any money (Clark’s $2,100 is really pathetic), it makes you wonder if they’re knocking many doors or doing the other aspects of a campaign well.

For a former speaker of the Iowa House, Brent Siegrist also sure hasn’t raised much to hold onto the Council Bluffs seat.

While Republicans put about $100,000 into both races, it appears the party is pulling out of the two Southeast Iowa races. TV buys look to have stopped for both for Cherielynn Westerich’s challenge to Mary Gaskill and Jeff Shipley’s defense of the Fairfield seat. It also appears that Boden’s TV buy has been reduced for the Warren County seat challenge.

Where Republicans are not spending is also noteworthy. They have not put any money in to defend first-term incumbent Ann Meyer in the Fort Dodge seat. It doesn’t look like they’re contesting any of the suburban seats that flipped in 2018 that Democrats are spending money on. Nor are they making a play for the open Marshalltown seat.

Again, you can view our full spreadsheet here. As always, when data entering this many numbers, there could be a small error here and there — let us know if you’re aware any.