As a respected Fort Dodge community leader, Charles Clayton is well-known for helping countless at-risk students with programs and mentorship as they try to survive adversity. The work is deeply personal to him, as he knows the danger of youthful mistakes — Charles received a felony conviction for shooting a gun into the air when he was young, but turned his life around to help others in need.

Today he announced his plan to take that service to the Iowa Statehouse, by running for Fort Dodge’s Iowa House District 9. The timing is particularly meaningful given that Charles became more engaged years ago after getting his voting rights restored — just yesterday, Gov. Kim Reynolds’ executive order restored those same rights to tens of thousands of Iowans.

Clayton, the co-founder and executive director of the non-profit Athletes for Education and Success (AFES), will run as a Democrat to take on first-term incumbent Ann Meyer. He will be placed on the ballot in November after a special nominating convention of local Democrats on Thursday night — there was not previously a Democratic competitor in the race.

“I’ve dedicated my life to helping kids in Fort Dodge and making our community a better place to live. I’m running for the Iowa House because it’s time for action — to create more opportunities for kids, to make sure no family has to choose between health care and paying the rent, to end social and racial inequalities that leave too many behind,” Clayton said of his run. “I’ll be a public servant, not a politician.”

For the larger picture of control of the Iowa Statehouse, this adds a swing district back to the battleground map for Democrats, giving them extra options in their quest to win at least four Republican-held districts.

The seat was held by Democrat Helen Miller — who now serves on Iowa’s Parole Board — for eight terms, and was the only House district in the state to flip from blue to red control in 2018.

The district also voted for President Donald Trump by 16 points over Hillary Clinton in 2016 after Barack Obama won it by nearly 10 points over Mitt Romney in 2012. It had traditionally been one of the few bases of Democratic support west of I-35. 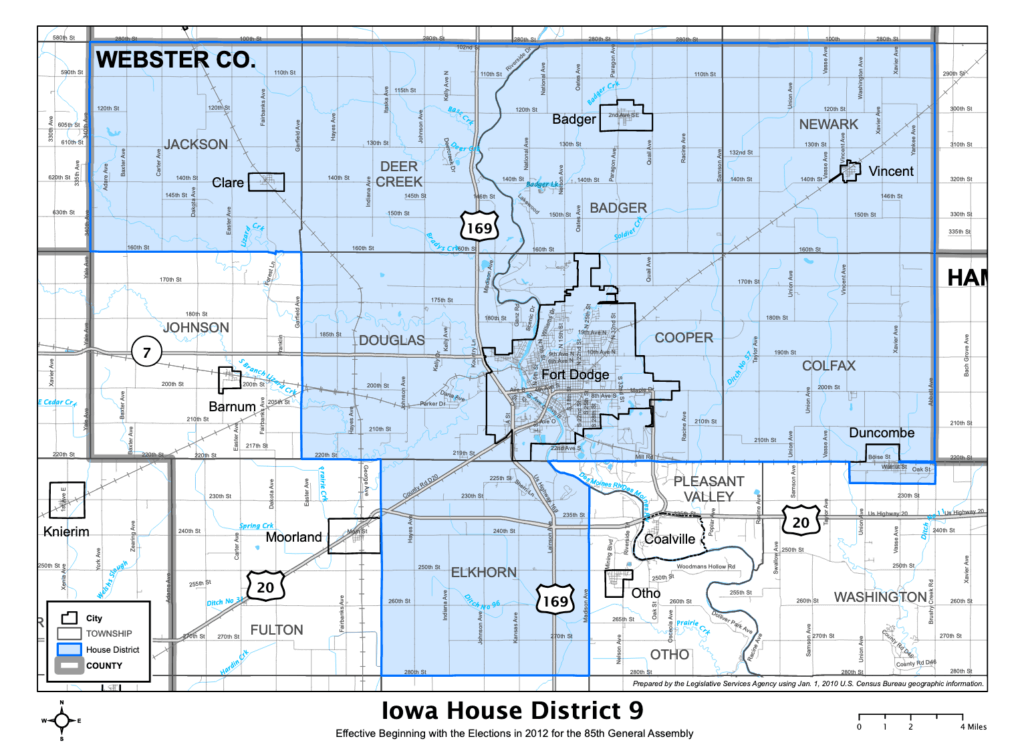 Meyer narrowly won the 2018 race for the seat — beating infectious disease doctor Megan Srinivas by about three points. Srinivas decided not to run again in 2020, leaving Meyer running unopposed until Clayton’s announcement Thursday for the seat.

Clayton said he was approached by the party recently about a potential run and was encouraged after discussion with family, friends and prayer to consider.

“Sometimes God leads you to a door whether you knock on it or not. And I probably need to open this door up and see what’s inside,” Clayton said in an interview with Iowa Starting Line.

“Sometimes as minorities and blacks in Iowa, if not around the country, the perception is we don’t get asked, we don’t get included. We don’t get to take a part in certain things. And I think that if democracy is going to work in America, then everybody needs to be included. But everybody also needs to participate. So I really can’t turn this down.”

Clayton has been working to include everybody in the Fort Dodge community since around 2004 when he began AFES, a non-profit after school program for mostly at-risk children. It includes sports teams, mentoring groups, drumline groups, education and cultural opportunities. AFES’s goal is to keep children excited about school and their futures.

The organization is successful in the Iowa town of 25,000 —they see about 100 kids a day, Clayton said, and have partnerships with local school districts and the police department.

“If a kid is acting out to the point that maybe he’s going to be removed, suspended, expelled or a detention … they actually call APHIS so we can try to divert and avoid that,” Clayton said. “If [the police are] going to arrest a kid for, let’s say, on a bike, stolen a candy bar, two kids get into a fight egging someone’s house, simple misdemeanor stuff. They don’t press charges. They just send the kids to us.”

Clayton said that it’s helped about 15 students go to college on athletic scholarships and has helped a number of others with some scholarship money. One of Clayton’s own grown sons works full time with him at AFES while the other two currently play college basketball.

But before Clayton began AFES, he himself struggled to stay on track. After spending a year playing basketball at junior college, he came home and found himself in trouble — Clayton was arrested for shooting a rifle into the air in a residential neighborhood on New Year’s Eve in 1992. No one was injured during the firing, but Clayton received a felony conviction and completed his sentence.

“After that, it kind of was my wake-up call to just get my life together and kind of live up to my potential for my mom, who was a single mom for most of my childhood, all the hard work she put into working for me to live that style of life and to turn my life around and do the right thing,” Clayton said.

He started to work in youth shelters, the YMCA and different treatment centers, and received his AA in criminal justice from Iowa Central Community College. He then worked as a teacher’s associate at Fort Dodge Middle School, assisting kids with behavior disorders while earning his bachelor’s degree from Buena Vista University before starting the AFES — which started as a basketball camp and quickly grew with help from community partners.

Clayton said he became an active voter as soon as he completed his felony sentence and noted the importance of Gov. Kim Reynolds’ Wednesday issue of an executive order restoring voting rights of Iowans who have past criminal convictions.

“Once my voting rights were restored, I automatically started voting and getting involved in things because I think our democracy only works when everybody has an opportunity to participate — felons also,” he said.

In the Statehouse, Clayton said he’ll not only focus on criminal justice but education, employment opportunities, health and mental health issues and other social justice concerns.

“I think I’ve seen the struggle. I’ve seen through a different lens and have an in-the-trenches perspective than probably a lot of politicians don’t have,” he said.