After the news broke tonight of the death of Supreme Court Justice Ruth Bader Ginsburg, Iowa Sen. Joni Ernst took to Twitter to express her condolences for the trailblazing jurist.

“My prayers go out to the family of Justice Ginsburg. She was a pioneer who paved the way for women across America,” Ernst wrote.

Her campaign, however, had been working on something else.

A Starting Line reader sent us a text they received from Joni Ernst’s campaign fundraising on the Supreme Court about ten minutes after Ginsburg’s death was announced.

“The next Supreme Court Justice will be decided by Dems if we lose the White House and the Senate. Help hold the line,” it read. 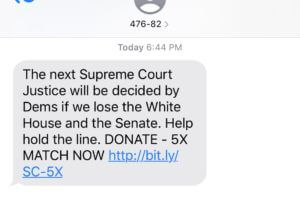 That linked to a fundraising page for Ernst, which also contained the line, “The future of the Supreme Court is on the LINE!”

It should be noted that text messages like these are often scheduled by campaigns, and it’s entirely possible — if not likely — that this was a routine fundraising text already planned. Most campaigns and their staff will think to check what they have scheduled to send soon after tragic, breaking news like a major death, but that did not happen in this case if it was already planned.

However, a fundraising email sent by Ernst’s campaign at 7:08 p.m., a little over a half hour after the news seemed directly tied to Ginsburg’s death.

“BREAKING: the future of the Supreme Court is on the line,” read the Ernst campaign email, as reported by Radio Iowa’s Kay Henderson.

@joniernst campaign at 7:08pm sends fundraising email with subject line, “BREAKING: the futureof the Supreme Court is on the line”

“The next Supreme Court nominee will shape major decisions for decades to come,” the Ernst fundraising email read. “If Conservatives fail to protect the White House and the Senate majority in November, we will place the power of the next nominee into the Left’s hands.”

“We all remember what happened last time. The Democrats launched a full-blown smear campaign … We can’t afford to get complacent,” it continued. “If we do, the Left will have the power to choose the next Supreme Court nominee, and our very way of life, our Constitutional values, and the future of our country will be at risk.”

This email is also long enough that it’s unlikely the campaign wrote up the entire thing on a Friday evening. But the headline of “BREAKING” certainly appears to be an intentional reference to Ginsburg’s death. If not, the campaign also failed to stop this scheduled email, despite having more time, even after the initial texts went out.

UPDATE 9:34: Joni Ernst sent out a statement this evening about the email, saying it shouldn’t have been sent and taking responsibility.

“This email never should have gone out,” Ernst said in a statement. “Though I never saw it, it was sent out under my name and I take responsibility for it. Tonight, my prayers are with the family of Justice Ginsburg.”

The Supreme Court vacancy will likely factor significantly into Ernst’s reelection race, already a very tight race with Democrat Theresa Greenfield. Ernst made national news in July when she stated during an Iowa Press interview that Donald Trump should fill a Supreme Court vacancy any time this year, even if Trump loses the election and Republicans lose their Senate majority. As for why it was different this time than when Republicans blocked Barack Obama’s nominee Merrick Garland, Ernst stated that it was simply because Republicans hold power now.