Setting up for the largest Iowa Democratic event to date was not unlike preparing for a theater production.

There’s a backstage, a wing, green rooms, changing rooms and, of course, the big stage where 14 presidential candidates will stand before an audience of more than 13,000.

“It took 63 people and 24 hours to get from hockey to this,” said Jonah Hermann, an Iowa Democratic Party spokesperson. 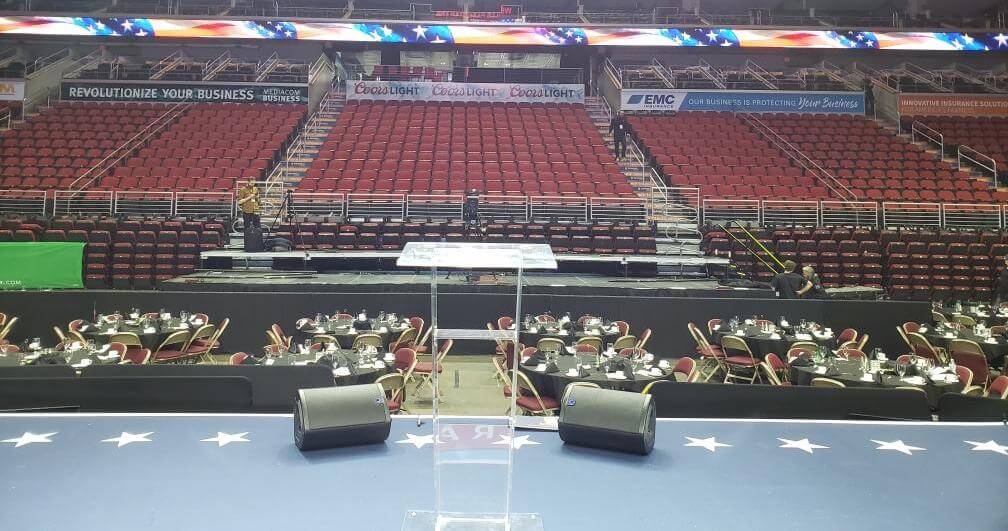 The Liberty and Justice Celebration is the biggest gathering of Democrats and presidential candidates until the National Convention next year in July. The program starts at 6:30 p.m. at Wells Fargo Arena in downtown Des Moines.

Organizing an event like the Liberty and Justice Celebration took months of work.

Hermann said the IDP team looked at Wells Fargo Arena for the first time in May. They did a walk-through and had to decide how to turn the all-purpose event center into a hot spot for the last big event before the caucuses.

“We really wanted to make sure this event space had the same feeling as the caucus,” Hermann said. “We’ve leveled up here and made it bigger and better than before.”

On the floor around the stage, tables are set up for 1,700 people to eat dinner, equating to about 5,000 pounds of food. In the stadium seats above, 11,000 people will fill in the rest of the audience.

The stage itself, and the catwalk leading to it, is covered in a 1,400 square-foot carpet custom-made for the IDP. Hermann said it weighed 763 pounds. Behind the stage, there’s an 86-foot-long LED wall.

Every candidate has a green room where they can prepare for their moment onstage and talk with their campaign team and guests. Hermann said some of the green rooms are meant to be used that way, and some are locker rooms the IDP repurposed for the candidates.

“It was very important that everyone had a dedicated space to get away,” he said.

In the hall outside the green rooms, signs point the way to the stage.

Like any show, the candidates have a spot in the wings where they can see what’s happening on TV screens on the other side of the curtain.

The IDP team didn’t just have to think of the candidates. More than 300 reporters signed up to cover the dinner, so preparations were made for the media, too.

The state party worked closely with the campaigns to coordinate when and where the candidates would enter the venue, Hermann said. The priority was always safety and efficiency.

In the past, the Liberty and Justice Celebration went by different names and happened in different places, like HyVee Hall. While the IDP looked for a venue this year, they realized Wells Fargo Arena was the only practical option. 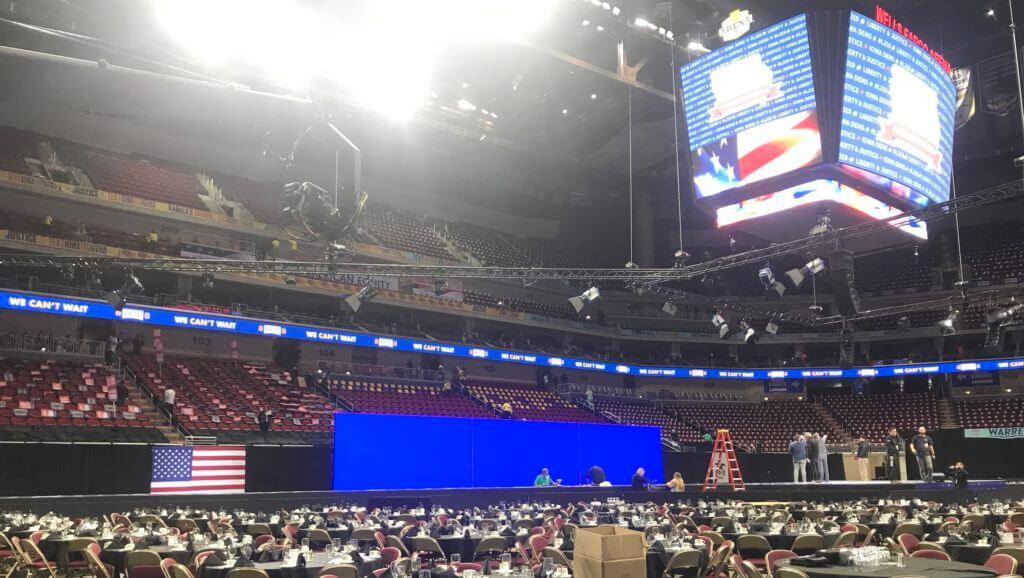 When planning, the IDP took into account the size of the September Steak Fry, when more than 12,000 tickets were sold, and the fact several candidates turn out crowds that number in the thousands.

With so much effort going into the setup, Hermann said the IDP also hired a production company.

And by 4:00 p.m. today, after six months of planning and 24 hours of building, Wells Fargo Arena will have transformed from a concert venue to the place where 14 presidential candidates will seek to make their breakout at the last big event of the primary.

“[Trump] and the rest of the Republicans should be scared of the momentum behind our party,” Hermann said.