“About two years ago, I walked into a doctor’s office with a nagging cough and walked out with a stage-four cancer diagnosis,” said Laura Packard, a cancer survivor and health care activist. “But I’m still here today because the Affordable Care Act saved my life.”

Packard is now in remission, but says she couldn’t have afforded her six months of chemotherapy and month of radiation treatments without the Affordable Care Act – the one thing keeping her insurable.

“If my cancer returns, I will be bankrupt or dead without good health insurance,” explained Packard. “That’s why we’re going around, state to state, to let people know about the severe threat that we’re all under. This court case would abolish all parts of the Affordable Care Act, endangering 130 million Americans with pre-existing conditions like me.” 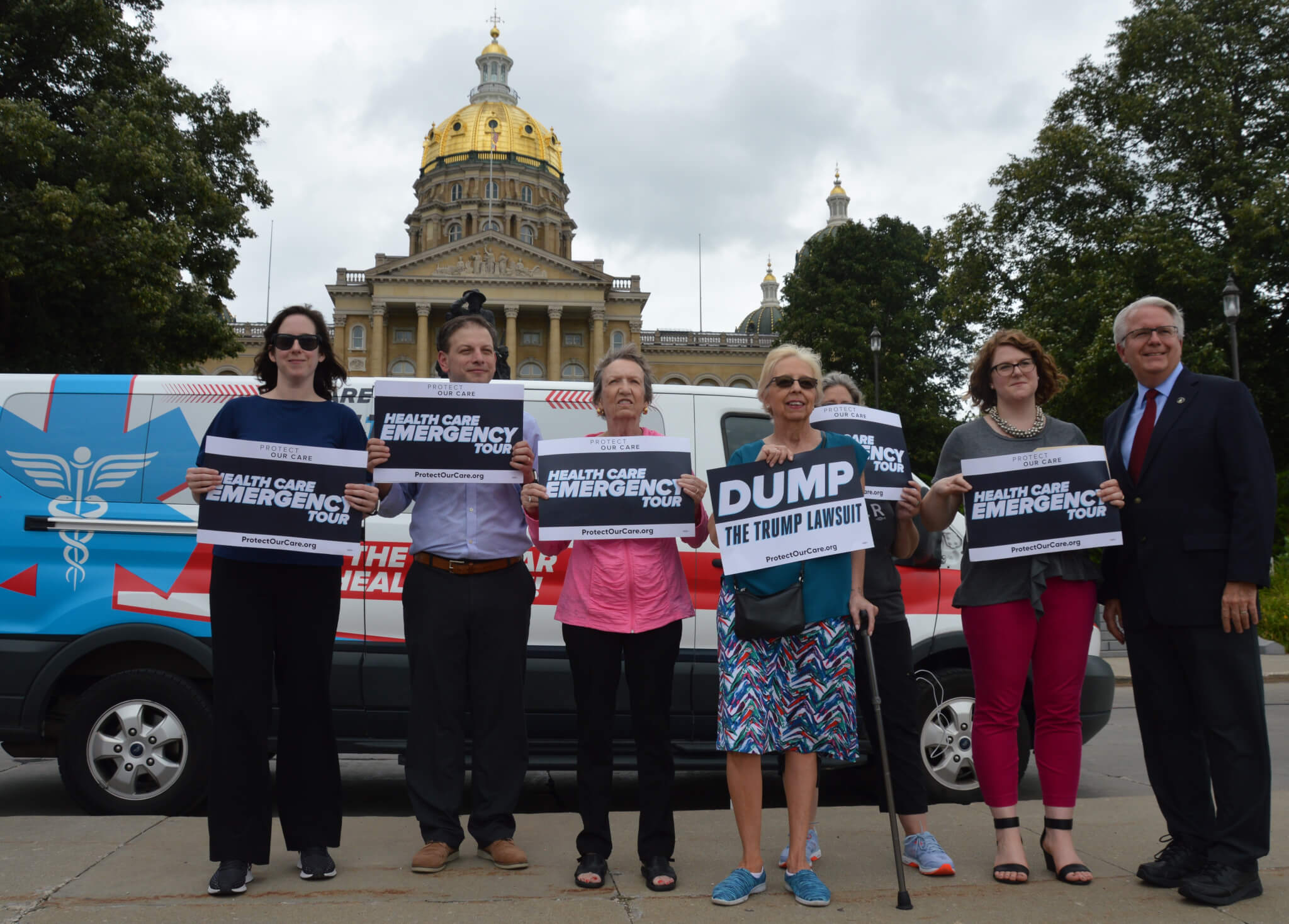 Packard was outside the Statehouse Monday afternoon with Protect Our Care, Progress Iowa, Planned Parenthood and State Representative John Forbes, all of whom came to speak up and put public pressure on Sen. Joni Ernst for her record of consistently voting against the ACA in D.C.

“Joni Ernst has voted four times to repeal the Affordable Care Act, and we refuse to sit by and pretend she’s ‘Iowa Nice’ while she threatens our lives,” said Matt Sinovic, the executive director of Progress Iowa. “Phony Joni Ernst comes home and puts on a good front, but the minute she’s back in D.C., she votes with special interests and pockets their campaign cash. Iowans have had enough, and every one of us should be knocking on her door to give her an earful.”

John Forbes, a Democratic legislator from Urbandale, spoke about Sen. Ernst and the Republican Party as a whole’s stances on health care issues.

“The contrast could not be more clear, with Republicans wanting to kick families off their coverage, and Democrats here in Iowa like Cindy Axne in Congress fighting to protect people with pre-existing conditions,” said Forbes. “We deserve the best health care system possible, not to live in constant fear that our elected officials will undermine our coverage or leave us without the ability to see a doctor or pay for medicine without going into bankruptcy.”

Forbes also talked about expanding Medicaid in the state, which he supported and Ernst opposed, adding more evidence to the contrast.

Erin Davison-Rippey, executive director of Iowa, Planned Parenthood North Central States, spoke about Ernst, the Trump Administration, and the Republican Party’s attempts to dismantle the ACA and defund Planned Parenthood across the nation.

“Reproductive health care is the foundation of freedom and independence for women, and these attempts to overturn the Affordable Care Act put that freedom at risk,” said Davison-Rippey. “Women need the ability to decide when and whether to have children — otherwise we can’t control any other aspect of our lives — like getting an education, starting a business, or running for office. We know this, and so does the Trump Administration.”

The Protect Our Care bus tour will continue until the end of August. The ‘Care Force One’ bus will be in Cedar Rapids, Iowa, on Tuesday as it keeps trucking along on its tour from Las Vegas to Atlanta.