A quick review of the Facebook Ad Archive shows Blum continuing to pay for Facebook ads over the past two months. The “paid for” line simply lists “Rod Blum,” as opposed to the “Blum For Congress” disclaimer used back during the election. These ads also come from his former official Facebook page, Congressman Rod Blum, and not his old political account.

The ad buys are relatively small, less than $100 and reaching somewhere between 1,000 and 5,000 people each. In January, Blum boosted a post he made that was critical of socialism, and one that touted economic numbers under Donald Trump, which also had a picture of him and Trump. 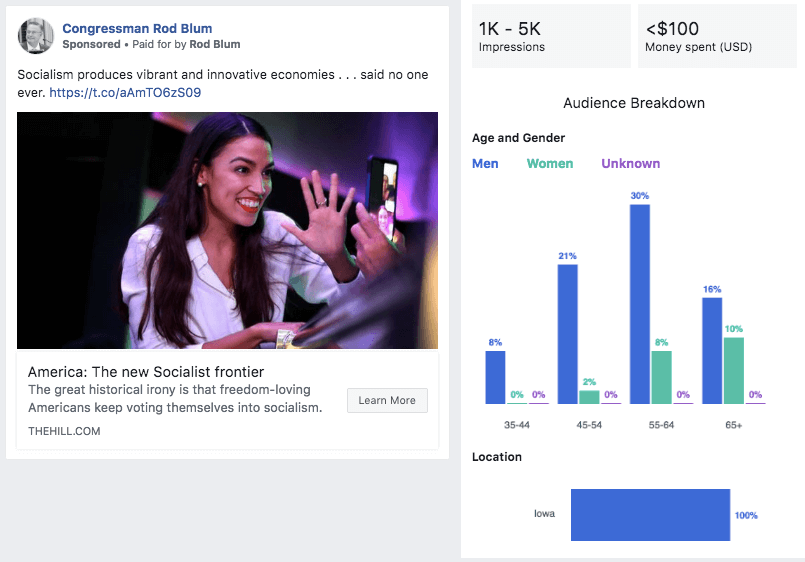 This month, he’s running one in which he jokes about a nasty message he got from what may be a former constituent. 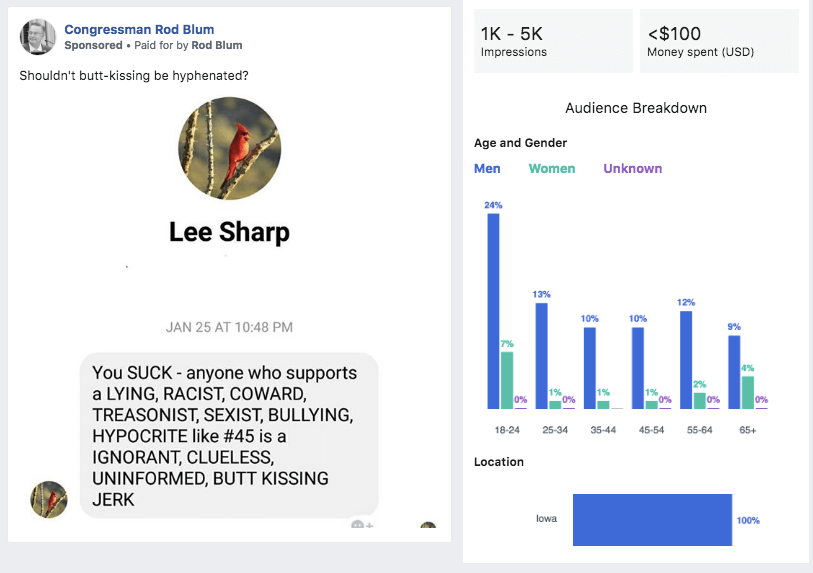 And one more in which he accuses Democrats of a bizarre conspiracy theory in which they oppose a border wall in order to gain votes from non-citizens. During the campaign, Blum ran one of the most blatant race-baiting ads in the country against Finkenauer. All of this would be just a mildly interesting look into a former congressman’s life after public service, but there is still a chance that Blum may seek a return to his 1st Congressional District seat. His recent Twitter activity doesn’t appear much different than if he were still in office or a candidate. He’s still taking media interviews, traveling the district, and commenting on the political news stories of the day, including giving praise to Trump.

Republican State Representative Ashley Hinson made news several weeks ago when she confirmed she was seriously considering a run of her own for the 1st District. However, she’s been rather quiet on that front ever since, and we’re nearing the point of when she hinted she might decide by.

A Blum return would certainly cause complications for Hinson, even though she appears to be national Republicans’ top choice. Hinson does enjoy a significant name ID advantage in the district from her time as a reporter and anchor for KCRG-TV. Still, going up against a former congressman, especially one whose personality connected well with the Trump voter base in Eastern Iowa, would set up a messy primary.

Also of note: some might not appreciate that Blum is using his old congressional account for running ads. Taxpayer dollars and the simple official title of congressman help builds up one’s federal Facebook account while in office. Records show Blum’s office spent $193,991.99 in non-franking mail during the 2018 cycle, some of which may have been spent to build up his Facebook page.