What’s the proper role for a school administration in public elections for their governing board, whether it be for a community college board of trustees or a school board? For publicly funded institutions, the law is pretty clear: neutrality. You wouldn’t think to see the superintendent of the Des Moines Public Schools out campaigning for specific candidates to sit on the board that oversees him. But supporters of two candidates who are challenging incumbent DMACC trustee board members think the community college went too far this year in indicating their preference.

It’s the latest flash point in the ongoing fallout over the Iowa Legislature’s gutting of the collective bargaining law earlier this year. Public sector workers are increasingly looking at local school and college board elections to make sure they have a voice on the governing bodies that decide how fairly employees are treated and paid.

Several of the seats on the nine-member Des Moines Area Community College Board of Trustees are on the ballot during this Tuesday’s school board elections. Districts for the board cover wide swaths of Central Iowa, stretching from Pella to Ames to Carroll. Former State Representative Joe Riding is challenging incumbent member Joe Pugel in District 5, which covers eastern Polk County and most of Jasper County. Attorney Brent Hinders is running against incumbent Kevin Halterman in District 4, which contains much of Madison, Warren and Marion counties.

DMACC faculty members and their unions took issue with the board earlier this year when they couldn’t get a contract extension before the new collective bargaining laws took effect.

“I used to push for multi-year contracts,” DMACC President Rob Denson told Starting Line, adding that he hasn’t since 2008. “But this year, the board and I agreed, we can’t do a multi-year contract in tough budget times because we don’t know what the Legislature is going to do. We had to cut $800,000 out of this year’s budget already.”

However, many other districts around the state that were facing difficult and uncertain budget circumstances were able to extend their employees’ contracts before legislative Republicans passed a bill that restricts their ability to bargain in the future. Nine community colleges and over 200 school districts passed contract extensions early this year. That in part pushed both Riding and Hinders to run.

The administration’s reaction to those challenges is what has some people concerned.

When the faculty union sent out a questionnaire to all the board candidates, Denson sent around an email with the college administration’s stance on each of the questions.

“You received the following questionnaire from our Faculty Union,” Denson wrote. “Generally, the Board considers input from the President and Administration in matters related to the College. Your response to the Union might include whether you agree or disagree with these recommendations. I would appreciate a copy of your response to the Union.”

Denson’s replies included some information and some opinion on how the administration felt.

“DMACC should continue on its current path, successfully dealing with issues as they arise,” read one response to a question of how DMACC should maintain their current success. “We have a great team and good processes in place, and our stakeholders of which the faculty are one group.”

Many of the union’s questions revolved around collective bargaining issues, and how the new law would impact negotiations. One asked, “How would you as a board member plan to communicate with faculty for their feedback/input with the expansion of the board’s new role?”

“There is no new role. We have a collective bargaining process that is specific,” Denson wrote in response. “The Administration works with the Bargaining Team of the Union and presents a recommendation to the Board. We believe the Board members and Faculty should not attempt to circumvent the process. The practice of the Board is to work only through the Administration and not micromanage DMACC.”

“We don’t take a position,” Denson told Starting Line. “We get so little money from the state compared to the other universities … we just lobby for state funding. The Legislature appreciates that, it keeps us from being drug off into other issues. In this particular case we let the unions deal with it because it was direct to them. We have had a great relationship with our unions historically, and I have stood up in front of my faculty staff every year and tell them to join the union.”

But union members were perplexed by Denson’s response to the faculty union’s questionnaire, noting they hadn’t seen that kind of involvement from a school administration before for a campaign survey. The biggest concern was that these board members are elected by the public, with the ability to hire and fire a school president, were getting this level of guidance from someone they’re supposed to be overseeing.

Denson explained that he hadn’t sent out a response like this to a survey, but that was largely because there have very rarely been contested races for the DMACC board.

“We have several candidates with no prior experience with DMACC, so they wouldn’t have known the answers or the context,” Denson said. “I didn’t mean to suggest an answer, but I said here’s what the college feels on the questions … I’ve never done it before, but the issue hadn’t come up before.”

Another concern arose over some social media posts by DMACC. A third candidate in the District 5 race, Jennifer Pryke, dropped out of the race in August, endorsing the incumbent Pugel as she did so. DMACC sent out her press release of her withdrawal, including the part where she endorsed Pugel and included a picture of Pugel holding one of his yard signs. A Facebook post from DMACC’s account included the text “Vote for Joe!” with the accompanying press release. 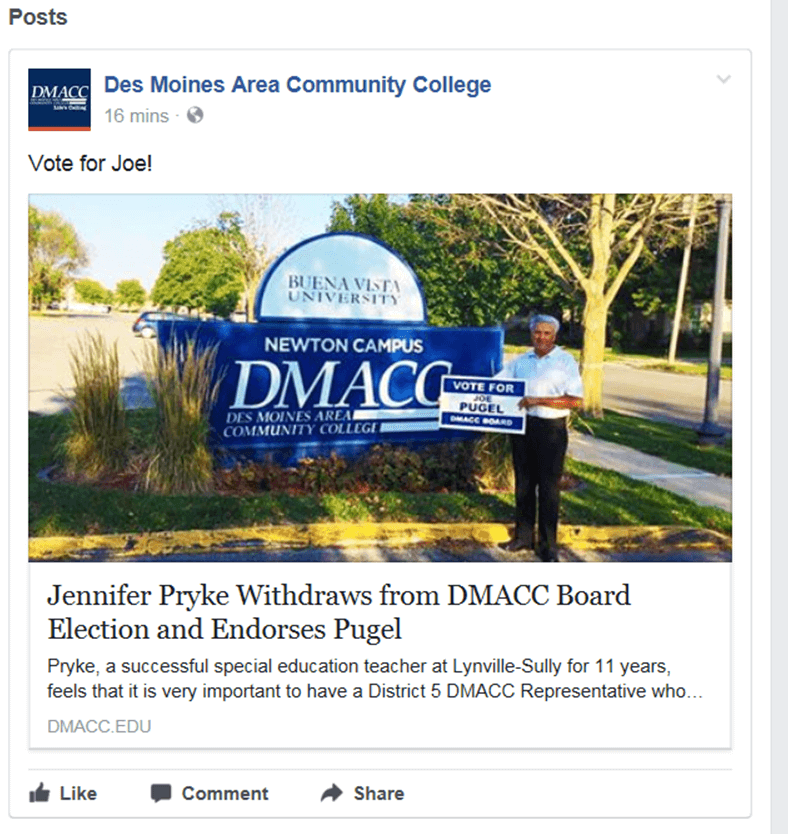 “We screwed up there,” Denson admitted.

Denson explained that he had met with all the new challenger candidates and provided them with information about DMACC’s budget and policies. Pryke called Denson about a week after to say that she wouldn’t have the time to commit to all the board’s meetings and was going to drop out of the race. Denson asked if she was going to back Riding or Pugel, and agreed to her request to send out a press release on her withdrawal.

“We’ve got a marketing department, we’ve got access to all these newspapers, and she asked me and I agreed to just send them out,” Denson said. “So we sent it to the normal people we send to, then marketing, as they always do, put it up on our media. The ethics commission called me and we jerked it down right away. I saw it as just a press release, they saw it as an endorsement. Well, it was an endorsement, but not by us, it was by Jennifer. But clearly it was a grey enough area that we jerked it down right away. We can’t do anything that shows preference one way or another. We’ve got to work with who wins.”

The election for the DMACC Board of Trustees will be held on Tuesday along with all the local school board races. Whether any of this impacts Riding or Hinders’ challenges to Pugel and Halterman is yet to seen, but it’s one more story in the continuing fallout of Iowa’s collective bargaining changes. When unions have gotten more involved in elections to ensure their faculty members still get fair contracts, they’ve gotten both subtle and not-so-subtle pushback from administrations.

“We have had a strong board,” Denson added. “I don’t know if anyone is disappointed with the success that DMACC has had the last 20 years or so … We’re getting all kinds of national recognition. People can vote in whoever they want, but this particular board has done a great job and both Joe Pugel and Kevin Halderman, the ones that ISEA targeted, they’ve been president and vice president of our board for years, and they’re doing a good job. The citizens of those districts will make the final decision, but it’s not like we’ve got an issue with the current board members.”

1 Comment on "Did DMACC Get Too Involved In Trustee Board Race?"