The new front in the Donald Trump-led effort to deny the results of the 2020 election has officially come to Iowa.

That’s thanks in part to a recent high-profile visit to the state by Dr. Douglas Frank, a former math teacher from Ohio who now travels the country on a crusade to “prove” the election was stolen and rally disillusioned Trump voters to his cause.

He spoke to a Trump-inspired Iowa grassroots group called “Iowa Canvassing” late last month at the Heartland Acres Event Center in Independence. During a 3-hour presentation, he galvanized the crowd of close to 100 attendees in their mission to uncover widespread voter fraud in the state.

Frank also wanted to teach them how to check the results for themselves—through persuasion to the point of annoyance, and even by suing your county auditor if necessary (more on that later).

“You need to be able to explain it to your friends,” Frank told the crowd. “I need you to see why and how—and then you’ll be part of it.”

Nothing wrong with checking things out for yourself, of course. But through the course of checking out Frank, it appears his broader goal is to undermine faith in America’s elections system through vague accusations and scary-looking graphs that he assigns all-encompassing conspiracy theories to.

But while Frank told the crowd that every single state shifted a full 10% in 2020 due to phantom ballots, the best Frank can muster from his slides is that around 44,000 of Iowa’s more than 2 million voters in 2020, or 2%, were “suspiciously” added and later removed from the rolls (this can easily be explained by Iowans newly registering to in the lead-up to the election).

Frank isn’t alone in peddling this scheme across the country. Maybe you’ve heard of MyPillow CEO Mike Lindell? He and Frank teamed up on films purporting to show such fraud, “Absolute Proof” and “[S]election Code,” and Frank noted he’s flown around the country in Lindell’s private jet. 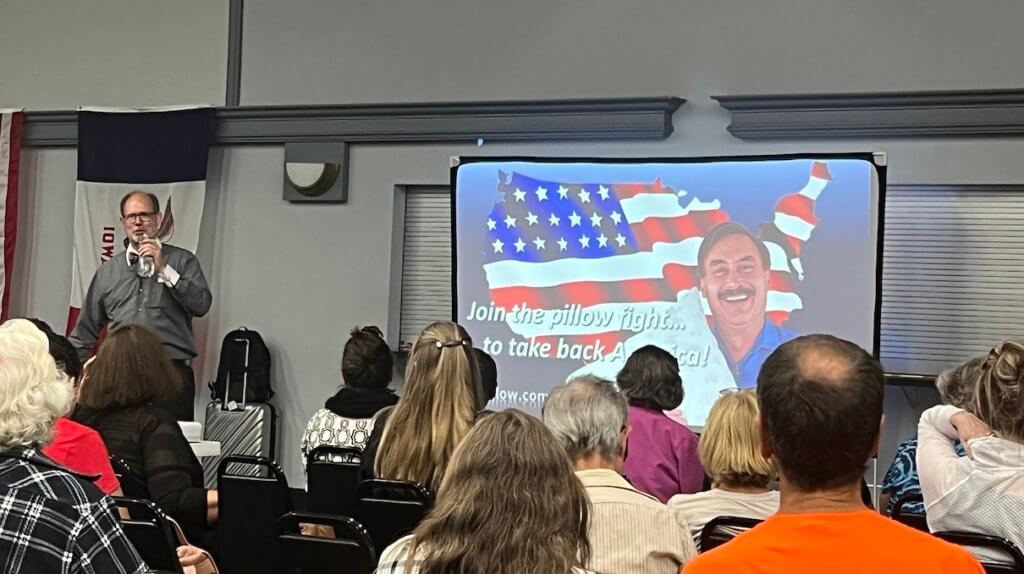 That’s inspired other groups, like the Iowa Voter Integrity Group as well as Iowa Canvassing, both of which brought Frank to Iowa and are trying to carry out his wishes.

So if someone knocks on your door in the coming weeks, wanting to know if you’re the person who voted in the last election, and you say “yes” that was you, and then they look disappointed and leave—well, this is why.

Yes, yes he did. But let’s not skip ahead.

If you haven’t heard it before (because you’re “not listening to the right news,” according to Frank), the “massive election fraud” scenario goes roughly like this:

A coalition of philanthropist and favorite-bogeyman-of-the-right George Soros, members of the now-defunct Hillary Clinton campaign, and the Center for Tech and Civic Life—an organization that trains election officials funded in part by Facebook’s Mark Zuckerberg—are adding “phantom voter” ballots, both by mail and electronically, at the last minute to all elections around the country. And local and state officials are either ignorant of this or allowing them to get away with it.

But that sounds pretty far-fetched if you pay any attention to who’s in charge, and has been in charge for years, in Iowa. (Or Soros and company are doing a TERRIBLE job here.)

Iowa is completely controlled by the Republican Party, from the legislature to the governor’s mansion to Congress. Plus, we actually increased our vote share for Trump between 2016 (51.1% of the vote) and 2020 (53.1%).

So Frank’s pitch already falls apart, at least in Iowa, right there. But that’s only if you think Frank’s goal is to elect more Republicans, or even to elect Trump and Trump acolytes exclusively.

“I think Iowa is late to the game because they have been under the mistaken impression that their elections are OK because Trump won there,” Frank posted to his Telegram page, which has more than 31,000 subscribers. “I hope that this common misconception is finally dispelled.”

The point, therefore, is to cast doubt over the whole enterprise of voting nationwide—a scenario that would likely usher in an autocratic era of Putin-like forever-leaders.

Specifically, a European-style paper balloting for every election, with very few people allowed to vote by mail, and no electronic voting machines to help tabulate or keep voter rolls at all.

Even if electronic machines aren’t connected to the internet (they are not), Frank said they can be “bugged,” brandishing a device he says picks up “frequencies” of these bugs inside machines. (Election officials, he says, don’t allow him to use this to test their machines, something he takes to be evidence that “they know they’re bugged.”)

But paper balloting won’t really suffice for him, either. Frank made a lot of hay discounting paper balloting not done in person, saying without evidence that “ballot counterfeiting” and “ballot stuffing” was a “prevalent practice.”

As you might imagine, this doesn’t go over well with state elections officials of either party in 2022.

That includes Iowa Secretary of State Paul Pate, a Republican who has consistently said Iowa elections are fair and free of the kind of widespread fraud Frank claims, and whom Frank said refuses to meet with him. (“He just thinks I’m crazy,” Frank says of Pate. Pate’s office declined to specifically comment on Frank.)

Now branded as a “conspiracist,” Frank’s only hope is finding local residents (he calls them “supermoms”) willing to stir up trouble in their own backyards, trying to ferret out his phantom voters county by county.

The plan: Bother your neighbors and your election officials

If Frank managed to move people to his side with his “simple” math (that turned out to be quite complicated and obscure), those people will likely be looking toward Iowa groups that plan to do exactly the sort of canvassing he’s asking for.

Frank encouraged all of the above and more, and it’s possible some may take him up on it.

One post on Iowa Canvassing’s Telegram group, which had 80-some members as of last month, noted Frank stayed “until 11:30” answering questions.

If they do, now you’ll know why.

First in a series of stories debunking voter fraud accusations.

A previous version of this story incorrectly said the Center for Tech and Civic Life was started by Mark Zuckerberg. It was started in 2015 and Zuckerberg and his wife funded it in 2020.

Have a story idea for me? Email amie at iowastartingline.com. I’m also available by text, WhatsApp and Signal at (319) 239-0350, or find me on Twitter, TikTok, Instagram, and Facebook.