Last fall, people in the Des Moines suburbs started showing up at school board meetings to read, without any context, sexually-explicit passages from books they thought should be banned from school libraries.

Not coincidentally, this was happening all across America, and with the same handful of books—all of which focused on LGBTQ people’s or people of color’s experiences.

The Iowa debate exploded shortly after Virginia’s November election, where much was made of how a right-wing focus on fake Critical Race Theory curriculums played in the results. False claims pushed by the conservative media echo chamber helped fuel localized controversies, which in turn generated more media coverage and riled up the right’s base.

And now this week, the President of the Iowa Senate opened the new legislative session by declaring that teachers were implementing a “sinister agenda.” Gov. Kim Reynolds drew her loudest applause line in her Condition of the State speech by slamming the challenged books as vulgar and accusing school officials of indoctrination.

But while much of the political world has spent this time hand-wringing over the influence of far-right news and social media bubbles, our team of journalists at Iowa Starting Line have actually been trying to do something about it.

Would it surprise you to know that some of the best-performing Facebook posts about several Iowa school districts were actually about contextualizing the issue and lifting up the voices of students pushing back? That’s because they came from us.

We’ve seen some real, initial success in how we’ve covered these manufactured controversies, and it’s given us ideas of how to even better combat far-right disinformation in the future.

Here’s what we did and what we’ve learned.

Far too often, progressives are caught flat-footed when right-wing controversies go mainstream. Last year, motivated by how so much of the Jan. 6 insurrection was planned in public forums yet largely missed, we decided to keep a closer eye on the online chatter on the right.

In most situations, the rumblings of such efforts can be seen well ahead of time, if you’re paying attention.

Here’s what I wrote on October 26 in my social media chatter newsletter I send to a group of Iowa friends each morning:

“Controversy Alert: … The Waukee debate over three LGBTQ books at the library with sexually explicit passages seems like [a story] that could have legs … There’s plenty of obvious follow-up stories that could keep the controversy churning … Several Republican legislators (Wheeler, Boden, Chapman) have already posted about it on Facebook, with Chapman calling for a criminal investigation into the district.”

Sometimes folks on the left are hesitant to engage in a controversy pushed by the right out of fear they’ll give it more attention and inadvertently fuel the fire. That’s understandable, but if you watch closely enough, you can usually identify which story will blow up locally and which won’t.

This gives you time to prepare. That was particularly important in this case, since the targets were entire books. Our reporter Nikoel Hytrek obtained the three initially challenged books and read through each to prep stories that explained their full context.

Understand How Non-Activists Learn Of It

We often hear about the problems of conservative echo chambers, but liberal social media bubbles present their own problems as well (not storm-the-Capitol problems, but their own unique issues).

The book banning story started out in Iowa as a classic siloed information rollout, with folks on the left and the right being introduced to it in vastly different ways.

Those on the right largely discovered this story from three viral videos posted by The Iowa Standard, a far-right blog. The videos showed members of the public reading the explicit passages at board meetings, and the only context was that these books existed in public school libraries with explicit text or images. And, if that’s the only thing you knew, it could reasonably come off to some as shocking at first.

Those on the left likely first learned about the subject from an Axios Des Moines newsletter piece. It focused on how it was LGBTQ books that were targeted.

The Axios piece was certainly true in that the real underlying reason these books are challenged are because of who they are about, not what. But those Iowans who only learned of the issue from a minute-long excerpt from the videos were likely just taken aback by how explicit the book sounded—or more accurately, the only part of the book they know of now.

The point here is that if you’re going to write follow-up, contextual stories on the issue, it’s crucial to understand what people already know and don’t know about the issue. And understanding that means you need to find things outside your own personal social media bubbles.

Also, Axios is an opt-in newsletter, read by the more-informed. The viral videos on Facebook were each viewed over 100,000 times, popping up in the news feeds of both activists and the politically-disengaged.

The first stories we wrote were explainer pieces that laid out what the books were really about, how short those explicit passages are, and why they make sense in context. We also covered how students felt about the criticism, as well as the history behind book-banning efforts. We did three in all, including one in this new, conversational style that we’re trying out and really like.

Again, speed is of the essence here. Too often, mainstream news coverage of these “controversies” just give the broad overview of what both sides are saying, then maybe several days or a week later they do a more in-depth look. In that time, opinions can harden along basic partisan lines.

Something the far-right media does exceptionally well is pounding away at an issue over weeks and months at a time. While mainstream outlets may cover a piece of legislation or a local dispute once and then move on, the right produces a steady drumbeat of noise that almost demands attention regardless of its merits.

So, we did not let up on this subject either.

In November and December, we posted over 30 pieces of content on our Facebook page about the school book controversy, including a dozen graphics and two videos. Oftentimes, a single infographic or quote card can spread far further on Facebook than a 1,200-word story. 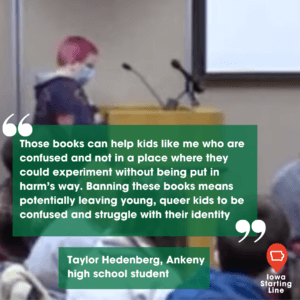 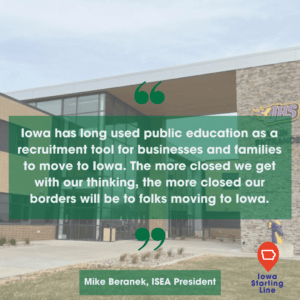 For our good explainer pieces, we found ways to constantly re-share them in different formats and kept driving traffic to them.

If you want your work to have a big enough impact, it needs to be free for anyone to read, which ours is.

The Des Moines Register did a really great, in-depth piece on the book banning subject, interviewing a wide range of people. But the Register is pay-walled. So the number of Iowans who could have read it is severely limited.

Because the right’s free content so easily spreads online beyond just the far-right circles, the stories debunking or contextualizing them need to be free as well.

When one side kicks off a “controversy,” they inevitably set the playing field for how the topic is discussed. In this case, far too many local TV news stories framed their reporting simply as “local parents upset at explicit books,” with little extra context.

But the broader—and one could say more important—issue here was the targeting of literature about LGBTQ people and people of color. And that has a real impact on whether those people feel accepted in their own community.

So, we did a novel thing and actually asked some students what they thought, then covered and uplifted the voices of those who spoke out at their school board meetings. Readers responded. Our piece on Ankeny students arguing for their right to read diverse books became our third-most engaged-with Facebook post of the year.

There’s something else very important about highlighting these voices: it provides hope.

A lot of Iowa politics news can be rather depressing to many people. So much so that it causes some to check out or give up on the state. It’s always a helpful reminder that there’s a lot of good people fighting back against some of the most extreme elements here, and those people represent Iowa too.

Amazingly, some mainstream outlets also failed to realize at the time one of the biggest aspects of this whole story: two Republican state senators calling for criminal prosecution of teachers over the books.

It is utterly wild that Sen. Brad Zaun’s first thought when a school district does something he doesn’t like is to start throwing teachers into jail. So, we reported on that for exactly what it was in pieces on Zaun and Sen. Jake Chapman.

Politicians should not be able to get away with couching threats like these as efforts to “protect children.” They both seem to have bought the far-right echo chamber’s absurd claim that these books were proof that teachers were trying to “groom” children. What Zaun and Chapman were really doing was stirring up controversy in local communities instead of simply trying to talk with the schools or learn more about the situation… you know, like a responsible legislator would.

Iowa Republicans have made it clear they will push this radical education agenda at the Statehouse this session, but that doesn’t mean it won’t be without consequences.

Did Our Work Influence the Conversation?

Iowa Starting Line refocused its efforts last year when we joined Courier Newsroom to develop a broader audience outside the politically engaged and to produce social-first news content designed to spread on Iowa social media. We’ve had some great initial success, including our coverage of the school books issue, and we see a real path to bringing local, credible, factual and contextual news to a large number of Iowans who primarily get their news via social media.

In analyzing Facebook data, we found that many of our stories and graphics on the individual school districts over the past three months were among the highest engaged-with Facebook posts among Iowa news outlets.

Of all the Facebook posts from news outlets published in Iowa from October to December about the Urbandale school district, ours were ranked first and second in engagements. For Ankeny, we had the third and fourth-most engaged-with posts. In Waukee, one of our stories was the fifth-most, and in Johnston a post of ours was the seventh-most engaged-with.

What does this all mean? It means that our coverage of the school districts were engaged with online more than every mainstream Iowa outlet’s coverage, save for KCCI and WHO-13 in a few instances. That’s significant, and a result of our intentional work to focus on informing Iowans where they actually spend their time and are influenced—too often, by disinformation spread by the right. However, those initial right-wing videos I mentioned did outperform us (and everyone else in Iowa on Facebook) by a large margin, so there’s still a lot of work to be done.

While no newsroom or organization may not be able to outright neutralize these far-right, online “controversies,” it is possible to dilute their reach and impact, and prevent them from taking over entire communities by distributing good, solid, local journalism on the same channels that can be read by everyone in response.

There are Iowans out there who may have stumbled upon those initial videos and been shocked but also thought, “Hmm, maybe this isn’t the full picture.” By quickly and easily providing better context in compelling stories that are formatted for easy online consumption and sharing, we can help more Iowans know the truth, and hopefully even prevent more folks from falling down the online rabbit holes of the far-right in the process.

If you see the benefit of this new approach, please support our work at Iowa Starting Line by making a contribution here.

5 Comments on "How We’re Fighting Back Against Far-Right, Online ‘Controversies’"