State Sen. Mariannette Miller-Meeks, a physician and Republican candidate for Congress, said in a tweet if she became infected with COVID-19, she would want to try a malaria drug for treatment that a new, large study shows has no benefit and may have worsened health outcomes.

In the March 22 tweet, which has since been deleted, Miller-Meeks said: “As an ophthalmologist, I take care of people frequently who are on hydroxychloroquine. It has a high safety profile and if I were seriously ill from COVID-19, having read the research, I would want to try hydroxychloroquine.” 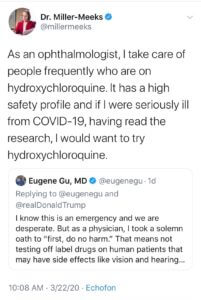 On March 21, President Donald Trump promoted the drug, calling it “a real chance to be one of the biggest game changers in the history of medicine.”

….be put in use IMMEDIATELY. PEOPLE ARE DYING, MOVE FAST, and GOD BLESS EVERYONE! @US_FDA @SteveFDA @CDCgov @DHSgov

A new study of the drug’s impact on coronavirus patients showed no benefit and potentially did more harm than good when used on 368 men at Veterans Health Administration medical centers across the country.

The 27-page study, reported on Tuesday by the Associated Press, found about 28% of VA patients given the drug in addition to routine treatment for COVID-19 died compared to 11% who were treated without the drug.

According to the AP: “The nationwide study was not a rigorous experiment. But with 368 patients, it’s the largest look so far of hydroxychloroquine with or without the antibiotic azithromycin for COVID-19, which has killed more than 171,000 people as of Tuesday.”

As press reports have repeatedly pointed out, hydroxychloroquine has not been proven to treat COVID-19 “in any significant clinical trials.”

NPR reported Tuesday that a panel of experts convened by the National Institute of Allergy and Infectious Diseases — the institute led by Dr. Anthony Fauci — recommends against the combination of hydroxychloroquine and an antibiotic to treat COVID-19 because one of the potential side effects is sudden cardiac death.

Also this week, Politico noted how President Trump, his political allies and conservative TV personalities “have subtly scaled down their hyping of hydroxychloroquine.”

The article says Trump hasn’t publicly touted the drug since his daily press conference last Thursday when he announced his administration had released about 28 million doses of the drug from the federal government’s national stockpile.

Miller-Meeks, an Ottumwa ophthalmologist, previously served as director of the Iowa Department of Public Health and has emphasized her credentials as a doctor in her campaign to represent the 2nd Congressional District in Southeast Iowa.

Her embrace of Trump’s position on the malaria drug as a potential treatment for COVID-19 is unsurprising given how she is marketing herself as “The Conservative, Pro-Trump Candidate For Congress.”

I am running for Congress because the people of Iowa deserve someone who will never quit fighting for them, their future and the future of their American dream. #ia02 pic.twitter.com/gJl7aizvCA