Bobby Schilling, a former congressman from Illinois, wants to return to the U.S. House of Representatives as a newly minted Iowan.

But to get there, he faces two obstacles: Republican state Sen. Mariannette Miller-Meeks, and, if he wins the primary, Democrat Rita Hart.

At a Fort Madison diner Thursday morning, Schilling wanted the small group of voters to know his conservative bonafides — “I’m a huge Second Amendment guy … but I’m also very pro-life” — while also pointing to elements of his professional background he believes will appeal to independents.

“I think the big difference in this primary and then into this general election is, who can attract the independents?” Schilling said, noting his “union background” from working at a corrugated box plant and later at Prudential. “I can attract — I call them the Reagan Democrats — the people that hunt, fish, they go to church on Sunday. They don’t like the direction that their party is heading, and they want somebody that just has some common sense and is willing to truly represent them.”

Schilling said he became “a solid, fiscal conservative” and “really, really solid Republican” when he opened a small business and “had to deal with the government.”

As a representative for Illinois’ 17th Congressional District, which he served from 2011 to 2013, Schilling said in his first year he “rejected” the congressional pension program, health insurance, returned $110,000 of his budget and slept in his office to save money.

“I go with what they call a ‘servant’s heart,'” Schilling, of Le Claire, said. “I believe that it’s not my seat, it’s the people’s seat, and the best ideas that I come up with actually come from the people of the district.”

Democratic Rep. Dave Loebsack, who has represented the district since 2007, is retiring at the end of the year. To flip the seat blue, Loebsack ousted longtime Republican Rep. Jim Leach under a different 2nd District map, who held the seat for 30 years.

Donald Trump won the 2nd District by four percentage points, a marked shift for a district that supported Democratic presidential candidates at least as far back as the 2000 election. 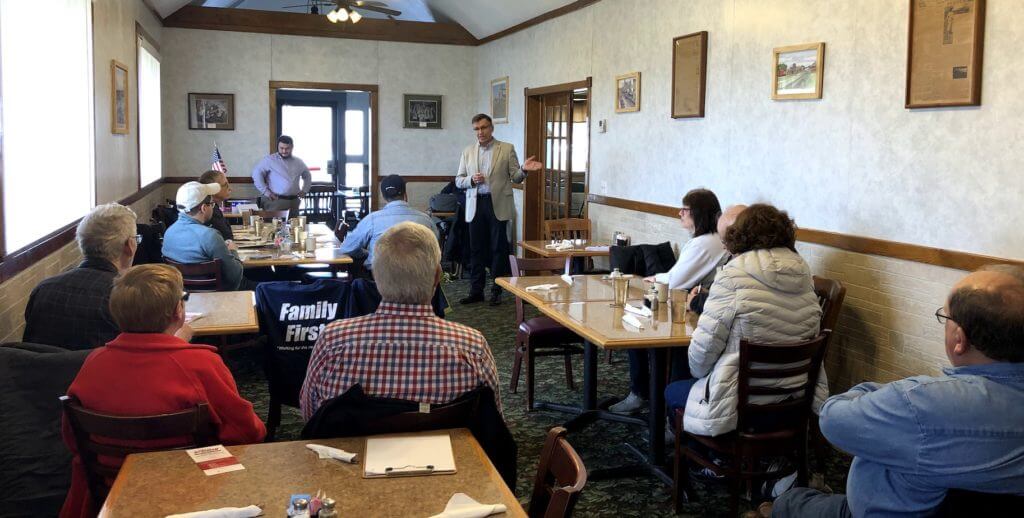 In Lee County — Schilling also visited Keokuk today — the candidate made his allegiance to the president known.

“Republicans don’t like some of the stuff I have to say,” Schilling said, calling some of the nation’s defense spending “nuts.” “But if the Republicans are spending too much money and doing stuff wrong, I’m calling it out.

“This is about our country. Do I think Trump’s doing an awesome job? Yes, I do. I think he’s going to go down in history as one of the, if the not the best president in the United States history,” he said. “I know that sounds crazy, but the thing with Trump is he’s kept every single promise he has made.”

Despite Schilling’s congressional experience, Miller-Meeks currently is outpacing him in the primary in terms of fundraising and endorsements.

To separate himself, Schilling is not afraid to call-out his fellow Republican for her past campaign performances and what he believes is an insufficiently pro-life record.

“My main opponent in this race has run three times and not one of those times has she ever been endorsed by the National Right to Life or the Susan B. Anthony List,” Schilling said. “As a matter of fact, in 2008, she was put on the Iowa Right to Life’s ‘pretender’ list.”

In addition to his anti-abortion beliefs, Schilling also told the Fort Madison group he was opposed to a $15 minimum wage, wants to remove American troops from Afghanistan, “go after the runaway entitlement programs” and reduce the national debt.

When asked at the end of the meeting what he meant by “entitlement programs,” Schilling clarified that he did not consider Social Security an entitlement program, but believed “some adjustments” needed to be made to the retirement fund and Medicare.

In a final pitch to the voters who will decide between Miller-Meeks and Schilling in the June primaries, Schilling supporter Bruce Floyd highlighted his experience in Congress.

“Bobby Schilling will not have to go to Congress and have this steep learning curve, which he describes personally as trying to drink out of a firehose that’s opened wide,” said Floyd, a 70-year-old campaign volunteer from Delmar, in Clinton County. “He doesn’t have to do that. He knows it, he’s been there, he’s done that.”