Sometimes when an article on Senator Chuck Grassley’s legacy is written, you’ll see the old photo of him on the left from 1959. That’s from when Grassley was all of 25 years old, entering the Iowa House for his first of eight terms before getting elected to the U.S. House and later the U.S. Senate. Sixty years later, of course, he’s still in office, often in the center of whatever major legislative or judicial confirmation battle is happening in Washington, D.C.

Perhaps when future stories are written about his grandson, Pat Grassley, we’ll see the photo on the right, of when he was selected Speaker of the Iowa House — today. Or maybe the one below, when Grassley the Younger entered the Iowa House after winning his first race at age 22, for a rural district that covered Butler and parts of Bremer counties in north-central Iowa. 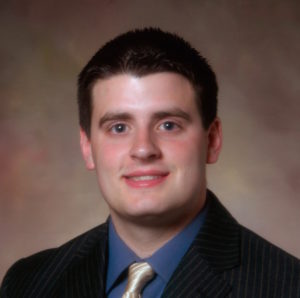 Since then, it’s been a steady rise for Grassley. He served as the powerful Appropriations Chair this past session before being named as Speaker by his Republican colleagues today. He will officially take over the new role at the start of next year’s legislative session.

There was talk that Senator Grassley worked the phones to whip votes for his grandson, though Pat Grassley told reporters today he discouraged his grandfather from doing so.

It wouldn’t have been the first time that Chuck tried to promote Pat into a bigger role. In 2017, Senator Grassley endorsed Representative Grassley to replace outgoing Iowa Secretary of Agriculture Bill Northey in the 2018 elections — before the younger Grassley even announced (he ended up deciding not to run).

Within minutes of Speaker-elect Grassley’s victory today, Senator Grassley put out a statement celebrating the news.

“I’ve watched my grandson Pat mature as a freshman legislator at age 23 to become a very effective leader in the Iowa House,” Senator Grassley said. “I attribute the mentorship of Speaker Linda Upmeyer for serving as a tremendous role model to Pat and the entire Republican caucus. Notably, Pat became chairman of the Appropriations Committee after just nine years. He likes to remind me that it took fifteen years for me to earn that gavel.”

The real prize that many in Iowa politics believe that Chuck is setting Pat up for is his own Senate seat. With his current term ending in 2022, no one expects the 86-year-old Grassley to make one more run for an eight term. That would create a critical open seat in a purple state, one that Republicans will be eager to fill with a top-tier recruit — what better than the popular incumbent’s grandson?

Pat Grassley would obviously start out with an enormous family name advantage even if he hadn’t been elected as Speaker, especially in a state that loves long-serving incumbents and family lineages (Terry Branstad, Robert Ray, Tom Harkin, the Culvers, etc.). Now, he’ll have at least a year of gracing statewide headlines during the legislative sessions as Speaker to burnish his leadership credentials to Iowa voters.

Were he to run and win in 2022 (no sure bet — Democrats have several strong potential contenders), that would put Grassley in the U.S. Senate a few months shy of his 40th birthday. So, he would pick up from his grandfather’s 42-year tenure with plenty of years of potential service on his own horizon. It’s entirely possible Iowa could have a Grassley in U.S. Senate for 80 years running.

But that assumes Pat Grassley only wants to use the Speakership as a one or two-year stepping stone to get to D.C., which, again, he could probably accomplish with or without the extra notoriety. Such a quick turnaround could come off as much too opportunistic, too perfectly-timed that it would appear to voters as more like a family obsession with power than a commitment to service.

There’s also the danger that Republicans lose the Iowa House in 2020 under Grassley. Democrats need to flip just four districts, a very achievable task given their strong candidate recruitment.

That would not speak well of Grassley’s leadership, were he to lose the Republican majority as soon as he’s handed it.

Regardless of what the new Speaker-elect ends up deciding to do with his career, Iowa will be stuck with Grassleys in prominent positions of political power for the foreseeable future, a continuation of the state’s odd obsession with an almost-monarchical approach to selecting their leaders.

If nothing else, it’s a boring way to live, much less run a state’s politics.