In the middle of today’s stunning news of indictments and guilty pleas in Robert Mueller’s investigation into Russian election collusion, a familiar name popped up this afternoon that Iowa politicos know all too well: Sam Clovis.

The former conservative radio talk show host and Morningside College professor has been identified by Yahoo News as the “Campaign Supervisor” in George Papadopoulos’ guilty statement, which extensively highlights the Donald Trump campaign’s internal discussions and actions on Russia (read it all here). Given what the Campaign Supervisor is listed as doing in the document, Clovis could be in very serious legal trouble – and he may take down a large part of Trump world with him. [Update: Clovis’ attorney has confirmed that he is the Campaign Supervisor mentioned in the document.]

The guilty statement released today shortly after the Paul Manafort and Rick Gates indictments detail how Papadopoulos was approached by Russian contacts, tried to set up meetings with them and campaign officials, and later lied to the FBI about it. Throughout the document, the Campaign Supervisor (reportedly Clovis) often comes off as the most supportive person in the campaign of Papadopoulos’ efforts.

Papadopoulos was brought onto the Trump campaign in March of 2016 to serve as a foreign policy adviser (even though his credentials in that field were somewhat suspect). His early meeting with the Campaign Supervisor on March 6 made clear that improving U.S.-Russia relations was a “principal foreign policy focus of the Campaign.”

That doesn’t prove any sort of collusion on the part of the Campaign Supervisor, but it does indicate that this person was very pro-Russia from the outset, before Manafort joined the campaign in late March.

Papadopoulos met with Russian contacts on March 24, during which they urged high-level meetings between the Trump campaign and Russian officials. The Campaign Supervisor praised Papadopoulos’ efforts as “great work” and said he’d run it up the chain of command. 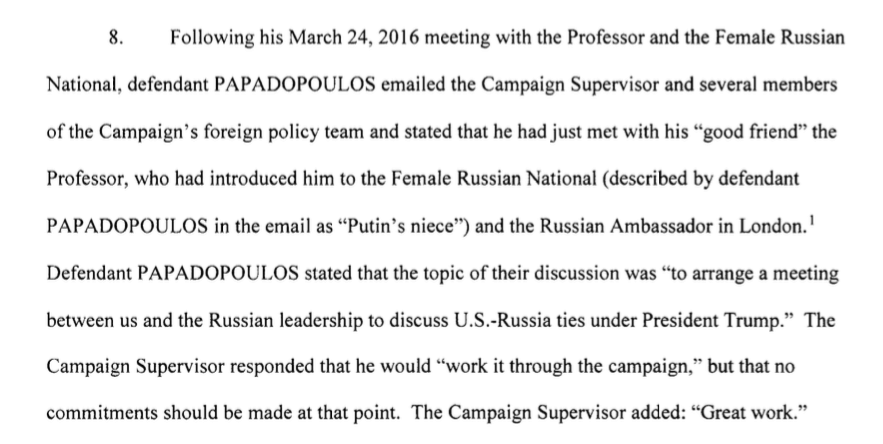 During another meeting with his Russian contacts in late April, Papadopoulos learned that the Russians had “dirt” on Hillary Clinton, including “thousands of emails.” At this point, talk moves on to potential “cooperation,” and on May 4 Papadopoulos forwarded on an email he got from another Russian contact, this one with connections to Russia’s Foreign Ministry, suggesting some sort of partnership. Papadopoulos questions the High-Ranking Campaign Official (which Yahoo News names as Manafort) on how to proceed, and then has a call with the Campaign Supervisor the next day about it. He then forwards the Russian email to the Campaign Supervisor.

The guilty statement refers to this May 4 email several times, and appears to be a key piece of evidence in Mueller’s investigation. Clovis is reportedly right in the middle of that.

Several weeks later, Papadopoulos follows up his inquiries and is rerouted to the Campaign Supervisor again, who is listed as “running point” for Russian interaction.

Interestingly, the document does not include what the Campaign Supervisor’s response was or if there was none. Immediately after it, however, it is explained that Papadopoulos continued his interactions with the Russians from mid-June to mid-August. June 9 was the date of the infamous meeting at Trump Tower that included Manafort, Donald Trump, Jr., Jared Kushner and a Russian contact who was offering up damaging information on Clinton.

Mueller appears to have plenty of information on those later interactions, but only lists one of them. That one involves Papadopoulos telling the High-Ranking Campaign Official that the Russians want to set up a meeting in Russia, and suggests that he could go if Trump himself cannot. The Campaign Supervisor encourages Papadopouls to make the trip, but it never happens. 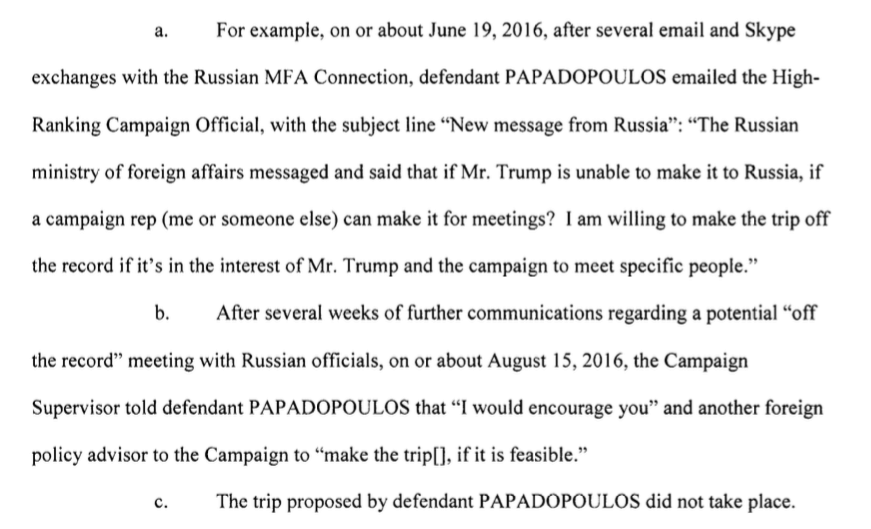 Even with the Manafort and Gates indictments today, it’s not entirely clear how deep into the Trump campaign Mueller’s investigation will strike, or whether it will seek charges against people specifically for collusion with Russia. Papadopoulos pled guilty to making false statements about his contacts with Russians, not any offenses regarding the contacts themselves. However, the document also makes it seem clear that Papadopoulos, after being arrested, agreed to work with Mueller. He might have originally faced even more serious charges that he traded his cooperation for in order to have them dropped.

Regardless, Clovis could be poised to be at the center of the further investigation if he really is the “Campaign Supervisor,” especially if he truly was the point person on Russian outreach. Yahoo News reported that a Trump campaign official identified Clovis as that person, and there’s been times in the past where Trump operatives have manipulated the press to settle internal scores on rival Trump factions. However, Papadopoulos, a young foreign policy aide brought on by the Trump campaign in March, would have almost certainly worked under Clovis, the campaign co-chair who coordinated foreign policy work.

Other reports have suggested that early on in the campaign, Papadopoulos’ Russia meeting requests were either rejected or downplayed by top campaign officials. Obviously, something changed considering the June meeting we know happened at Trump Tower. That’s still one of the biggest remaining mysteries in the Mueller investigation – how that meeting was decided on. And with the Papadopoulos plea explaining that he continued his contacts with Russians through August of 2016, the campaign seemed to be more open to that avenue later in the election.

And even without Clovis’ reported involvement in this specific part of the Russian saga, his recruitment of Carter Page to the campaign with little vetting has already caused enormous problems. Page, another foreign policy aide, is being investigated by the FBI as an agent of the Kremlin.

One thing is for sure: Clovis’ chances of getting approved to the USDA’s top scientist spot (already highly controversial in its own right) just dropped to nearly zero. Senate Republicans aren’t going to want to further stoke the Russian controversy by allowing Democrats to ask Clovis questions about it during a confirmation hearing.