Hawaii Congresswoman Tulsi Gabbard keynoted Democratic barbecues this Sunday in Ames and Iowa City, hitting themes of party unity, love and anti-war in well-received speeches. Gabbard has visited Iowa before for local party events in 2015 and 2016, but has not come to the caucus state nearly as often as other well-known Democrats and rising stars have. She noted that her trip this weekend was thanks to a “very patient and persistent” former Bernie Sanders activist that invited her to the Ames event.

Gabbard began her speech with describing the “Aloha spirit” and how its idea of interconnectedness applies to political action today. She related that to a need to end the nastiness in political discourse, especially in the age of Donald Trump.

“When we see so much suffering and anger and ugliness and bigotry and divisiveness, sometimes the easier answer can be to point fingers or come back with anger,” Gabbard told the crowd of several hundred Democrats in Ames. “But now is the time to challenge ourselves to say, how can we, both as individuals and a group, be part of the solution?”

She wasn’t just talking about anger directed at Trump and Republicans, however. Gabbard made a point to encourage Democrats to cool down the intra-party warfare that still wages on from the 2016 presidential primary.

“First and foremost, it’s important that we stop attacking each other,” she said. “We stop the hyper-partisanship, we stop the in-fighting within our own family, pitting one faction of the party against another, and actually focus all of our energy on service to the people. We’re going to have different ways on how to get there … We may be very passionate and committed to our own ideas, but the point is we can disagree on the how-to as long as we are centered and focused on that mission of service.”

Gabbard was one of Bernie Sanders’ most prominent endorsers during the Democratic presidential primary, gaining her many fans around the country. And she emphasized on Sunday many of the policies that Sanders often spoke about, including reinstating the Glass-Steagall Act, regulating Wall Street banks, criticizing private prisons, fixing the opioid crisis and combatting big pharmaceutical companies in the healthcare debate. 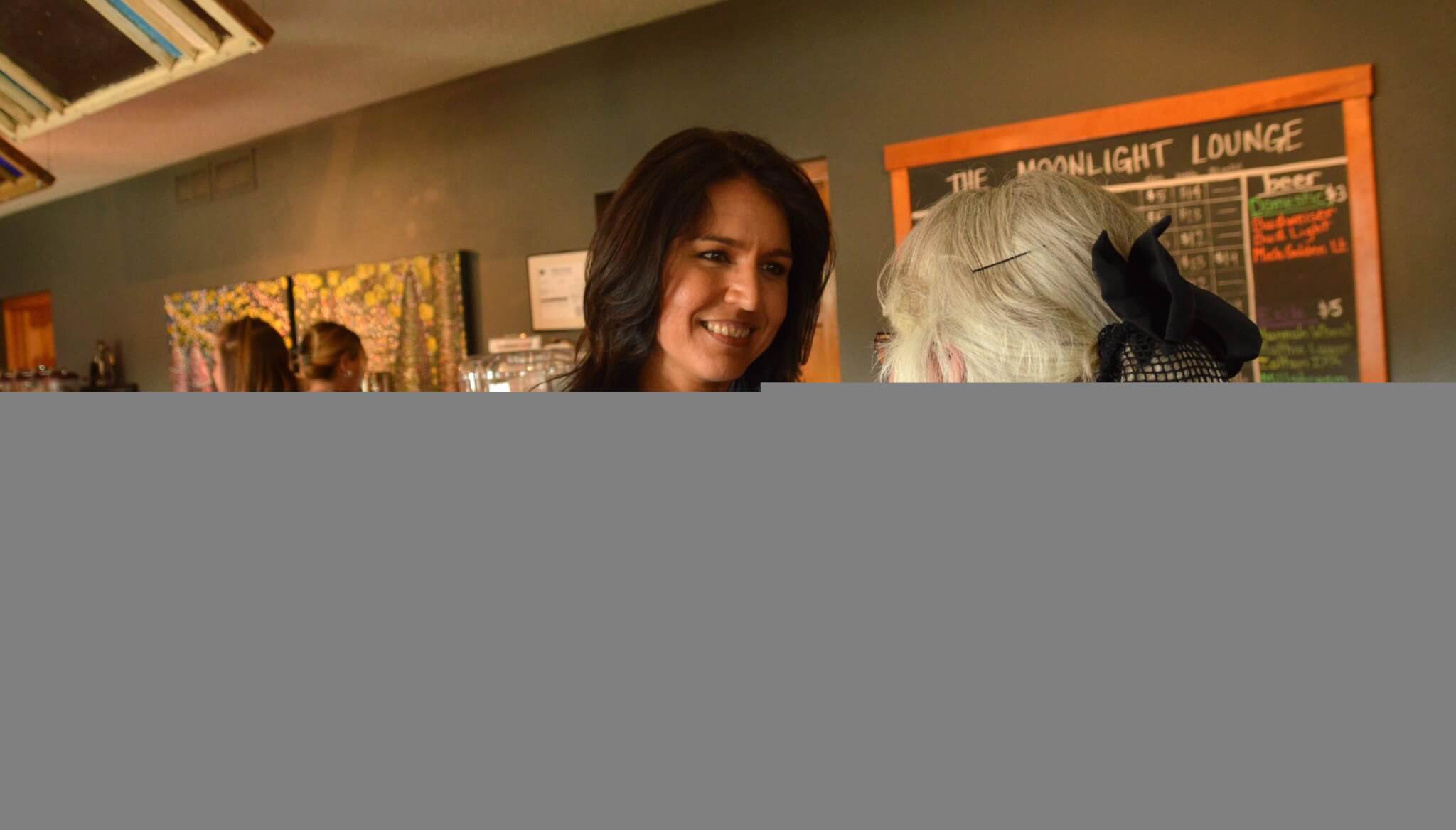 “Rather than tweaking around the edges, trying to fix a broken system at its core, we need to pass Medicare-for-all,” Gabbard said to a loud round of applause. “And we need to go a step further. We need to make sure Medicare can actually negotiate prices down with these prescription drugs.”

But Gabbard also has her fair share of detractors in the party, including activists on all sides of the party’s ideological spectrum. Her past stances on gay marriage and Islam have garnered suspicion over her progressive credentials, and many questioned her judgement when she met with Syrian dictator Bashar al-Assad. That dissent, however, wasn’t evident in the room full of Central Iowa Democrats as Gabbard got two standing ovations and the most positive reception of the day’s speakers, which included all the gubernatorial candidates, 4th Congressional District contenders and 2020 presidential candidate Congressman John Delaney.

The Ames and Iowa City events were part of a multi-day Iowa trip for Gabbard, who also met with medical cannabis activists in Des Moines. She related to the crowd her conversation with the parents of an epileptic child that were advocating for cannabis oil legalization. Gabbard called for descheduling marijuana from the list of federal controlled substances.

“It’s a critical step as we talk about reforming our criminal justice system and ending a failed war on drugs, a war that incarcerates people for the use of quote-unquote illegal drugs while these prescription drug dealers of so-called legal drugs make billions of dollars of profit,” she said. 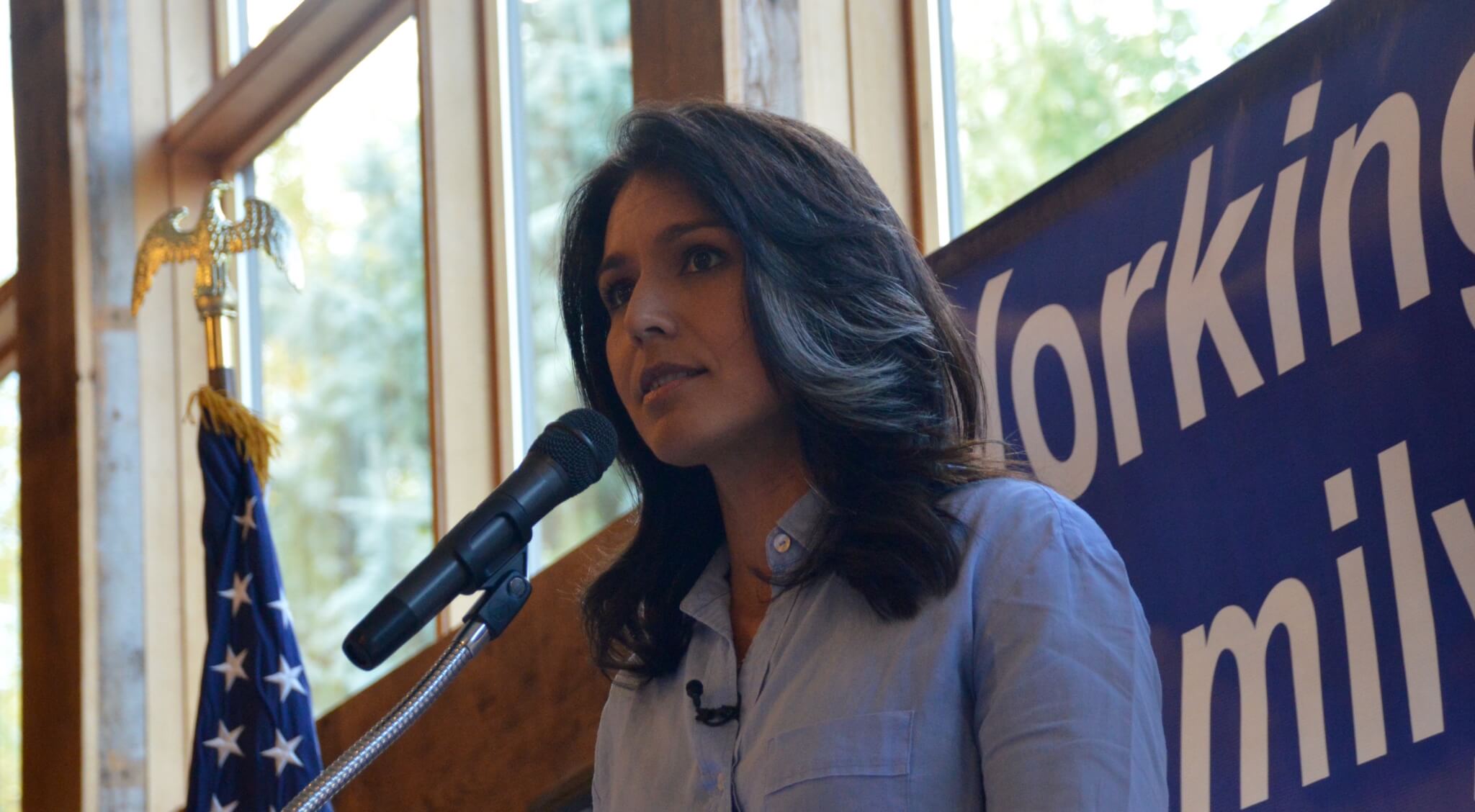 The rest of Gabbard’s speech focused on war and peace, an area where she’s stood out in the Democratic Party.

“It’s important that we remember who pays the price in these wars,” she noted, telling a story about her time in Iraq with the Hawaii National Guard where she would check the casualty list each morning to see if any Hawaiians had been killed or injured.

She also reminded the audience that every one of them were paying a price for “interventionist, regime-change wars,” whether or not they were in the military service, arguing that America can’t pay both for wars and needed domestic programs.

On the topic of North Korea, Gabbard described how American intervention with Saddam Hussein and Muammar Gaddafi helped lead to the Kim Jong Un’s resistance on his own nuclear weapons.

“North Korea gets the message loud and clear: the United States is not going to stand by its agreements,” Gabbard said of Trump’s actions to move the country out of the Iran deal. “And to avoid being toppled, North Korea [thinks they] should probably hold on tightly to their nuclear weapons … North Korea’s nuclear weapons pose an existential crisis to my constituents in Hawaii. I’ve been pushing strongly for the Trump Administration to engage directly in serious diplomatic negotiations with North Korea. There is still, maybe it’s a slight chance, but there is a chance to resolve this crisis without launching a war that could escalate greatly and devastate.”

Gabbard closed out her 20-minute speech in Ames by imploring Democrats to heed her Aloha message and conduct their political activism with a mind focused on love.

“Some people mistake it for a weakness, that somehow workers who fight for change, that you can’t be strong unless you are angry and filled with hate and fired up,” Gabbard noted. “Martin Luther King said that darkness cannot drive out darkness, only light can do that. Hate cannot drive out hate, only love can do that … This love and Aloha that we have in each of our hearts can open our eyes to the truth that every hungry child is my child … That an attack on anyone because of the color of their skin, because of where they come from, how they worship god or who they love is an attack on each and every one.” 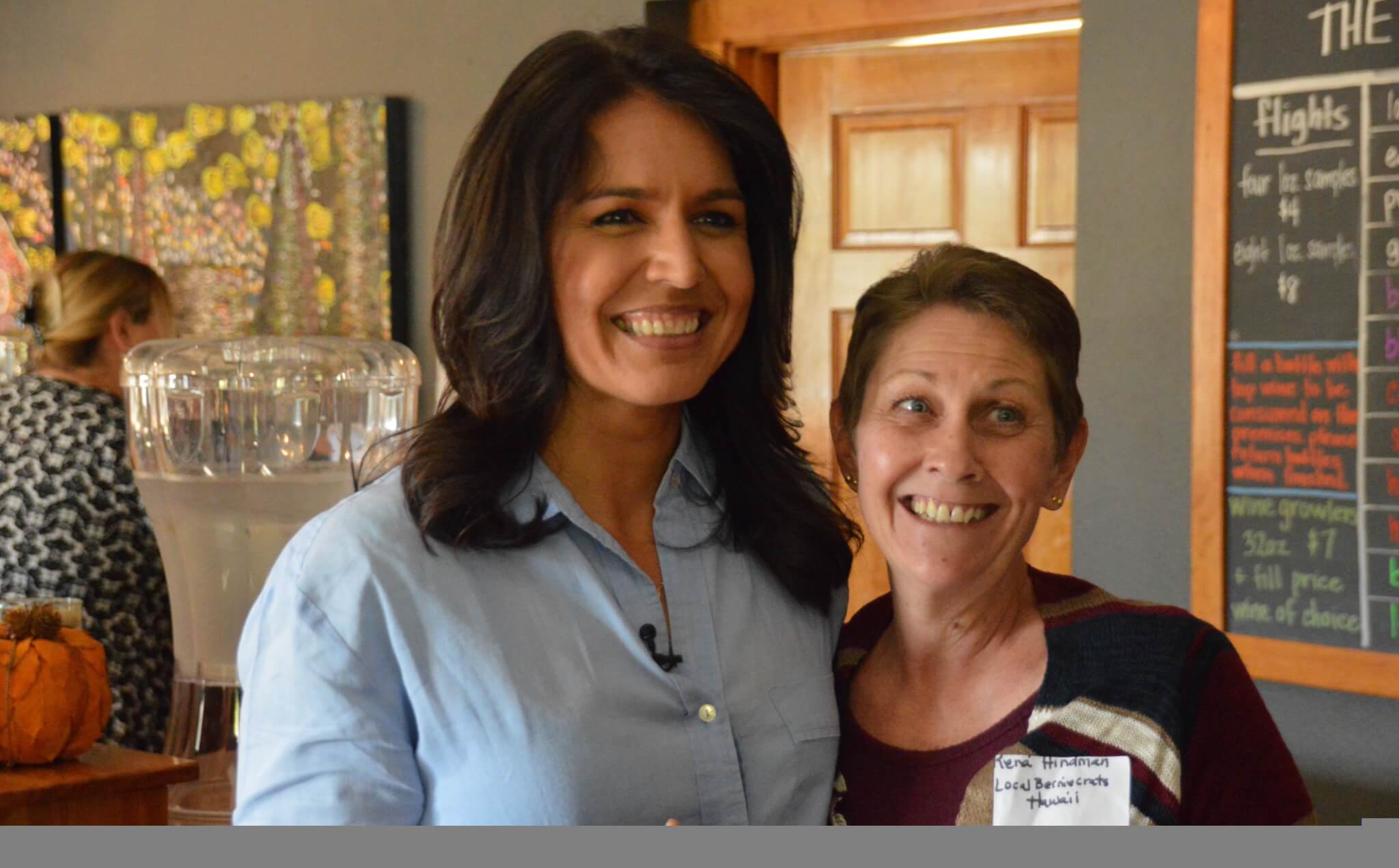 That framing in particular offered up an interesting contrast to the style of the man she endorsed (who she resigned her DNC vice chair post for) from the 2016 primary. Rather than tick off statistic and study in rapid succession like Sanders often did on the stump, Gabbard wove in personal stories from her own life and her state to make her points. And her delivery was a much more understated, compassionate-sounding one than used by the loud and boisterous Vermont senator. Both approaches seem to work, as the crowd in Ames enjoyed her speech and well-wishers lined up afterward to get selfies with Gabbard.