Hi! My name is Dallas, nice to meet you! A couple weeks from now, I’ll be graduating with a degree in politics from Loras College and have little to no idea what my future looks like. The 2016 election results shocked me as an Iowa Democrat, and I’ve been incredibly frustrated watching what’s transpired ever since, which is why I welcome you to the first edition of my column: Moving Forward. While we may have lost the battle in November, we can still win the war, so return here every two weeks for ideas on we can Move Forward as a party. However, before progress toward victory can be made, we have to first pick ourselves up off the ground and shake off the loss. 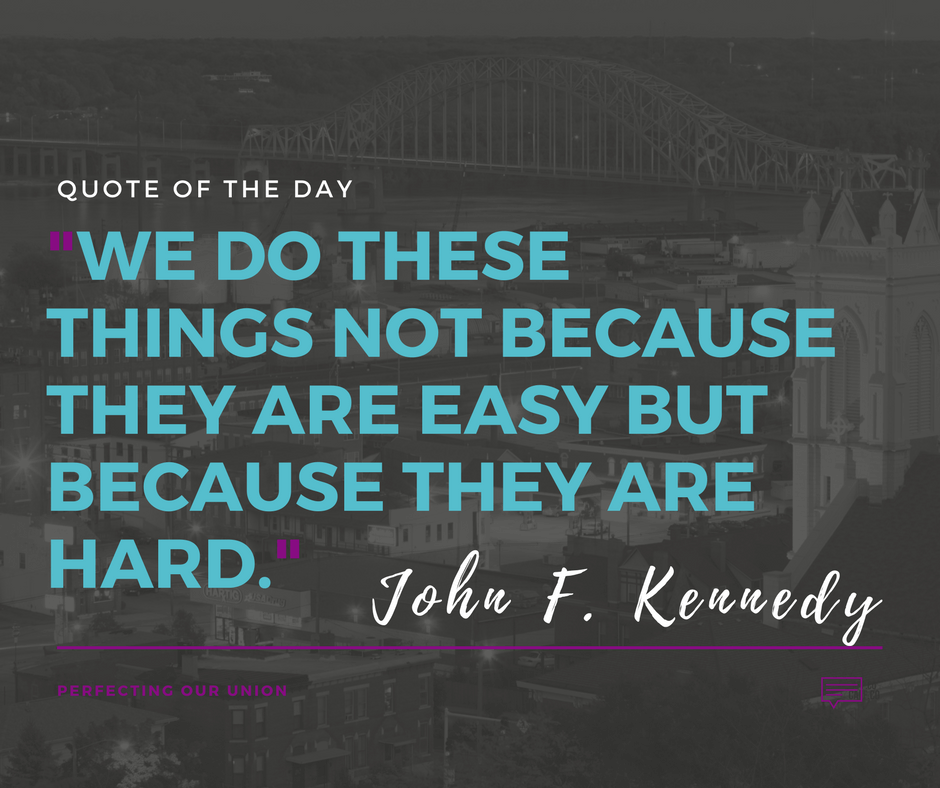 Pretty bad, honestly. Iowa Republicans control three out of four Congressional seats, Governor, both Senators, and majorities in both chambers of the legislature–plus Trump won Iowa by a wider margin than he did Texas. What makes matters worse are the rampant divisions throughout our ranks. Even now, Hillary pops up for an interview where she gets quoted for [whatever gets clicks], and then the 2016 Democratic primaries are litigated all over again. A lot of it is noise, people will always be upset about *something* on the internet, but the notion of constant in-fighting is still worthy of our concern.

Questions were asked of the party that have gone without answer. Thus, we’ve allowed uncertainty to creep into people’s minds, causing doubt to take root where none existed before. The population’s discomfort to vote Democrat has calcified into distrust; Iowans no longer trust us, Midwesterners no longer trust us. Our position isn’t unique, because the same trends are happening across the Midwest. Our problem might be that the Democratic Party claims the mantle of being the people’s party—but the people sure don’t see it that way. Our mandate with the people has been lost, for they no longer see reason to vote D.

In light of the circumstances, we must return the people to the party and the party to the people in order for Iowa’s Democratic Party to live on and fight another day. Our situation is dire yet there is still a chance for survival. Our first order of business should be to turn to the people so that we can learn from the mistakes of the past, because ignoring a problem is no kind of solution at all.

There was once a time when Democrats could rely upon union halls as a means for not only fundraising but as a reliable source for votes and volunteers, too. Since the increased labor restrictions, Democrats are forced to look for money from professional and corporate interests, a network of operatives their new source for campaign labor. The party’s policies seemingly followed suit, and the people took notice.

Moving Forward, why not rekindle our efforts to expand the presence of unions, however and wherever we can? Or maybe find ways that we can replace the community and comradery of union halls–the epicenter of labor’s political power.

Unions and union halls brought people in communities all across Iowa together. By uniting under one banner, with a common cause, unions taught people that we could achieve far more when we work as one rather than only one. Even the most high-minded and lofty of ideas, such as economic justice, are attainable when the many hands of the people are engaged in the endeavor. Collective passion quickly becomes collective action, which becomes politically influential when done with purpose and direction. Thus, why unions and Democrats made such a great pair!

Down but not out, it’s time that we regroup and renew our commitments to the cause. We must remember for who we fight, and engage the people whose lives we work to better, because we need all the help we can get in order to win next year’s electoral bout. The people may have spoken, but their concerns have yet gone unheard, which is why it’s time that we listen to the people and learn from what they have to say–then acting on what we learned so they can trust we’ve listened at all!

Moving forward, we must return the party to the people and the people to the party, because we need a mandate from the people for us to win next November.