In the 2016 presidential elections, Iowa shifted away from Democrats more than any other swing state in the country, realizing a total margin shift of 15.2%. This shift yielded large losses for Democrats down the ballot as well – Democrats in Iowa’s 1st District, 3rd District, and state legislative races across the state failed to secure victories. Interestingly, Dave Loebsack of Iowa’s 2nd District managed to defy odds and secure a win despite his district voting for Donald Trump by 4 points, a margin wider than both Iowa’s 1st and 3rd Districts.

Loebsack performed so well, he averaged an 11-point difference in votes than Hillary did, winning his district handily by approximately 7 points. What drove the split-ticket voting that resulted in Dave’s win? According to the data, Dave overperformed in rural, small-town communities. In Davis County, a small county with a population of just under 9,000, Loebsack outperformed Hillary by a staggering 41 points. He saw similar margins over Clinton in Monroe (36%) and Van Buren (31%) Counties as well. Interestingly, Loebsack performed worse than Hillary did in Johnson County, a liberal stronghold and home to his opponent, Dr. Chris Peters. Loebsack’s underperformance in Johnson County may largely be attributable to the fact that Johnson didn’t experience the same Obama/Trump flip that the rest of the counties experienced. Similarly, Loebsack didn’t perform exceptionally well in Scott county, outperforming Hillary by only 5 points.

Using multiple linear regression, I developed a model to control for variables (specifically, unemployment, age, ethnicity, education, incomes and employment in manufacturing) that would determine who split ticket voted by county. The strongest and only statistically significant variable in my analysis determined that the voters who split their ticket Trump/Loebsack had lower household incomes than those who voted down the line. From my model, counties observed a .93% decreased in Loebsack’s overperformance for every additional $1,000 in median family income.

(You can download the full multiple regression spreadsheet here) 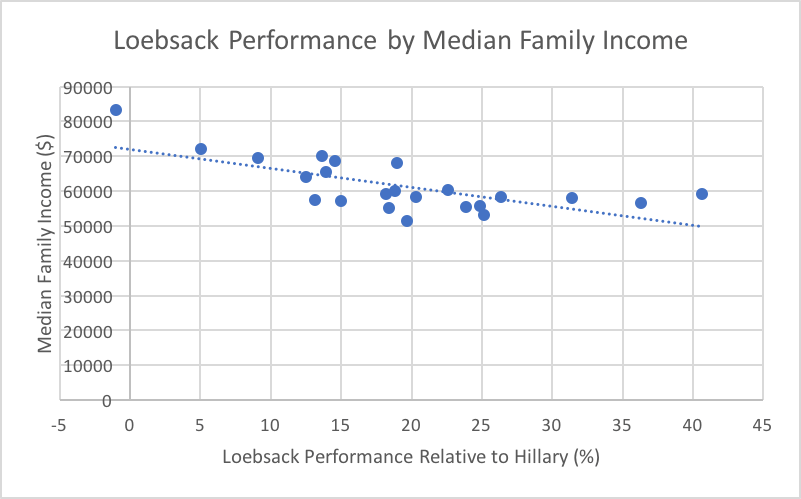 Incumbency may also be a contributing factor as to why we didn’t see this split-ticket phenomenon in rural communities across the state. Iowa’s third district only voted for Donald Trump at a margin of 3.5%, but Dave Young (who the DCCC had sought to oust in 2016) managed to win by 15 points. Dave Young, then, outperformed his party’s respective presidential candidates by a similar margin Dave Loebsack did, at approximately 11 points.

Rod Blum also outperformed relative to Donald in Iowa’s first district, securing his second term in the House. Blum, however, overperformed by much smaller margins than Young and Loebsack, by approximately 4 points.

Ultimately, a combination of incumbency and strength in the rural south handed Loebsack his victory and maintained his position as the only Democrat in Iowa’s congressional delegation. Having a voting record helps, but maintaining a message consistent with the struggles of rural Iowans was a  fundamental component in holding on to his seat. Going in to 2018, Democrats would do well to follow Loebsack’s footsteps to make ground in the legislature and congress. 7 Comments on "How Dave Loebsack Beat The Trump Bump"