Hillary Clinton visits Iowa today, the day that early voting begins in the state. Her rally is at a plaza in downtown Des Moines that’s just a stone’s throw away from the Polk County Auditor’s office, where in-person early voting is held from now to the election. The Clinton campaign hasn’t announced more details yet, but it’s a safe bet to make that she will lead a march of Democrats two blocks down the street to vote, or at least send them on their way.

Why is this stop in Des Moines so important for Clinton? Because Democrats only win in Iowa if they get a large portion of their supporters to vote early, and right now the numbers don’t look too good.

For decades, Iowa Democrats have made good use of Iowa’s very liberal voting laws, which makes it exceptionally easy to cast a vote. No voter I.D. Same-day registration. No-excuse absentee balloting, which means anyone can cast a ballot by mail from home for any reason. An easy satellite voting petition process so you can set up polling places on college campuses weeks ahead of Election Day. Volunteers can literally collect ballots from people at their homes and deliver it to election offices.

This has made it easier for Democrats to turn out their voters who are less-likely to vote by expanding the options for them to cast a ballot. Republicans have lagged behind Democrats’ efforts for years, but are catching up with a much more focused approach. Their voting base doesn’t require it as much, but it’s still extremely useful to get your votes in early.

Let’s look through each of the key factors in Iowa’s early vote, including the basic details of voting options, where things stand now, and the strategies that campaigns employ.

The most commonly used method, voters can request an absentee ballot by mail by filling out an absentee ballot request form and sending it in to their Auditor’s office. You do not need an excuse to vote this way, and a campaign volunteer can deliver your request and collect your ballot. Both parties send out absentee mailers with pre-filled forms to their targeted voters. County Auditors start sending out the absentee ballot 40 days out from the election, when early voting begins (some do it a few days before).

The parties use this method to get many of their less-likely voters to cast a ballot, though it takes a lot of campaign resources to accomplish.

Every Auditor’s office has in-person voting from today through the election during weekday business hours. Many are also open the two Saturdays before the election. This option typically draws your more-engaged voter who wants to get their vote done with early. Democrats are making a big show of voting at Auditor’s offices today to encourage early voting.

Campaigns can request that satellite voting locations be established at sites in a county on a certain day. Democrats utilize this option far more than Republicans, setting them up at places close to their voting base, like at college campuses and community centers or grocery stores in low-income areas. This method is largely targeted to less-likely voters. Campaigns heavily advertise and organize for these locations.

Iowans can register on the same day that they vote, with the exception of several days just before Election Day. This obviously makes it much easier when you’re turning out people to early voting locations.

As of Thursday morning, Democrats have more than twice as many absentee ballots requested than Republicans. However, Democrats also lag far behind the number of absentees requested at this point in 2012, while Republicans are slightly ahead of their past performance. It’s not enough for Democrats to simply beat Republicans on the early vote, they need to do it by a wide margin.

Those totals have many Democratic activists and down-ballot candidates very worried. It’s to be expected that Democrats won’t achieve 2012-like numbers (nor do they need to), when Barack Obama beat Mitt Romney in Iowa by six points, but they’re currently even behind their 2014 numbers. Activists and insiders are wondering if it’s due to low Democratic voter enthusiasm, bad strategy, or both. Still, the party insists the lower early vote numbers are part of a new strategy they have faith in this year.

One of the big numbers Democrats are focused on that doesn’t come up in reports is this: 24,899. That’s the number of Democrats who did not return their absentee ballots in 2012. In past cycles Democrats have spent a considerable amount of time chasing absentee ballots that never come back. A voter will sign up for one in July, forget they requested it and accidentally throw it away when it arrives in late September. Ten days out from the 2012 election, 26% of Democrats’ requested ballots had yet to come back in, with 66,070 still out in the field. You can imagine the amount of volunteers and staff that went to knock on those doors in the final days.

That actually becomes the bigger problem for Democrats with their absentee efforts. There’s always going to be some ballots that don’t come back – if you have a 100% return rate, it probably means you only signed up people certain to vote anyway. The problem comes when you spend so much time chasing ballots that are gone, when a campaign could spend that time persuading swing voters or turning out supporters to satellite voting locations.

As you can see from the final 2012 numbers, Democrats had a lower return rate than Republicans. You can also see that Democrats big advantage at the start of early voting usually narrows by Election Day: 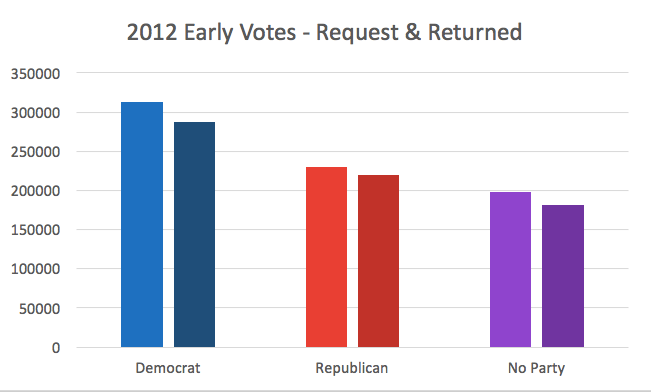 So to mitigate that problem, Democrats delayed their first round of absentee mailers until around mid-September. The national Clinton campaign reportedly researched when the most effective time of the campaign was to talk with voters, and used that data to adjust the early vote schedule. They also are focusing much more on in-person early voting at Auditor’s offices and satellite voting, which takes fewer campaign resources than continually knocking on doors of people holding onto their ballots. And their numbers have improved in the last week. The first day early vote numbers were publicly reported, Democrats were only at 45% of their totals in 2012 at that time. Now they’re to 56%.

However, there’s also obvious drawbacks to all of this. Most in-person early voting occurs during business hours of weekdays, so it’s much harder to get working people to attend. And even the best satellite locations may not yield huge results. In 2012 Obama visited Cornell College in Mt. Vernon for an early vote event. Over a thousand students turned out for the rally. Only a little over a hundred walked up the hill to the satellite voting location after it was over (the event was in mid-October and Cornell College has many out-of-state students – it seemed many had gotten absentees for back home by then).

And delaying absentee mailers this late was a risky approach – what if the return rate on the mailers are much lower than anticipated (as they seem to be)? You have that much less time to adjust your strategy. There’s also some concern over how focused the field effort is on absentees – a volunteer effort should have collected more requests by now even without the mailers. Democrats’ staffing levels are lower than 2012, but only by a small amount.

Not everyone followed this strategy. The Democratic state legislative committees enacted a much more traditional model. They sent absentee mailers to their targeted swing districts early, had their candidates and staff focus on absentee requests at the doors and sent a paid canvass team through their precincts as well. The results are obvious. 2,614 Democrats have requested absentees in Liz Mathis’ Senate District 34, home to three competitive legislative races. In next-door Senate District 33 in Cedar Rapids, a much more Democratic district with no close legislative battles, there are currently 937 Democratic requests.

What To Watch Next

Despite the awful-looking early vote numbers right now, Democrats may yet rebound. Once their in-person early vote push gets going, these numbers could jump significantly. And a very key number to watch is the return rate. If the requested ballots come back in quickly, campaign and staff will have more time to push people to other early vote sites. This weekend is particularly important to all volunteers – collecting ballots as soon as they come out is crucial, and a lot will be hitting mailboxes over the next few days.

Still, it’s difficult not to be extremely concerned over the state of Iowa Democrats’ ground game. If these numbers are indicative of very low voter enthusiasm on the left, Democrats could get routed at all levels in a state where the party is already struggling.

Clinton’s visit today will bring significant visibility to the importance of Democrats voting early. It’s going to take an all-out effort from volunteers and staff to get the early vote totals back to where they need to be. For anyone who’s stayed on the sidelines, this is the time to get involved.

If you want to follow along, the Secretary of State posts their updated numbers here each day. This other page shows you the daily numbers from 2012. Remember, Election Day is two days later this year, so you would compare September 28, 2016 numbers to September 26, 2012 numbers.