Monica Vernon’s Memorial Day started like many other Iowans: doing a little bit of yard work.

She picked several pink peonies from her garden to fill a vase to welcome home her youngest daughter, Eleanor, flying in later in the day. That was about all there was time for, though, as her campaign manager arrived to her Cedar Rapids house around 7:15 AM, lattes in hand, to head out for a morning of campaigning. Middle daughter Frances, also visiting home during Memorial Day, offered to drive.

Vernon has centered much of her second run for the 1st Congressional District around her involvement with flood recovery efforts during her service on the Cedar Rapids City Council. It’s a good talking point, but it also still plays a part in her day-to-day life. On the drive out from town, Vernon points out the houses that were restored from federal money, and the historical buildings they lost. She’s given a flood tour to every one of her new campaign staffers as they come on board.

“There’s where the Coast Guard staged their efforts,” Vernon says as they pass a house on the upswing of the city’s central valley.

Their first visit of the day is at the Meskwaki Settlement in Tama. Christina Blackcloud, a Democratic activist here, invited Vernon out to their pancake breakfast. The Vernon car pulls up outside the community center just as several older veterans are starting their Memorial Day ceremony, raising American flags as a drum circle sings.

After they finish and gather for pictures, Vernon heads over to introduce herself. 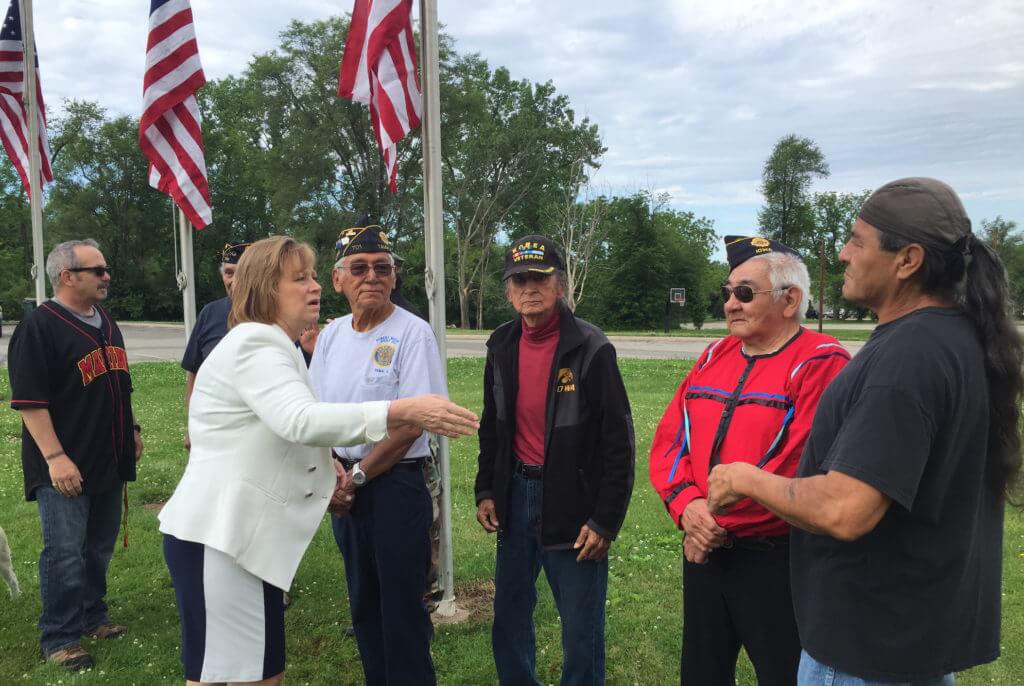 “It’s very nice for a person of your caliber to visit us, we don’t get that often,” one of the older veterans says, adding that he’s seen Vernon on television in her ads.

“Oh, come on. I look at all the caliber right here,” Vernon replies. “You guys are big time right here.”

Frances comes over as well to chat with the men, introducing herself and talking up her mother’s campaign.

“She’s as beautiful as you are,” exclaims one of veterans about Frances. “You don’t look old enough to have a kid that age.”

“Oh thank you, you know exactly what to say to a woman,” Vernon laughs.

Vernon, her daughter, and her campaign manager, Michelle Gajewski, head into the Meskwaki senior center to meet more people over breakfast. Frances and Gajewski grab some plates of eggs, pancakes, sausage and hash browns and sit down at the folding tables next to some of the tribal members. Frances talks with several people about how she learned her sense of public service from her mother, while also sharing stories of being a middle child.

Vernon, meanwhile, moves from table to table, introducing herself to everyone she can. There isn’t a lot of policy talk on this Memorial Day, and she’s not giving any public speeches at the events – it’s just showing up and saying hello.

“I don’t sit down and eat very often, I can’t stand to think I missed somebody,” Vernon says in a later interview. “Every person I meet has got a different story, something that adds itself to a sort of tapestry of the whole thing.”

Most of the stories she hears at the Meskwaki settlement revolve around healthcare issues. She suggests on their way out to Frances, who recently started medical school, that spending some time at the tribe’s clinic could be interesting.

“You guys are welcome any time,” shouts one of the older veterans as they leave. “I will vote for you!”

The drive up to Waterloo for their next Memorial Day event turns into a family road trip, with Frances and Vernon reminiscing about past adventures. Passing through Traer in northern Tama County, Vernon recalls a visit there when the family’s three girls were young.

“We came to a festival in Traer once where they had the Iowa State Star Singers,” Vernon recalls. “And I think that’s how we got three show choir girls.”

“During summers when we were young, we’d all get in the car to go on a family trip, but us girls didn’t know where we were going,” Frances notes on the drive. “As we grew up we realized mom and dad didn’t either. They just had a map. They’d decide we’d go up to Canada or something, and we’d just go in that direction.”

“Well, we kind of knew but we were so busy,” Vernon says. “If you overly plan them – we did so many cool things and it was just serendipity.” 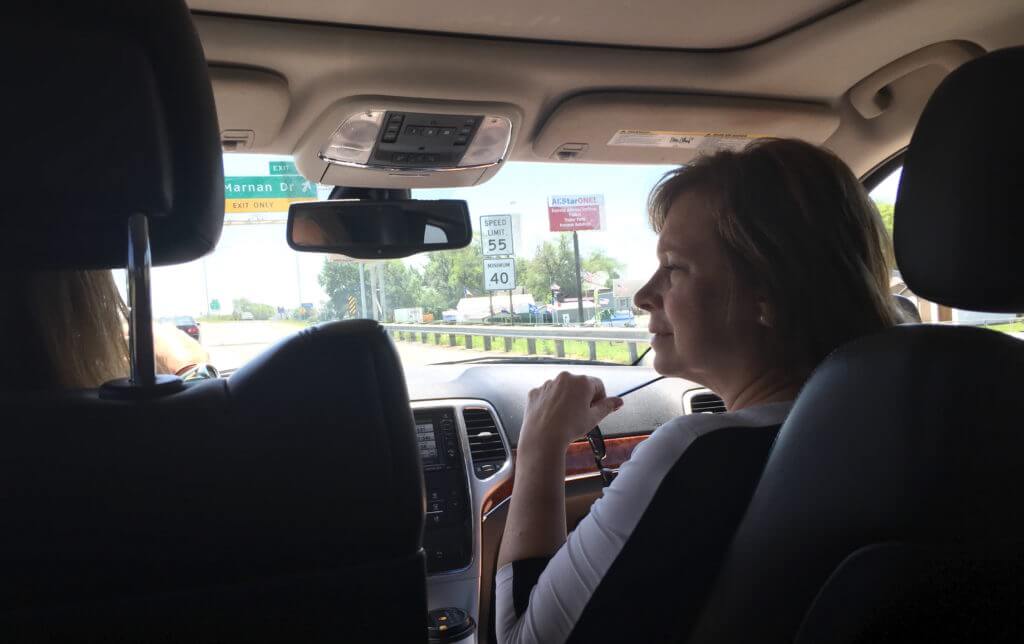 As talk turns to technology and GPS, Gajewski, who has essentially been adopted into the Vernon family and is the same age as Frances, comments on Vernon’s digital skills.

“She’s getting really great with the emojis,” Frances adds.

“So great. We were talking yesterday about going somewhere and Monica sent the girls-holding-hands emoji over and over again.”

“At 9:14 she landed,” Vernon comments later upon getting a text that her daughter Eleanor has arrived at the airport. “The eaglet has landed.”

Arriving in Waterloo for another Memorial Day celebration, State Senator Jeff Danielson meets them in the parking lot of the AmVets Post 49, one of the largest American Veterans posts in the country. There they look at the impressive sight of the post’s green field filled with hundreds of American flags. Each one comes with a plaque of a member who’s passed away.

Danielson, one of Vernon’s many endorsers in the 2016 primary, takes her around to meet his fellow members arriving for the ceremony.

“We’ll put you in the right places,” he tells her as they make the rounds.

Again, the talk here doesn’t center much on her candidacy or policy proposals, just on making connections. Vernon talks with one group of motorcyclists about a family road trip where they had the kids count motorcycles. They then happened to drive on the route to the Sturgis bike rally, keeping the kids rather busy.

Danielson follows up with attendees to give his pitch on voting for Vernon next week.

“She’s down to earth, she knows how to work with people and get things done,” Danielson says in a later interview. “I have first-hand experience when working on the flood recovery, she was there every day. As a council person, that’s pretty rare … There’s a lot of manufactured drama in politics these days. There’s a lot of folks who are focused on the wrong things. She’s focused on the people of the 1st District. Making sure they have a job that can pay the bills, affordable health care.”

Vernon enjoys a significant advantage in her primary campaign this time with the number of legislators and labor unions that have backed her. It’s helped make these types of retail visits around the district a lot more impactful.

“It’s like a neighbor – just that endorsement, even if the person isn’t there introducing me, sometimes that third party says ‘Hey, how do you know this person?'” Vernon says of the support she’s received.  “I think Iowa is such a state of zero degrees of separation in many ways, but sometimes there is one degree and it’s through the endorsers that we have something in common. And we start talking. It’s been a good way to be able to talk to people and get the conversation rolling and then we’re on to what we care about.”

Vernon goes to sit in the row of chairs up front between Danielson and State Representative Bob Kressig for the ceremony. She gives no speech here, but is recognized during the event and waves to the crowd of about 150. The band plays military songs, the veterans lay wreathes and the attendees bow their heads for several prayers.

Afterward, Vernon works the remaining crowd until every person has left, complimenting the veterans there on the rows and rows of flags. Near the end Danielson introduces her to the Coast Guard representative.

“You don’t hear about the Coast Guard until something awful happens in the country,” Lieutenant Robert Green, wearing a dress white uniform, tells Vernon.

“When Cedar Rapids had the flood, the Coast Guard was there,” Vernon says, recalling the old staging ground they passed earlier in the day. “You guys were awesome.”

Green mentions that he does recruitment for the Coast Guard Academy and inquires whether Vernon knows any good high school juniors or seniors.

“With Senator Grassley and Congressman Blum, they know about the Coast Guard Academy, but since they don’t offer appointments, I never get referrals,” he notes.

“Sounds to me like we’ve got a project,” Danielson says to Vernon, and they exchange contact information with Green. 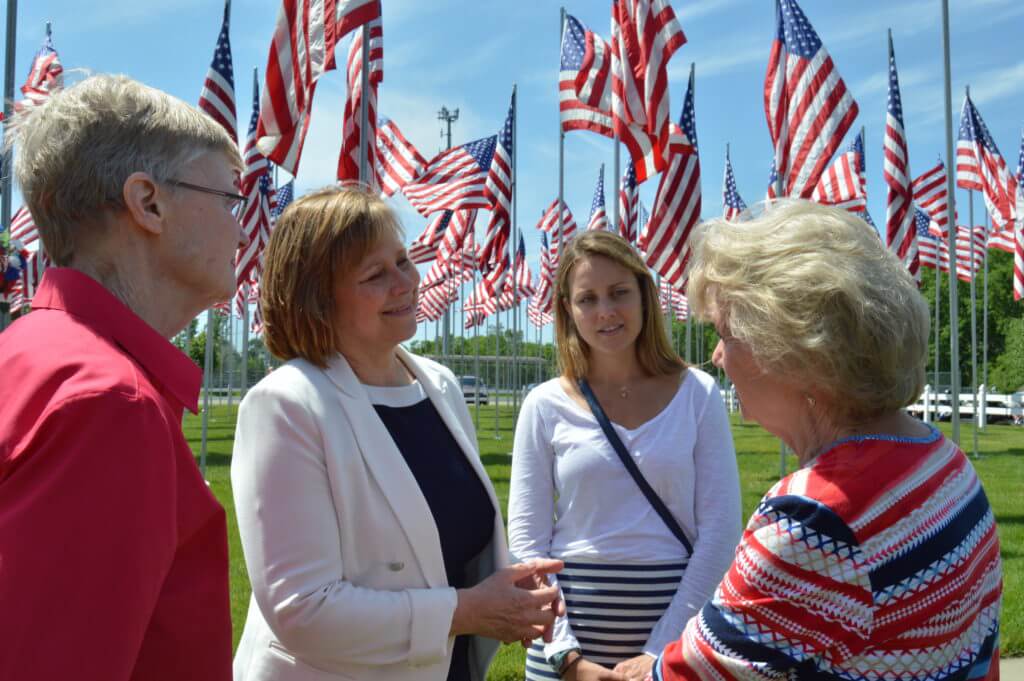 By noon Vernon is finished, and they pile back into the car to head home to Cedar Rapids, where Eleanor has arrived to the house. On the drive back Vernon reflects on the differences of her 2016 campaign with her prior 2014 one.

“’16 has built on top of ’14,” Vernon says. “We made a lot of friends in ’14, got to know a lot of people. We’ve reacquainted with a lot of people, this is just a build on that … It’s different because when I go to a community I’m making new friends, but I’m also seeing a lot of old friends … You don’t do it overnight. Everything we’ve built this time is on top of the foundation we built in ’14.”

Nothing much has changed on her messaging front, either. In this final home stretch to the June 7 primary, she’s sticking to her biographical focus on her leadership on the city council.

“I think they can count on me to be somebody who will work hard to serve them and a person who’s a problem solver,” Vernon says of her final pitch. “In the last week, we’re continuing what we’ve done – talking to people on the doors, on the phones. It’s a two way street, though, it’s important to hear what they say … I don’t think there’s any big magic to it, it’s continuing to do the hard work of reaching out to people.”

As the time ticks away to Vernon’s second bid for the Democratic nomination, she’s continuing to do everything a candidate in a tight race does: running TV ads, operating a full field/early vote effort, traveling the district non-stop. But she certainly must hold some strong confidence in how Tuesday will turn out: during six hours at events and on the road, Pat Murphy’s name didn’t come up once.

2 Comments on "A Day On The Trail With Monica Vernon"