“Hi, I’m Mike Sherzan. I grew up near the Fairgrounds and I’m running for Congress.”

Former businessman Mike Sherzan repeated that line close to a hundred times this past Saturday, working his way through festivals and picnics as he campaigned for Iowa’s 3rd Congressional District.

One of three Democrats running for the chance to take on first-term Republican David Young, Sherzan has the least electoral experience of the group, but not by much. Despite his relative obscurity on the political scene prior to 2016, he’s quickly become known to Democratic voters thanks to some smart TV ads and the retail politicking like he did this weekend.

Sherzan visits a VFW breakfast early on Saturday morning, then heads over to an IBEW picnic on the northwest side of Des Moines. He walks with a campaign staffer into the event held at a large park – blow-up play houses and slides, a video game station and some live music serve as entertainment.

After shaking some hands on the way in, he heads over to the group of labor leaders relaxing under a canopy, beers in hand, and exchanges his name with each of theirs.

“Now, quick question: what’s his name again?” one of the electrical union members quizzes Sherzan, and everyone in the circle cracks up.

“Mike. But don’t get me to pronounce his last name!” one of the men says.

“It’s not too hard: it’s like ‘Sure-Zayn,’” the candidate explains.

He moves on to talk with other attendees, briefly introducing himself and leaving a piece of campaign literature with each that describes a few of his policy positions. Some there are pleasant and chat with him, others just want to eat their hotdogs.

At one point he unexpectedly runs into a former employee.

“Nice to see you! And guess who I’m voting for!” exclaims Tana, who worked in accounting for Sherzan for about three years. It was well over a decade ago, and Sherzan recognizes her face, though not her name.

“This is my old boss, and all our extended family here today,” she says, encouraging the rest of her family to vote for him. “Small world, isn’t it?”

“I guarantee you, I’m not changing for anything,” Sherzan tells her.

After the IBEW picnic, he heads over to the Cinco de Mayo festival in the Valley Junction neighborhood in West Des Moines. On his walk into the event he gets stopped by a familiar face.

It’s one of Sherzan’s opponents, Desmund Adams, who ran out of a restaurant to say hello when he saw Sherzan walk by. The two chat about the campaign for a few minutes – the rivals share a friendly relationship with each other in their competition.

When he arrives to the Cinco de Mayo event, Sherzan finds many people who already know him. Nearly half of the voters he talks with bring up the TV ad he’s running in heavy rotation in the Des Moines media market. His ad is about his financial services business he ran and how he implemented equal pay for his female employees, many of whom rose to leadership positions in the firm.

“You’re going to win because of that ad you’ve got,” longtime Democratic activist Rita Perez tells him, meeting him in person for the first time at the festival. “It’s the best thing you could’ve done.”

“Have you seen his ad on TV?” Perez asks her friends sitting around a picnic table after Sherzan moves on. “He’s always paid the women the same as he paid the men.”

“Yeah, I saw that ad,” adds another woman.

If Sherzan is to pull out a surprise win in the June 7th primary, it will likely be thanks to a smart and well-funded campaign. It’s one that was only launched in December, well after his opponents. He’ll need it to be effective as he wasn’t very well-known in Democratic circles before this campaign.

Sherzan’s foray into politics began and ended back in 1974, when he served as the press secretary for Jim Schaben in the primary during the western Iowan’s run for Governor. He’s been involved in plenty of community boards since, but the name Sherzan is mostly known for his two brothers, who both were elected as state representatives on Des Moines’ East Side.

“It was not only a full-time job, it was a lifetime thing,” Sherzan explains of how his self-financed business dominated his life up until retirement. “Any time I could spare away from that was with my family.”

For the past three decades Sherzan ran a financial services firm that operated several investments and securities businesses, doing work all across the country and internationally as well. He left the business last year, handing it off to some of his employees, including several women.

Now his focus is solely on making it through the primary so he can defeat Young in this swing district. He’s already put $298,000 of his own money into his campaign, more than enough to blanket the TV airwaves and mailboxes with advertisements.

“Oh yeah, I’ve seen you on the TV – every single day,” a man at the IBEW picnic told him.

The Republicans are noticing too.

“I don’t think we’re going to stop in there,” Sherzan jokes as he passes the Polk County Republican booth at the Cinco de Mayo festival.

“Go David Young!” one of their volunteers says when they recognize Sherzan.

“Yeah, I’m looking forward to that one!” Sherzan shoots back.

Their next stop of the day is at an event for the Iowa Women for Progressive Change, which is holding a house party for four women running for state representative in the Des Moines metro. There’s no women in the 3rd District primary, and Sherzan has been centering his campaign’s message largely around issues of equal pay.

“My mother was a worker at Younkers – my wife and I have been married 38 years, we have two daughters and I have a granddaughter. How [women are] treated in life is a priority,” Sherzan tells the group of about 30 women and a few men.

He relates to them a story he often tells on the campaign trail, about how the CEO of a company he worked at felt about women in the workplace. The CEO once told Sherzan that he wouldn’t hire a certain pregnant woman applying for a job because she’d just have to leave for a couple months anyway.

“That’s a story that affects you mentally, because I was taught differently growing up about how to treat people,” Sherzan says. “Some day we’re going to get a law that requires us to prove that we’re doing that in our society.”

Many of the women in the room nod their head as he tells the story and thank him afterward.

The race for the 3rd District in November could easily turn on how suburban women feel about the Republican Party and their misogynist presidential nominee. Sherzan is hopeful the backlash against Donald Trump will favor his campaign, but he’s not particularly happy about it either.

“It’s sad because he builds his support on fear,” Sherzan says of Trump. “When he says he likes uneducated people, that tells me all I need to know. I don’t think we’re going to be a country better off because he’s a presidential candidate. I think it’s a negative sign, and if it serves to cleanse the Republican Party, they’ve going to have to use more than just bleach.”

If he secures the Democratic nomination, it will still be a tough fight against Young, no matter the political climate of 2016. And Sherzan – in his first full run for public office – is not a natural politician. There’s times he misses a chance for a hard sell to voters in-person for his candidacy, despite there only being a few weeks until the primary. But he’s doing well enough and seems to be improving as the campaign goes on.

And he does seem to enjoy it. At all his events that day Sherzan gladly worked the crowds, shaking hands and interacting with children, often complimenting them on their smiles. His loud, somewhat goofy laugh made its way into the middle of many conversations. 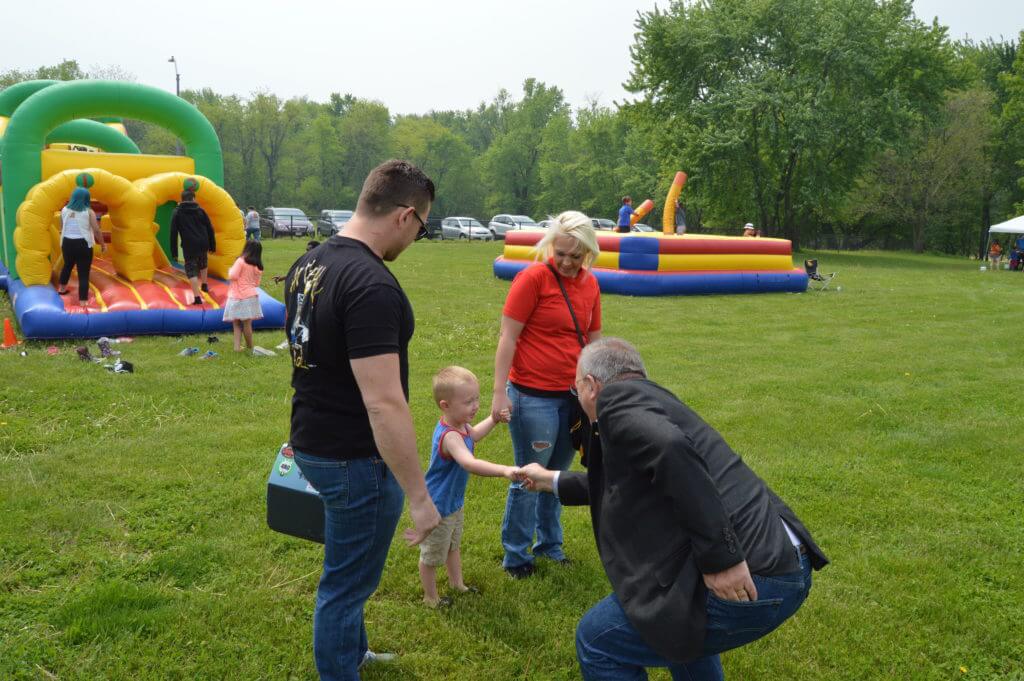 After talking with attendees at the women’s event, Sherzan returns to the Cinco de Mayo festival to drop his campaign manager, Derek Snyder, back off at his car. The two debrief while sitting on the sidewalk a block north of the festival. Snyder starts to head out, but Sherzan notices there’s a lot more people at the event now. He grabs a stack of campaign literature to do one last swing through.

“I’ll go until I run out,” he tells his campaign manager, and starts jogging back to the festival.

4 Comments on "A Day On The Trail With Mike Sherzan"