“Lemonade for Bernie!” read the sign held by some pint-sized entrepreneurs across the street from Bernie Sanders’ event in West Branch on Friday night. The Senator from Vermont happily obliged the young girls as his red SUV pulled up on the tree-lined street. Sanders paid his 50 cents, drank a cup of lemonade, chatted with the kids and posed for pictures before heading over to his rally.

Sanders entered the small town of West Branch, the hometown of a former President, into some picturesque Americana scenes for a classic Iowa Caucus-style event. A large crowd of locals and area Democrats filled the backyard of David Johnson’s house, snacking on cake and fruit laid out under a blue canopy. There was no major campaign stagecraft here – just a podium, a microphone, a banner and Bernie Sanders. Attendees sat on lawn chairs they brought, while a few swayed on the swing set behind the crowd. The rain held off, though a weather siren to call the small town’s volunteers out to a fire briefly interrupted Sanders’ speech . 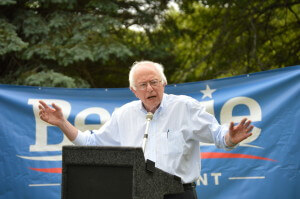 It’s well-known that Sanders enjoys a passionate fan base within the Democratic Party, but the size of his crowds at several Iowa stops were still surprising to say the least. Nearly 700 packed into Sanders’ event in Davenport, 88 in the middle of a weekday in Muscatine, and over 150 in the backyard rally in West Branch. A recent story in Politico claimed Clinton insiders fear Sanders the most in the primary, worried the left will rally behind his message. So far, there seems to be some merit to that concern in Iowa.

His admirers were easily pleased with Sanders’ speech Friday night. He hit upon a wide array of progressive topics, including wealth inequality, the problem of money in politics, bad trade deals, climate change and health care access, amongst a host of others. 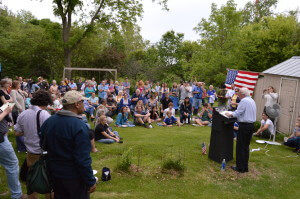 “What we have got to do is to create an economy that works for all of us, not just the top one percent,” Sanders implored the head-nodding crowd. He mentioned the country has been dealing with the issue all the way back to 1929, perhaps a reference to West Branch native Herbert Hoover’s administration. “We have all this wealth out there, and it doesn’t affect most people … The issue of wealth and income inequality is the great moral issue of our time, the great economic issue of our time.”

“Climate change is real. It is caused by human activity. It is already bringing devastation to parts of America and throughout the world,” Sanders added.

After speaking for about a half hour, Sanders spend the next 30 minutes taking questions from the crowd. As typical of a progressive Iowa Caucus audience, he got some rather in-depth queries. GMO labeling, the Patriot Act, mass incarceration, No Child Left Behind, mass-production hog farming, and Congressional inaction were a few topics brought up. 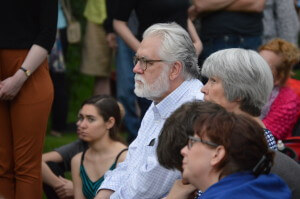 “I didn’t disagree with a single thing he said,” attendee Linda Carrillo said. “I think he has a very compelling message … His issues seem to be equality for all people. I think that’s going to hurt our country if we don’t do something about it. I think it’s a very uplifting message – I’m glad he’s out on the stump.”

“When a candidate speaks about the important issues, that’s what gets people’s attention – I like what I hear, and I’m ready to support Bernie,” commented Tom Carsner, who drove in from Iowa City. “You have to remember Hillary didn’t do all that well eight years ago, so I think there’s people looking for alternatives. He’s talking about climate change, health care, employment issues – all the things that a lot of other candidatse would shy away from or not talk in as much detail about.”

A number of attendees sported new Bernie 2016 t-shirts they got from the campaign, along with a few other homemade supportive shirts. Plenty there in West Branch were ready to back the Vermont Senator, but others were still unsure or backing Hillary Clinton, even though they liked Sanders’ message. 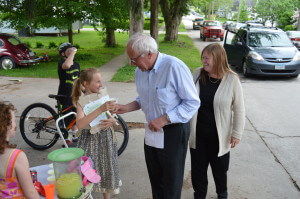 “Right now I’m leaning with Hillary,” said Carrillo. “I’ve worked in politics a long time. It’s a lot of work. So when I work I want to work for someone I think can win the general.”

Others were similarly torn. “I’m a little bit between him and Hillary,” said Emilie Blindt, the mother of the lemonade-selling girls across the street. She mentioned she’s known the Clinton family her whole life, and even worked a summer camp with Chelsea Clinton. “A woman president? I’m a woman business owner.”

“I love the progressiveness about Bernie,” she said. “What I worry about is that people won’t think that people will vote for him. So they’re going to pick Hillary because she’s got a bigger name. In a perfect world, I would love to have Bernie Sanders as well.”