Two items on a fundraiser invitation from Sen. Joni Ernst’s campaign drew the attention of national politics watchers this week: “location provided upon RSVP” and the name of a consulting firm at the bottom of the invite.

“Wait … fundraisers are back?” Politico opined in its Playbook PM newsletter, which included a copy of the invitation. 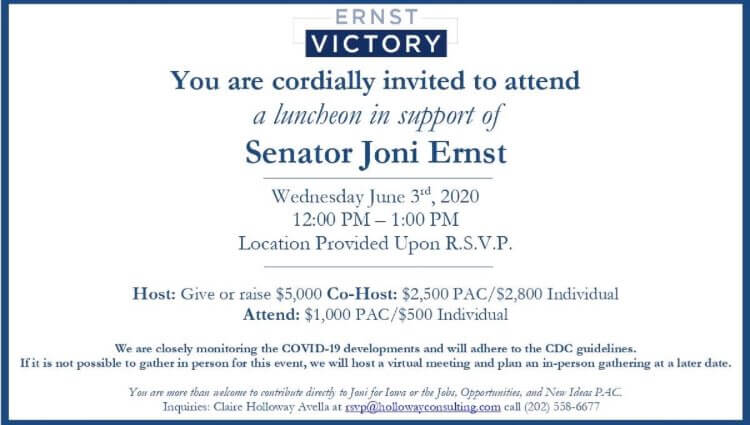 Though the in-person luncheon is planned for June 3, the invitation notes, “We are closely monitoring the COVID-19 developments and will adhere to the CDC guidelines. If it is not possible to gather in person for this event, we will host a virtual meeting and plan an in-person gathering at a later date.”

The fundraiser is scheduled to take place one day after Iowans vote in the June 2 primary. It is unclear in which state the event will be held.

Gov. Kim Reynolds’ latest public health order extends a ban on social gatherings of more than 10 people through the end of the month, though restaurants, retail stores and other businesses across the state begin reopening today (with social distancing restrictions). In Washington, D.C., however, the mayor has extended the district’s stay-at-home order through June 8.

“Iowans deserve a senator who will lead by example,” said Iowa Democratic Party spokesman Jeremy Busch. “But once again, Sen. Ernst’s actions prove her unfit to represent us in Washington.”

The second point of interest, particularly for those who have followed the thread of Ernst’s alleged campaign finance violations, was the Holloway Consulting email address listed at the bottom of the invitation.

Holloway Consulting provides fundraising support for Ernst’s reelection efforts, as well as the Iowa Values organization, a so-called “dark money” group which has come under scrutiny for its close ties to the Ernst campaign.

A December Associated Press investigation looked into documents, emails and a strategy memo that show “Ernst and her campaign worked in close contact with Iowa Values.” As a 501 (c)(4) political nonprofit, campaign finance law does not allow the group’s primary purpose to be campaign work or to coordinate with a candidate they support. Though Ernst’s team has not specifically refuted any of the AP’s findings, they deny any wrongdoing.

In an analysis of Ernst’s Federal Election Commission filings, End Citizens United found the senator’s campaign, leadership PAC and joint fundraising committees paid more than $137,000 to Holloway Consulting and Jamestown Associates, which ECU says is another consulting firm tied to Iowa Values, in the first three months of 2020. Throughout the 2020 cycle, ECU found, Ernst’s campaign and affiliated committees have paid the two firms $793,000.

Part of the AP’s findings were that Ernst appeared to pass a donor along to Claire Holloway Avella for a donation to the Iowa Values organization.

“Sen. Ernst continues to operate her campaign with no regard for the law or transparency and the evidence is mounting,” said End Citizens United president Tiffany Muller, in a statement. “Iowans are fed up with these shady political schemes that Ernst has been using to stay in power. It’s no wonder Iowans don’t trust her anymore.”

Public Policy Polling released a new survey this month showing Ernst leading Democrat Theresa Greenfield by 1 percentage point in a general election matchup. The poll of 1,222 Iowans found only 37% of voters approve of Ernst compared to 43% who disapprove.