Postville, Iowa is confirmed to contain the vast majority of Allamakee County’s high number of coronavirus cases, according to new Veteran’s Memorial Hospital data uncovered by a local elected official.

Around 90% of the rural hot-spot county’s cases are contained in the Northeast Iowa town, home to Agri Star, one of the nation’s largest kosher beef plants and the recent target of a state strike team testing. At-large Waukon City Council member John Ellingson said he received the hospital data on Monday, which was corroborated with the Allamakee County sheriff’s counts, after being denied Iowa Department of Public Health information.

“To the Iowa Department of Public Health-your failure to comply with Iowa Open records law only demonstrates the ingrained elitist belief and contempt for common Iowans Des Moines & state bureaucrats have shown for years,” Ellingson wrote on Facebook that day before making the data public in a post.

The published information, which includes numbers of hospitalized, recovered and deceased county residents, will be updated a couple of times per week and if there is a sudden uptick in cases, he said.

Allamakee County was one of the state’s first rural outbreaks, and the number of cases there and in surrounding Northeast Iowa counties have steadily rose in the months since. With 112 confirmed cases as of Tuesday morning, Allamakee has the ninth-highest per-capita infection in Iowa.

The new data also revealed that in the rest of Allamakee County, which has a population of 13,880, Waukon and New Albin contain three cases each, Waterville and Lansing have two and Dorchester and Harpers haven’t been affected by the virus. 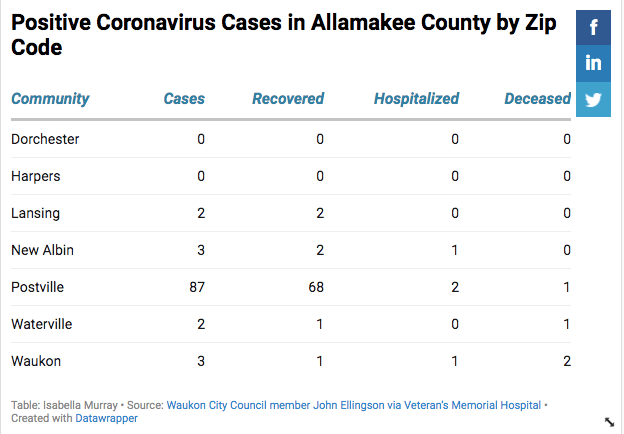 Ellingson, who works as a political consultant, said he requested the information after hearing talk of widening disparities in case numbers between the rural communities and anxiety surrounding the deaths of a few better-known county residents.

Representatives from the Iowa Department of Public Health have said that the only COVID-19 reports available are on the state’s website, which includes county information and some regional specification — not separated by individual towns, however.

“I want to know that information for when the Waukon cases jump from three to nine to 20 to 50, I can monitor it and take protective precautions for myself and my family. And our staff at the city. That’s why I wanted it … It’s clear to me it hasn’t hit here yet, but I want to know when it’s in my neighborhood,” Ellingson said in an interview with Starting Line.

“[Of the four COVID-19 deaths in the county], one was from Waterville and two from Waukon here, and they’re people that we all know. They’re well-known people, and that spooked people … You have to weigh that with the economy getting crushed.”

Finding The Information Without State Help

Ellingson said he requested the zip-code specific data for positive cases of coronavirus in Allamakee County on Friday via the Iowa Freedom of Information Act — first through the Veterans Memorial Hospital public health office, where the request was later directed to the state.

After some back-and-forth contact with the Iowa Department of Public Health, Ellingson said a representative told him it was not their protocol to release his requested information, though he said they could not cite Iowa code which provided him a reason.

The department later told Ellingson that they would not divulge numbers by community because some of the disparities between numbers may lead people to focus on a single community — highlighting the Latino or Hasidic Jewish population in Postville in an anti-Semitic or racist manner.

Following Allamakee County’s first cases in mid-March, an Orthodox Jewish news publication reported that three positive cases of COVID-19 were confirmed in Postville and linked with travel from Jewish communities in New York City and Iowa.

The publication later released a statement from Agri Star that confirmed the positive cases.

“All three cases were in the same family,” the statement said, and included “two parents and an older son” who were immediately quarantined upon exhibiting symptoms of the virus back in Postville. Others who came in contact with the family — although not showing signs of the virus — also were quarantined, according to Agri Star.

And while Postville, and Agri Star, lost a significant amount of the large Latino community they employed when the plant was subject to one of the largest immigration raids in the country over a decade ago (the anniversary of which is today), there’s many that still remain in the town.

“Ultimately, I got no satisfaction and no relief from the Iowa Department of Public Health,” Ellingson said — he then planned on filing a lawsuit for the release of the information.

But Ellingson said he was soon supported by Veteran’s Memorial Hospital, their administration, the Allamakee County sheriff and some county officials in his quest for the information and worked with them to support its release.

The hospital data’s count of 97 positive COVID-19 cases is lower than the state’s count of 112 positive cases in Allamakee County on the same day, however. 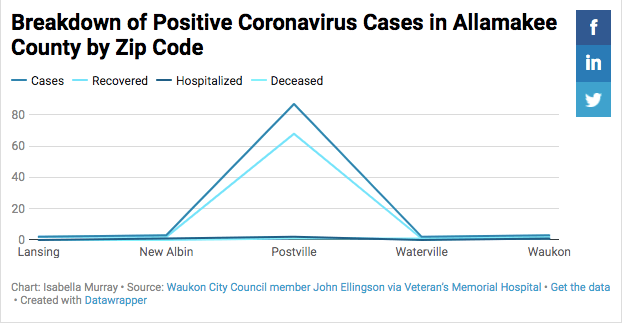 The itemized numbers come after Gov. Kim Reynolds said Monday in her daily news conference that a strike team was sent up to Postville to the Agri Star kosher beef plant last week.

According to a press release from Agri Star, 12 workers have tested positive for coronavirus out of the 463 workers who have gone through volunteer testing.

“The reason you’re seeing a tick up, an increase in the positive cases is because we did one of the strike teams — we sent a strike team to Agri Star like we’ve done in many of our manufacturing and processing facilities,” Reynolds said at the press conference.

Most of Allamakee County’s positive cases, however, came before this past week. April 24 saw a jump of 26 new cases in the county.

According to a news release from the company and Allamakee County Emergency Management, the testing was requested by Agri Star in April but was not done until last week because other large facilities across the state were prioritized first.

“It helps us help the employees that have tested positive to begin a road to recovery and then as they work through the timeline that they need to recover then, again, they feel they have the confidence to return back to work and to return to a safe environment,” the company said.

According to Ellingson, the “fairly large conservative movement” in Northeast Iowa has not been in favor of some of the economic and social lock-downs that Republican Gov. Reynolds has put forth, which also prompted him to seek out additional information.

“Postville, who is in the far southwest of the county and does have the high numbers,” shouldn’t be handled the same way “Lansing and Weldon, who are 45-50 miles away” are, Ellingson said.

Currently, the Governor’s restrictions have continued for residents of Allamakee County. Starting May 1, Reynolds allowed  77 counties with lower case counts to start reopening. For them, restaurants, retail stores, closed malls and fitness centers resumed operation at 50 percent of the business’s capacity.

But Allamakee is one of the 22 counties exempt from the loosening of restrictions until May 15, because they’ve had increasing virus spread in recent weeks.

“I always tell people to follow the Governor’s recommendations as best we can. But we are to the point we’ve seen it crush our hospital. Absolutely destroy our hospital, crush our small businesses, we might be losing some of the best small businesses we have,” Ellingson said. “You’re not going to see a revolt, but the governor is rolling back and opening up the economy not based on numbers and data, because that’s not consistent with what she’s doing. I think she’s doing it [because of] political pressure.

But Matt Tapscott, a Democratic state senate candidate in the 28th District, which includes Allamakee County, said that he makes many calls each week to registered voters — most of them Republicans or Independents.

Tapscott said that all the people that he’s talked with are not overly panicked, but have said their biggest concern is about getting more information on the virus. The candidate said that nobody he has spoken with has expressed discontent with following social distancing and stay-in-place orders.

Reynolds is expected today to announce which restrictions will be lifted for all Iowa counties, including those like Allamakee.