Congresswoman Cindy Axne is not one of the House freshmen that national politics watchers follow on cable television, Instagram or on their Twitter feeds. But for Axne, that’s the way she likes it.

While Axne’s staff will post images of her visits across the 3rd Congressional District, you won’t find her providing a play-by-play of her day to social media followers or teasing an appearance on CNN.

Though she has largely stayed out of the national spotlight during her first eight months in the U.S. House of Representatives, Axne told Starting Line she has the attention of leadership in Washington.

“I absolutely have the ear of the Speaker and leadership, so does Abby,” said Axne, of her fellow Iowan, freshman congresswoman Abby Finkenauer. “They know how important our roles are to maintain the majority. The majority did not come around from ‘The Squad.’ The majority came from people like me who flipped these tough-to-win seats.”

Axne, of West Des Moines, was one 44 House members placed in the “Frontline” program this year by the Democratic Congressional Campaign Committee because of the competitive nature of her district. The National Republican Congressional Committee zeroed in on her seat as a “prime pickup opportunity” in their effort to retake the House majority.

In 2018, Axne unseated two-term incumbent Rep. David Young by 2 percentage points, 49% to 47%. Young already has announced his intention to seek the Republican nomination and challenge Axne in 2020.

Once outside Des Moines and its burgeoning suburbs, the 3rd District becomes a sea of small towns and rural communities that largely vote Republican.

“That’s a very different job than a lot of our other freshmen colleagues who have a much larger national exposure, but they come from incredibly safe seats where they don’t necessarily have to make sure that they’re addressing multiple issues like I do,” Axne said, Saturday in a conversation with Starting Line, as she visited four counties in her district.

The 3rd District, spanning 16 counties from Des Moines to Council Bluffs, has nearly the same number of registered Democrats as Republicans, with 170,121 active Democrats and 169,878 active Republicans. There also are 175,821 “No Party” voters in the district.

“The Democratic Party is varying shades of how they would like to see things get done,” Axne said, acknowledging the ideological diversity of her district, during a quick lunch break at a Subway in Mount Ayr. “My job is to listen to that, take their feedback with me to Washington and utilize that in the best way I possibly can to put forth policy that helps us.

“Sometimes that means I might not be doing something that somebody wants me to do on some bill,” she continued, “but it might be the best thing for our district. I just have to really keep moving in the direction of standing by those strict values that I’m bringing there with me, which is putting more money in the pockets of the people in this district and lowering their expenses.”

Running On A Record

Out of “frustration” at a recent Democratic caucus meeting in Washington, Axne stood up to ask why the party wasn’t talking about President Donald Trump’s latest trade war, an issue deeply felt in agricultural states like Axne’s.

Not long after she spoke up, Axne’s colleagues told her “Speaker [Nancy] Pelosi was talking about trade in, like, every meeting she was having.”

“So, I’m going to keep bringing it up at caucus when we get back in September,” Axne said, “and continue to push for that, folks.” 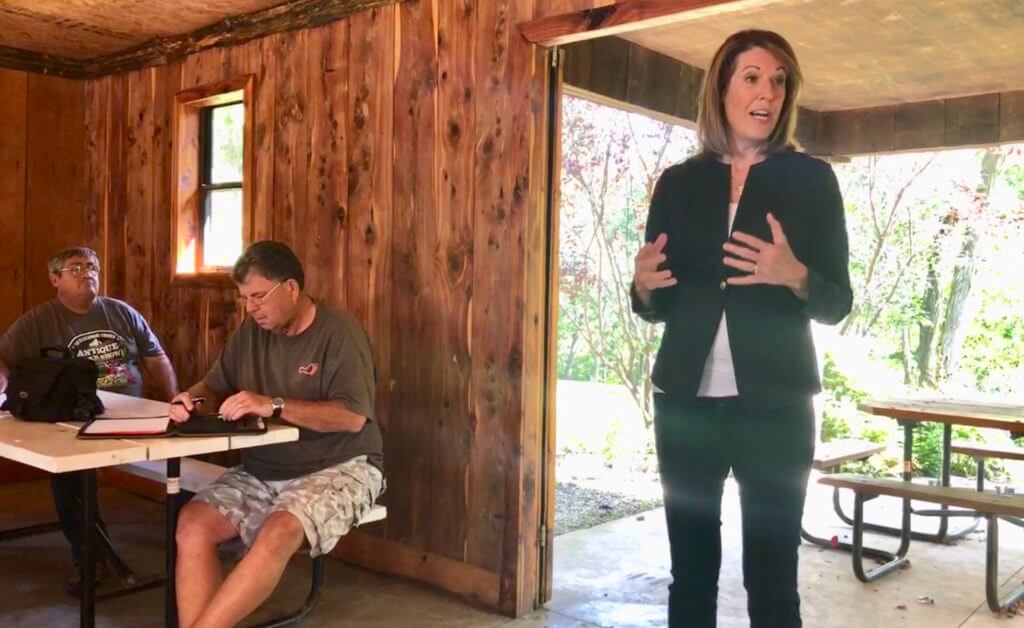 For a member of Congress in their first reelection fight, it can both be a positive and negative to have a voting record behind your name.

Axne is the only Iowan on the House Agriculture Committee, a responsibility she holds in high regard.

“I hope people start realizing that farming is not part of partisan politics,” she said. “Farming is an incredibly impactful industry. It feeds and fuels this country. It shouldn’t be looked at from an ‘R’ or a ‘D’ perspective. We all need to support our agriculture community.”

In the first half of her first term, Axne has signed on to big pieces of Democratic legislation like the $15 minimum wage bill and efforts to lower the cost of prescription drugs, but she also has taken up her own initiatives around the Environmental Protection Agency’s biofuel waivers and affordable job training programs.

“We have big issues that we’re addressing, absolutely. But we can’t walk away from hardworking people in this country who need our help when this president is decimating their opportunity,” Axne said, referencing Trump’s trade disputes and the use of Small Refinery Exemptions that are harming Iowa’s ethanol industry. “We need to stop for a minute and think about what’s happening and making sure we’re addressing it, and now it’s a priority for her [Pelosi].

“I know they understand how important it is for us to keep our seats.”

A significant accomplishment came early for Axne when she secured $3 billion in a June appropriations bill to help flood victims in Iowa and the Midwest.

“A lot of this has to do by using those sharp elbows from six-on-six girls basketball,” Axne said, at the town hall, “because I was texting the head of appropriations at, literally, almost midnight — which is not protocol, let me tell you that much.”

Throughout her district tour over the weekend, Axne referenced the “sharp elbows” she honed playing basketball in her youth, a personal tidbit she used to connect with her female constituents and emphasize her commitment to being heard in Congress.

“I’m standing up and being the voice of 10 representatives because we only have four here, so we’ve all got to be the voice of 10 and make sure that the issues that Iowans are facing are addressed,” Axne said.

The congresswoman’s latest district tour included stops in Union, Ringgold, Taylor and Adair counties, where she visited with health care professionals at Child Health Speciality Clinics in Creston; a town hall in Mount Ayr; a 19th-century family farm in Clarinda; and the Iowa Aviation Museum in Greenfield.

From an intimate setting at a rural health care clinic to inches away from a herd of cattle, the tour showcased the varying needs of a diverse district.

The rural museum was thrilled to welcome a high-profile visitor, proudly showing off their vast collection of historical documents and memorabilia that highlight Iowans’ contributions to aviation. 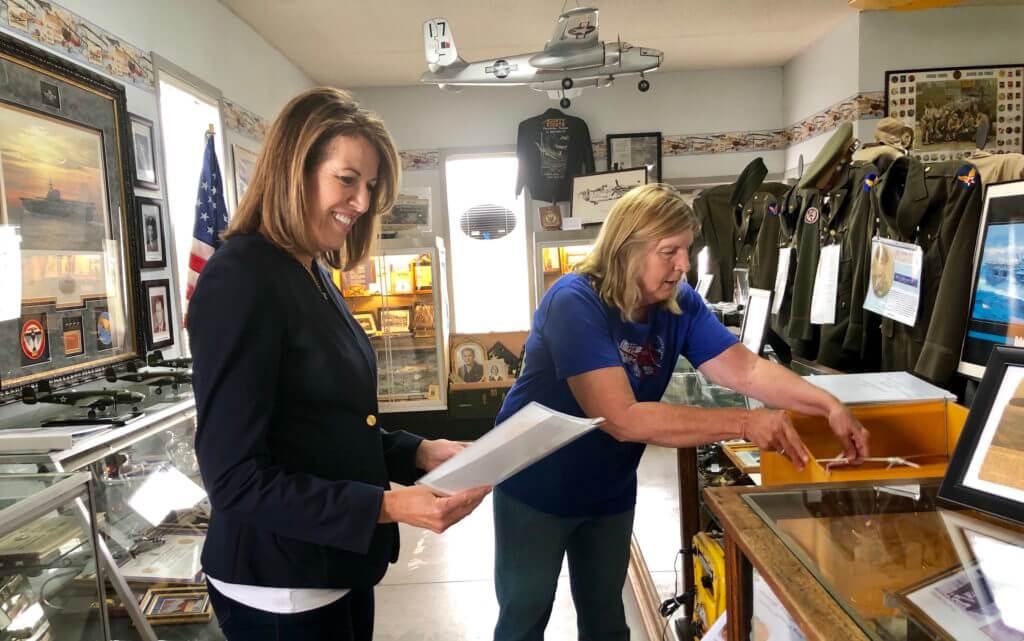 Though her staff always watched the clock to keep Axne’s tight schedule in check, the congresswoman never failed to thank her hosts and talk with them personally, even staying extra time at the Clarinda farm for a glass of lemonade and conversation with the family.

Axne’s experiences so far have shown her that Pelosi and other leading Democrats working to wrangle an outspoken freshman class know it’s not “The Squad” — Alexandria Ocasio-Cortez of New York; Rashida Tlaib of Michigan; Ilhan Omar of Minnesota; and Ayanna Pressley of Massachusetts — that will keep them in power in 2020, but purple district Democrats like Axne who put in the work on the ground to connect with voters.

“They know we have a message that resonates with people, that we have an understanding and are authentic to the districts that we represent,” Axne said. “And the way that we will continue to win as Democrats is to put people up for office that have those qualities, that truly are ones who just care about their community, don’t care about being called an ‘honorable’ or a congresswoman or anything, but who saw a problem and said, ‘I’ve got the skillset to do this, I care about these people and I’m ready to step up.”

2 Comments on "Cindy Axne: Out Of The Spotlight, Key To The Majority"