In many ways, it felt like Bernie Sanders’ 2016 campaign never ended.

At his stops in Iowa this week following his official 2020 launch, Sanders rallied the faithful in packed rooms to get on board with his second run for the White House. In speeches that clocked in at just over an hour’s length, all the old progressive issue mainstays of his last campaign made their appearances. So too did the enthusiastic chants and cheers of his motivated, diverse supporter base.

And as Sanders himself pointed out often in his speeches, the 2016 campaign was less a campaign than it was a movement, and that movement has seen rolling successes across the country.

“Those radical ideas that we talked about four years ago? Well, today, virtually all of those ideas are now supported by a majority of the American people,” Sanders said in Des Moines after ticking off a series of his proposals deemed “too radical” by many in 2016. “They are ideas that Democratic candidates for school board to president are now campaigning on.”

But there was one very important difference this time around: Sanders is getting these kinds of crowds at the outset of the Iowa Caucus campaign, not just in the final months.

Over 1,300 showed up to his Des Moines rally at the Fairgrounds, and that was the smallest of his rallies. Students made up much of the 1,500 in Iowa City, where another 500 crammed into an overflow room. The campaign counted 2,000 attendees at their Council Bluffs event, which included many neighboring Nebraskans (who obviously can still send their volunteer support). 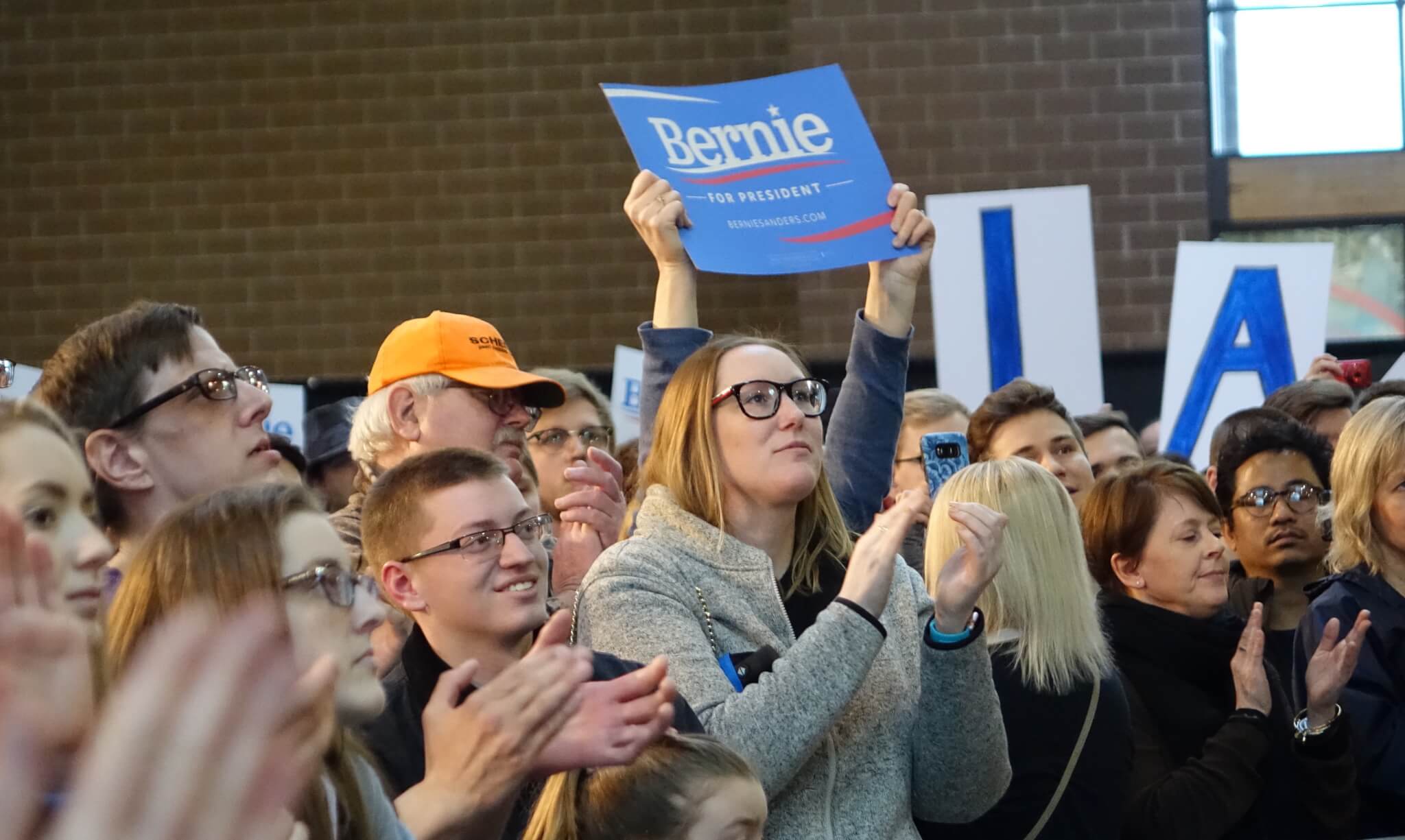 It came on the heels of Sanders’ incredible $10 million haul in the first few days of his campaign. A few hours after Sanders left Iowa, a new Des Moines Register poll put him in a close second – and within the margin of error – in the early caucus race, garnering 25% of caucus-goers’ support to Joe Biden’s 27%. Notably, Biden’s numbers had started to decline.

An amusing narrative began to build among national reporters who had fanned out over Iowa in the first two months of caucus campaigning this year. Sanders’ support was fractured and diminished, some thought, because many former Sanders caucus-goers they met at other candidates’ events had moved on from Sanders or were considering other 2020 contenders.

But that was a basic misread of Sanders’ core base.

The most ardent Sanders supporters wouldn’t show up to an Elizabeth Warren event. They’re not weighing their options. A good portion of them aren’t Democrats. Many weren’t involved in politics before Sanders’ 2016 run, and many of them are just fully reengaging now for his reentrance into the race. Some past Sanders activists integrated into their local Democratic county parties, but many stayed outside the party structure.

And those who understood Sanders’ coalition in the 2016 Iowa Caucus knew it was never all going to come right back to him for 2020. It doesn’t need to. Even without the Democrats who caucused for Sanders because they didn’t like Hillary Clinton, and without the party loyalists who generally prefer the more progressive candidate but have more options now, Sanders is still well-positioned for a win. 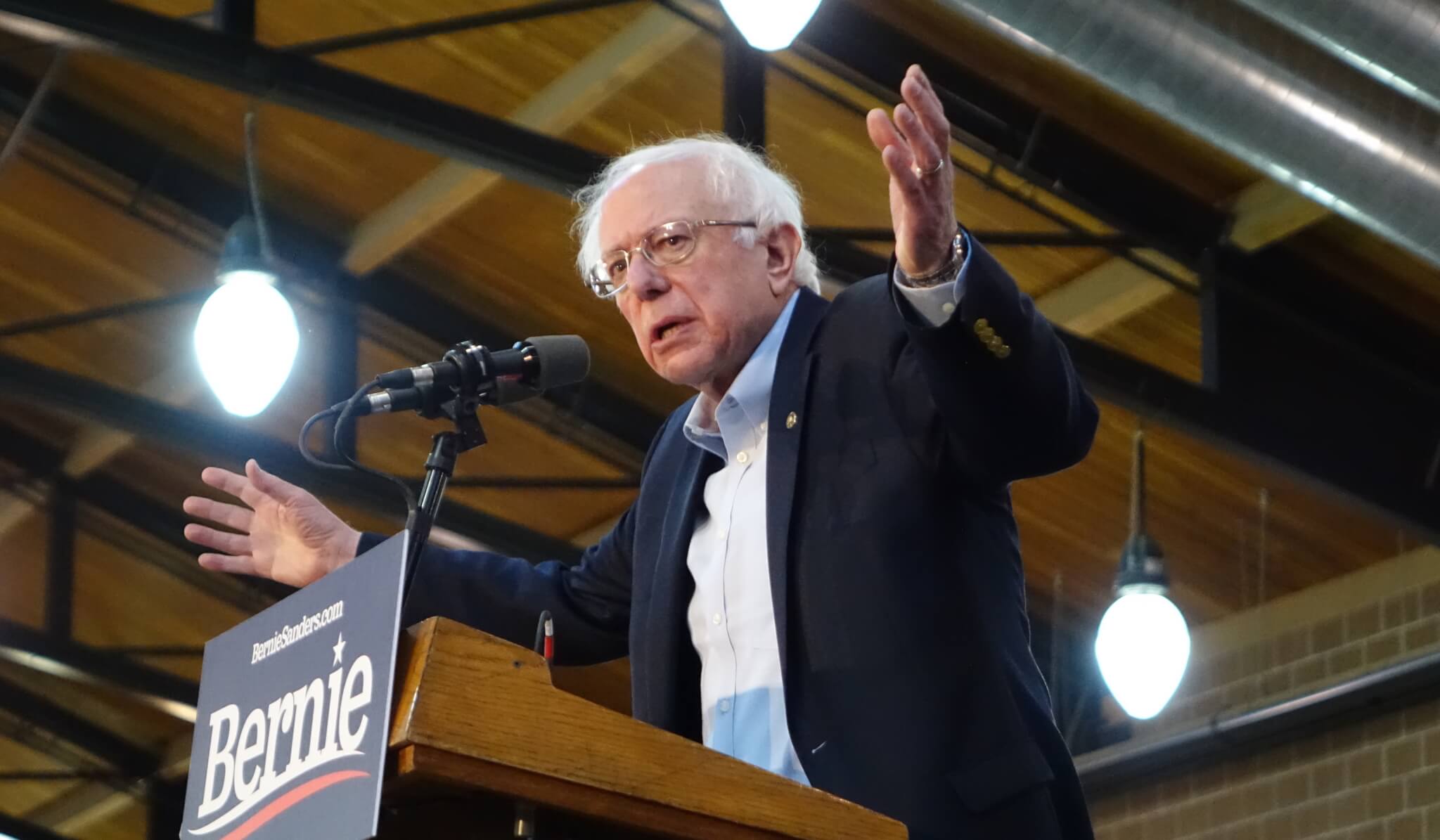 It may only take 20% to 25% on caucus night to come in first. Sanders can easily accomplish that with what he starts with. And Sanders has the clearest path to the nomination of any candidate: top the field in Iowa, score a decisive win in New Hampshire, and come in the top three in South Carolina with improved support among African American voters. Take that momentum to get enough Democrats who are skeptical of Sanders to start to rethink his candidacy and ideas, and you’ve got the recipe for a Sanders nomination.

With this huge of a Democratic field, and in the weird political times we live in, it would be foolish to make any longterm predictions, no matter a candidate’s initial strength. But it is abundantly clear that Sanders at least starts out the 2020 race as the clear front-runner.

Rally For The Faithful

Sanders’ first three rallies in Iowa were clearly for the Bernie faithful. Timed and located in venues staged for maximum turnout, Sanders saw boisterous crowds at his three Iowa rallies, filled with people still wearing their campaign t-shirts from 2016.

The staging and messaging of his initial trip seemed aimed at reengaging his core base and getting them signed back up for the next campaign. Sanders’ speech was his traditional lengthy oration that ran through nearly every major national problem and progressive policy solution imaginable. In Council Bluffs, he closed with a refrain of “When we’re in the White House,” joking at one point that it may be a little crowded in the Oval Office with all his supporters. 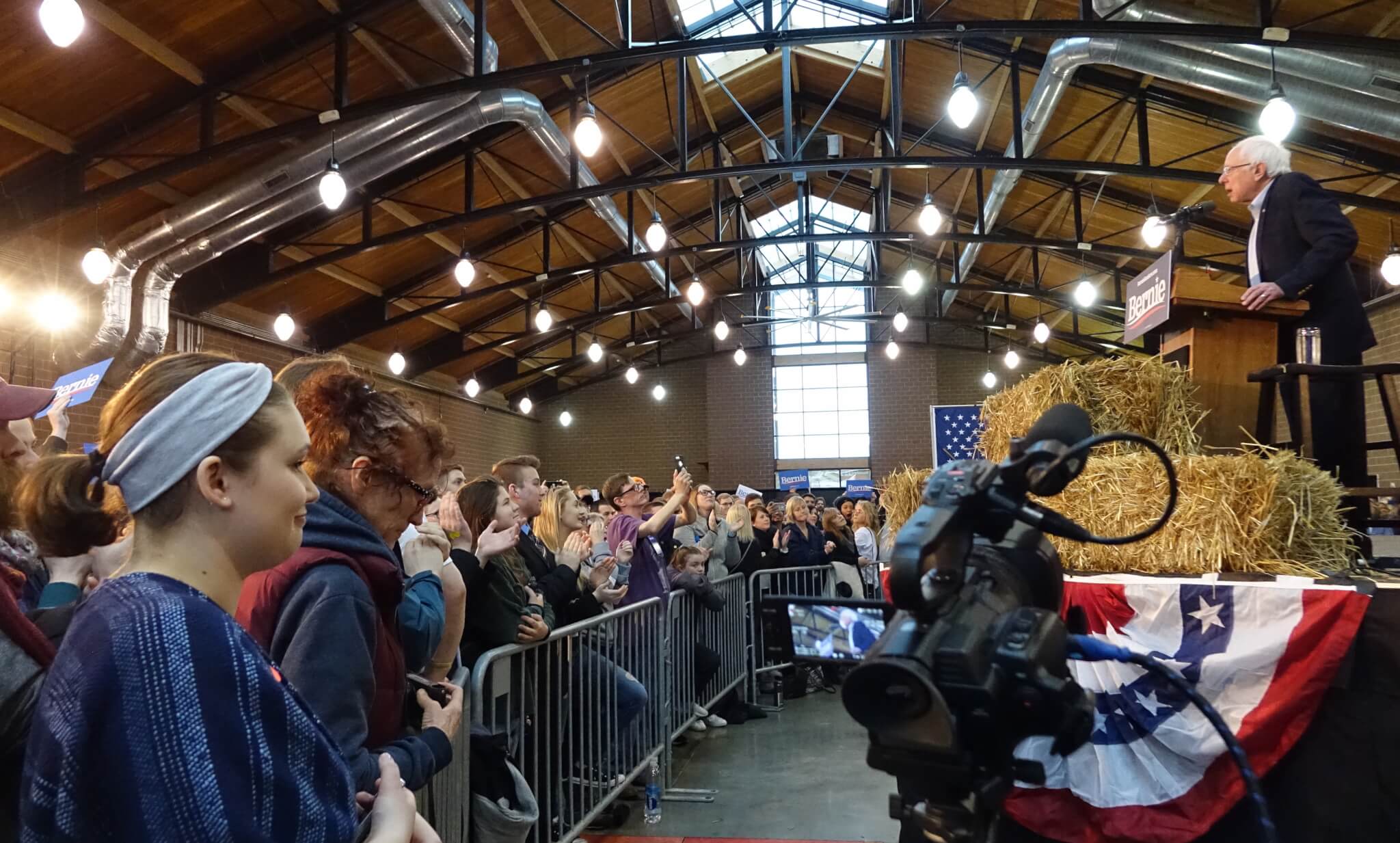 To those already on board with Sanders, it was a political revival festival. For those who weren’t, there wasn’t an opportunity to ask questions.

Also readily apparent at Sanders’ events was his biggest advantage over the rest of the 2020 field: a massive volunteer infrastructure.

While other Democrats like Kamala Harris, Elizabeth Warren, and Cory Booker are seeing sizable Iowa turnouts, many of those attendees still remain undecided. Speak with many who go out to those events and you’ll find Iowans who say that candidate is in their top three, but they’re still deciding – and may be deciding for quite some time. 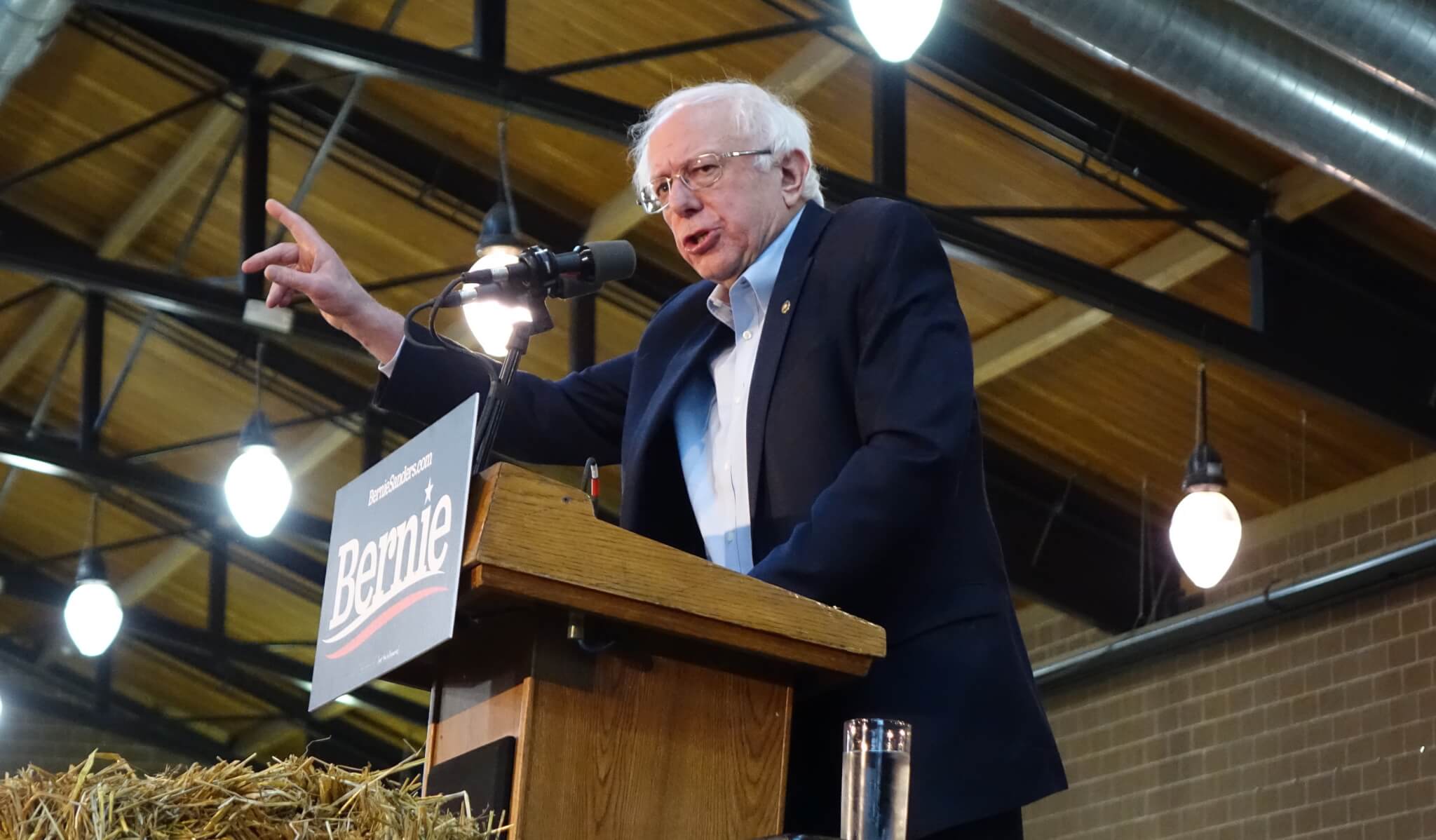 Sanders has an active base right now. He had so many volunteers at each rally that many of them had nothing else to do but stand off to the side. The sign-in process was the most professional of any campaign so far, with volunteers armed with tablets to collect attendees’ information.

And while other Democrats may eventually close the gap in polling numbers and a volunteer operation, Sanders can start filling filed offices just as soon as they open them. That gives him months and months of lead time where an army of Sanders volunteers are out knocking doors, making phone calls, and messaging possible caucus-goers.

It’s unwise to read too much into a candidate’s first visit to the state, as sometimes they’re designed for a very specific objective. That seemed to be the case here, which was a smart effort to reconnect with Sanders’ most motivated of supporters. His next trip could look much different.

And at some point, Sanders will need to find ways to expand his appeal to more corners of the party. A 25% win with a devoted Iowa base can get the momentum going, but eventually he’ll need 50% in later states when the field narrows significantly. His campaign has already signaled a willingness to do that, with his kick-off speeches including more of his personal biography in order to better connect with those not swayed solely by policy talks.

Obviously, Sanders can’t accomplish that by just holding huge, nonstop rallies all over the state that don’t include a Q&A section. It seems like he’s already looking for alternative events, as he did one off-the-record visit to a senior citizens home in Des Moines between his Council Bluffs and Iowa City events. Since his support skews younger, a greater focus on older Iowans could be key to Sanders expanding his appeal. 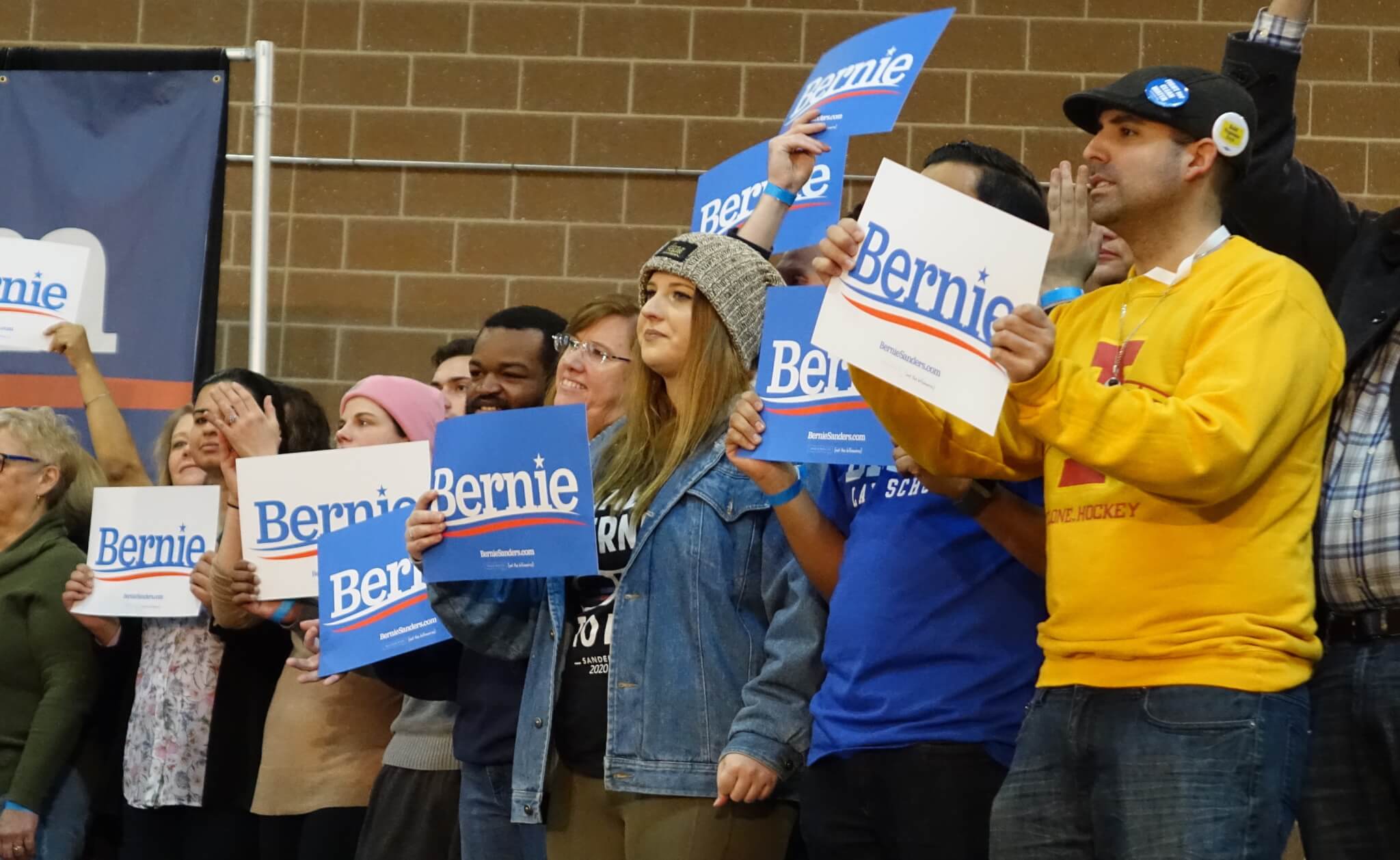 But that’s the other big luxury Sanders has with a locked-in base: time. In 2016, a significant amount of his early campaign travels in Iowa were designed simply to introduce himself to an electorate who, as Sanders himself put it this week, “not a whole lot of people knew who the junior senator from Vermont was.”

While his eventual field operation manages his volunteers, Sanders can start the work of winning over people who didn’t caucus for him in 2016, or winning back those who were in his corner more as a rejection of Clinton. That could include smaller events in rural counties, house parties, and drop-bys at coffee shops and community centers, all of which could give Sanders a chance to make more of those personal connections that are so important in the Iowa Caucus.

That’s where the most interesting part of Sanders’ 2020 candidacy will lie. Because if he can expand his already-strong appeal in a crowded, fractured field, Sanders could easily turn his front-runner status at the beginning of the campaign into an acceptance speech at the national nominating convention next year.

2 Comments on "Sanders Returns To Iowa In New Role: Front-Runner"