A major hog confinement company that’s notorious for their record on water and air pollution is putting $25,000 into the dark money agribusiness group that’s trying to swing the Secretary of Agriculture race to Mike Naig.

As Starting Line reported last week, the Iowa Farm Bureau organized a 527 organization named Iowans For Agriculture to raise and spend money from corporate entities to back Naig over Democrat Tim Gannon. The Farm Bureau solicited funds, promising that “a one-time investment of corporate funds for this cause will return dividends for a decade or more to come.” Iowa Select Farms, the state’s largest pork producer, is one of the three donors in the only public report available.

Iowa Select Farms has faced significant public criticism in recent years for their role in adding to Iowa’s water and air quality problem. They operate over 500 factory farms in Iowa, and have tried to greatly expand their hog confinement locations in recent years.

The company is also responsible for a number of manure spills over the past decade that have impacted Iowa’s waterways:

The Hansen family, which operates Iowa Select Farms, has contributed plenty of money to Republicans in Iowa in the past. Debra and Michael Hansen have combined for nearly $300,000 given to Kim Reynolds’ campaign.

But the company’s involvement in the Secretary of Agriculture race through this corporate-backed fund will raise new questions for whether Naig will be unduly influenced on water quality issues. As Starting Line reported, the Farm Bureau specifically mentioned “water quality” policy as one of the reasons to contribute to their effort.

In other news, Starting Line has obtained an additional email relating to the Iowans For Agriculture matter. Joel Brinkmeyer, the CEO of Agribusiness Association of Iowa, sent out an email on October 26 to their membership requesting funds to help boost Mike Naig through the 527 organization.

“It is critical that we have some consistency in agriculture to protect your agribusiness from undue regulations, additional taxes, or other changes that would disrupt your business,” Brinkmeyer wrote to AAI members.

AAI is a membership organization that provides advocacy, messaging and training help to over 1,100 businesses related in some way to agriculture in Iowa. In the letter, Brinkmeyer notes that the races for Governor and Secretary of Agriculture are extremely close.

After asking their members to donate to the Iowans For Agriculture organization, Agribusiness Association of Iowa warns, “If there is a change in this leadership, AAI’s efforts to support your business could change dramatically.”

They also explain that Iowans For Agriculture is looking for additional funding (presumably more than the initial $281,000 that is publicly available).

“This [Secretary of Agriculture] race appears to be dead even, with relatively low name recognition for either candidate,” the emails reads. “One-third of Iowa voters do not have a preference in this race. The Iowans for Agriculture have a goal of raising an additional $400,000 with which they firmly believe they can positively impact the outcome of this race. AAI supports this effort.”

As we noted in last week’s story, the Farm Bureau laid out in their memo how donors could keep their name out of the public record until after the election. As long as they donated to the cause after October 17, they could stay anonymous for now. AAI’s email was well past that date, so anything they raise from their members won’t be known until afterward.

It’s not entirely clear if Iowans For Agriculture has been successful on that front. There was $281,000 listed in their initial report ($250,000 of which came from Farm Bureau), as well as one $50,000 expenditure listed. That went to the Republican Governors Association in support of Kim Reynolds (which raises more campaign finance ethics questions considering the RGA sends money directly to Reynolds’ campaign).

However, as far as Starting Line can tell, Iowans For Agriculture has not made any new ad buys on TV at this point. So it’s unclear if any of these extra fundraising efforts have been successful. 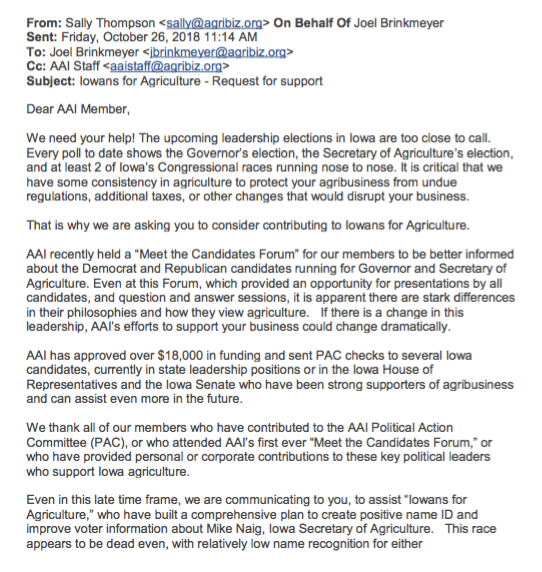 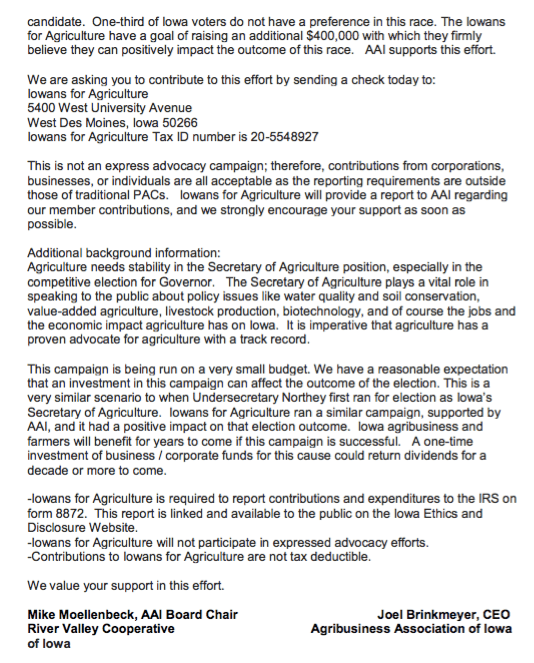