Starting Line has obtained a memo from the Iowa Farm Bureau that lays out their plan to use corporate donations from the agriculture industry to fund an independent expenditure group created solely to swing the Secretary of Agriculture race to Republican Mike Naig.

In the memo from Don Petersen, the Farm Bureau’s Director of Government Relations, the organization describes how “a one-time investment of corporate funds for this cause will return dividends for a decade or more to come.” They explain to potential donors that the race between Naig and Democratic farmer Tim Gannon is “dead even,” and that both candidates’ name ID is low.

To carry out an advertising campaign on TV, radio and digital, the Farm Bureau created a 527 political organization called Iowans For Agriculture. The 527 groups are named for a part of the tax code that allows for unlimited fundraising and spending from individuals and corporations.

In their solicitation of corporate funds, the Farm Bureau says they “have a reasonable expectation that an outside investment from Iowans For Agriculture in this campaign can affect the outcome of the election.” That, they note, can help ensure favorable policies to the agriculture industry on issues like water quality, livestock production and biotechnology.

The Iowans For Agriculture group has already placed over $220,000 in TV ads in the Cedar Rapids market for the final two weeks. Naig so far is only spending in the Des Moines media market.

As the Farm Bureau explains in the memo, statewide down-ballot races like the agriculture position don’t usually have big budgets for significant advertising blitzes. In last week’s campaign finance report, Naig reported having $219,156 cash on hand for the final weeks. Gannon had $263,318.

Both Naig and Gannon began running TV ads last week, though with smaller ad buys than the congressional and gubernatorial campaigns.

While contributions to this 527 organization will be publicly reported, the Farm Bureau hints in its memo how donors can avoid being named until after the election. The group lists October 20 as their preferred deadline for contributions, adding that October 26 will be the last day they can effectively purchase ads with any new funds. They also explain that any contributions after October 17 will not be included in the public report to the Iowa Ethics disclosure website until post-election.

The Farm Bureau, which has essentially become a political arm of the Republican Party in Iowa, notes that it “has committed significant resources” to this campaign already.

They also seem particularly concerned that Kim Reynolds could lose the race for governor, seeing the next Secretary of Agriculture as a potential firewall against a new Democratic agenda.

“Agriculture needs stability in the Iowa Sec of Ag position, especially with the competitive election for Iowa Governor,” the memo read. “The Iowa Secretary of Agriculture needs to counter any policy threats that may develop after the election or with changes in political leadership.”

This also wouldn’t be the first time the Farm Bureau has intervened like this in a Secretary of Agriculture race. In fact, their memo specifically refers to their past success in 2006.

That year, Republican Bill Northey and Democrat Denise O’Brien faced off for the open seat being vacated by Patty Judge. In the final weeks of the 2006 campaign, then-Farm Bureau President Craig Lang sent out a letter similar to this current one requesting funds from Farm Bureau members for a PAC that would attack O’Brien.

The plan worked. Although 2006 was a wave year for Democrats, Northey beat O’Brien by 51% to 49%. It was the only contested statewide race Democrats lost that year.

Still, Gannon has led Naig in fundraising this year and has been able to advertise far more than past Democratic contenders. He’s part of an unusually strong statewide Democratic ticket, and down-ballot races like his have gotten a little more attention than in years past. He also fits the more traditional profile of Iowa’s farming community than O’Brien, an activist on organic farming issues.

Both Gannon and Naig face off in a debate this morning. Gannon farms with his family in Mingo and worked in Tom Vilsack’s USDA. Naig is a former Monsanto lobbyist who is currently serving as the acting Secretary of Agriculture, appointed by Reynolds after Northey left for a position in the USDA. 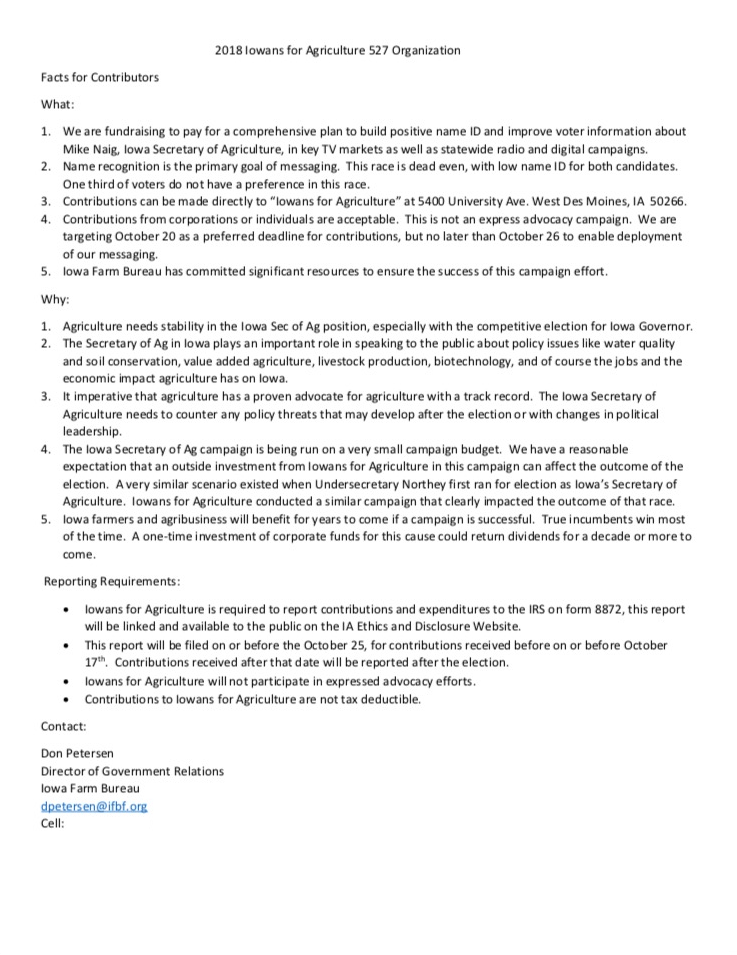