We have an early frontrunner for this year’s dumbest and most dishonest Iowa political ad. It comes to us courtesy of the Republican Party of Iowa, who have a 30-second ad up attacking Democratic 3rd Congressional District candidate Cindy Axne for being a “lobbyist.”

Now, this is one of those political hit jobs that can be “technically” true while it’s also wildly misleading. Yes, Axne registered as a lobbyist at the Iowa Statehouse for a single day-of-action event where she talked with legislators. For whom did she register with? The Iowa Voters For Companion Animals. She was at the Capitol to lobby for better treatment of dogs and puppies and against dangerous puppy mills.

Yes, seriously. The Republican Party of Iowa is attacking Axne for defending puppies. Here is their ad, full of scary music and sinister implications:

How exactly it’s a good idea to put Donald Trump, Elizabeth Warren and Beto O’Rourke (who apparently all Iowa voters know really well now?) all into the same ad to direct your anger at political candidate is confusing enough. Apparently Axne is a hypocrite because other Democrats elsewhere in the country are against lobbyists? Of course, I highly doubt Warren and O’Rourke were warning against the scourge of everyday citizens talking to their local legislators about the problems with puppy mills.

Axne responded on Facebook this afternoon to the ad.

“Well, they caught me,” Axne wrote. “I am registered with Iowa Voters for Companion Animals, a non-profit organization fighting for better treatment of puppies and dogs in Iowa’s puppy mills. When I learned that 10 of the nation’s 100 worst puppy mills are based right here in Iowa, I decided to do something about it. I joined the Iowa Voters for Companion Animals and registered in 2017 to join their day-of-action.”

The ad itself really does represent one of the worst aspects of today’s political culture. See, what Republicans are hoping they can do here is connect Axne with a word that most voters view as representing something bad – lobbying – and hope that no one does literally the slightest bit of research on it. They hope that there is absolutely no critical thought expended by anyone as they try to smear their political opponent with a charge that is completely laughable if you actually consider it. It’s one of those political ads where they say, “Well, we can’t get sued for saying this, so let’s do it.”

If you look online at Iowa’s lobbying database, Axne does come up in it. Once. For the Companion Animals organization. That’s it. She’s not in there for any other year or cause. 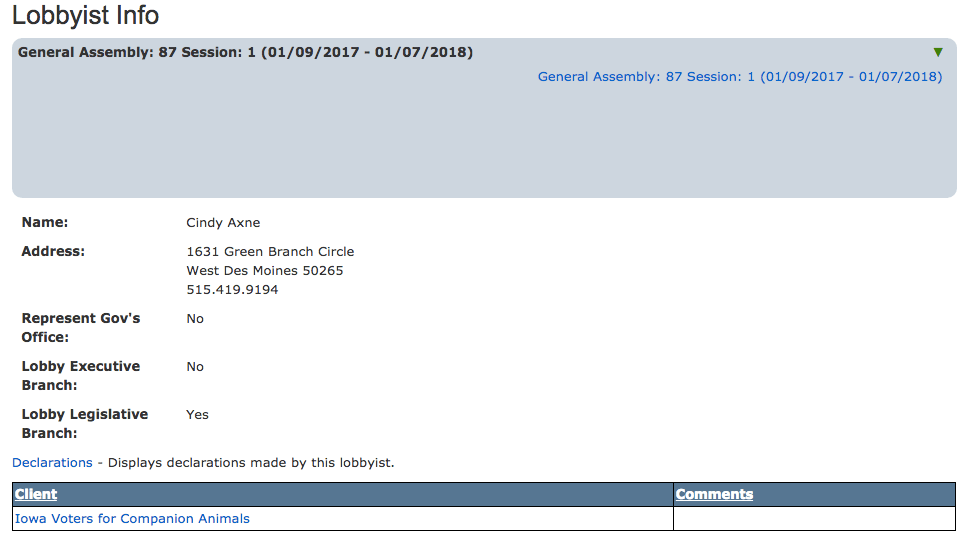 There is obviously a massive difference between what Axne was doing – engaging in a legislative day-of-action – and what some voters’ ideas of a full-time statehouse lobbyist is. She was not one of those people who are registered for multiple clients, the ones who typically work at a law firm or are lobbying on behalf of one major client. She was a concerned citizen. But Republicans hope you don’t pay attention enough to figure that out.

And, amazingly, it gets even worse. The ad encourages people to visit the Republican website where they can “learn the truth.” On it, they note that Axne once spoke out against members of Congress working for “special interests,” then says that “In 2017, Cindy Axne registered as a lobbyist (2), working to influence Iowa’s elected officials to vote in favor of her special interests.” Again, that special interest was puppies.

They also suggested that Axne, while a lobbyist in 2017 (again, not a lobbyist as most would understand it), “contributed money to candidates and party committees in Iowa to gain influence.” If you actually look up Axne’s contributions, you’ll find that this isn’t even technically true. She gave $100 to the Iowa Democratic Party on January 13, 2017, a few days after session began (and before the day-of-action on February 7, 2017). Her next contribution was for $50 to the Polk County Democrats in mid-May of that year, after the legislative session had adjourned.

If Axne truly was a lobbyist as Republicans are trying to spin it, she’s not a very good one. She didn’t give a dime to any actual legislators.

And again, you have to think about this here: there was actually a Republican staffer or consultant somewhere who created that ad and typed out those words for their website, knowing full well what they were saying was completely ridiculous and dishonest.

Republicans have already been lobbing a lot of dishonest attacks at Axne in her highly-competitive run against incumbent Congressman David Young, but it will be hard to top this one.