Iowa Senate Republicans launched their first wave of TV ads this Tuesday in six districts, five of which are pick-up targets for them. The move seems aimed at keeping Democrats on defense this year, despite Republicans already holding a 29 – 20 advantage in the Senate. Broadening that majority any further could keep the chamber in their hands for several campaign cycles, even if Fred Hubbell retakes the governor’s mansion.

Republicans may be the only ones on the air in many of the battleground senate districts depending on how much funds Senate Democrats have been able to raise. House Democrats also rolled out their first set of TV ads in key districts this week, which we covered in this earlier story.

Let’s take a look at each candidate’s ad, their messaging and how much they’re spending so far in this initial buy. Like with the House races, I only tracked down the ad buys for broadcast channels. Unlike the House races, Republicans bought their TV for two weeks at a time. So just divide each one by half to get a sense of their spending.

Republicans have high hopes of capturing Rita Hart’s Clinton-based senate seat now that Hart is on the statewide ticket. Patti Robinson stepped up for Democrats, but Republicans thought before that switch that Chris Cournoyer, a school board member and reserve sheriff’s deputy, was one of their strongest recruits of the cycle.

Cournoyer, an NRA-friendly candidate, explains that the Sandy Hook tragedy motivated her to do more on school safety; when her school board member didn’t respond to her questions, she ran for the office herself. She also gets in a mention of her firearms experience, but links it to helping people learn for their own personal protection, a clever way to not turn off folks from either side of the gun debate. She also gets in some of her experience with classroom science programs.

How many eye doctor puns can you fit into one 30-second ad? Mariannette Miller-Meeks, an ophthalmologist, tries to find out in her first ad for her race to hold onto Mark Chelgren’s district for Republicans. She suggests her “new perspective” on state government can “change the way we look” at healthcare coverage, telling voters that’s a “vision we can all embrace.”

Miller-Meeks hasn’t lost sight of her political ambitions after losing to Dave Loebsack in three separate congressional bids. Republicans envision her as a strong contender to keep this blue-collar seat, but they may be looking through rose-colored glasses this year. If you just quickly eyeballed the past presidential results, you might think Ottumwa has been lost to Republicans. But looking ahead to November, those trends may prove to be a brief optical illusion as Democrat Mary Stewart breaks voters from their blind loyalty to Donald Trump.

Since the Ottumwa media market is cheap, watch for Republicans to swamp the airwaves here (the ad buy reports for the Ottumwa stations are odd, so they may be spending much more than what I have at the moment).

Kevin Kinney may be one of the toughest Democratic incumbents to oust this year, but Republicans are giving it a good try with farmer Heather Hora. Her ad focuses heavily on rural imagery and messaging, introducing herself as a “farm mom.” Like many of the Democratic House challenger candidates did in their ads, she suggests Des Moines needs fewer “career politicians.”

Half the district is Washington and Keokuk counties, which vote strongly for Republicans. But the rest is rural Johnson County, as well as towns like North Liberty and Tiffin, which have all have become some of the best Democratic areas in the state. Perhaps Hora will surprise folks in November and get close to defeating Kinney, but regardless, ads here may force Democrats to spend a little bit more of their limited funds just to be safe in what should otherwise be a good matchup for them.

Shannon Latham introduces herself as the “conservative candidate” in this conservative-leaning seat that includes Mason City. Republicans have inundated Amanda Ragan with negative mailers for over a year now, and they’ll likely keep up the pressure on TV against a Democratic Party that may not have the funds to fully respond.

The Latham name is already well-known here, and the Republican challenger is quick to mention her relation to Latham Seeds. Latham quickly ticks off priorities of good schools, lower taxes, a strong economy and family farms in her 30 seconds. Her goal here is to keep rural voters from splitting their ticket in favor of Ragan, a very well-liked incumbent who works the district hard.

Few districts moved as far to the right in 2016 as Tod Bowman’s district, so Republicans would like to get a surprise win in this district that used to be reliably-Democratic. Bowman also hasn’t raised much money.

This ad is largely focused on the personal story of Carrie Koelker, a tourism director from Dyersville. She mentions growing up in a working family and losing her father at a young age. She also mentions her faith, just as Democratic House candidate Nancy Fett, who is running in the heavily-Catholic rural Dubuque County part of the senate district, did in hers.

There’s not a lot of policy pitches in many of these ads. Koelker quickly touches on lower taxes, technical training and good jobs.

This district is apparently cursed for Democrats this cycle as they’ve seen a revolving door of candidates in the past few months. Now an open seat that would have been completely safe with Senator Chaz Allen, popular Representative Zach Nunn is up with TV ads, but only a cable buy. He has no broadcast TV spots in the more-expensive Des Moines media market.

Nunn’s ad focuses on his military service, his family’s roots and his grandparent’s century farm. Nunn should win here in a walk, but Republicans are just doing their due-diligence to introduce him to the entire district.

This list is also notable for who’s not on here, including Roby Smith of Bettendorf. Even though Hillary Clinton narrowly won his Bettendorf-based district that is quickly trending Democratic, Republicans don’t see the need to prop him up here. The Democratic candidate has raised little money.

There’s also no initial ad buy for Rick Bertrand, who reversed course on his retirement plans and is running for reelection in Sioux City. His seat probably remains Democrats’ best pick-up opportunity, but the lack of ads here at first may be more due to Bertrand’s sometimes-strained relationship with the state party. Don’t be surprised if he buys his own advertising.

Finally, you may notice similar scenes in each ad. Like last cycle, Senate Republican candidates appear to have all gotten together for a joint video shoot, using the same rooms and extras. It’s not quite as blatant or distracting as last cycle’s shots with the same children in the same school hallway. I do, however, like to personally imagine that these are scenes of a real small business whose employees are confused by their meetings being led by constantly-changing bosses. 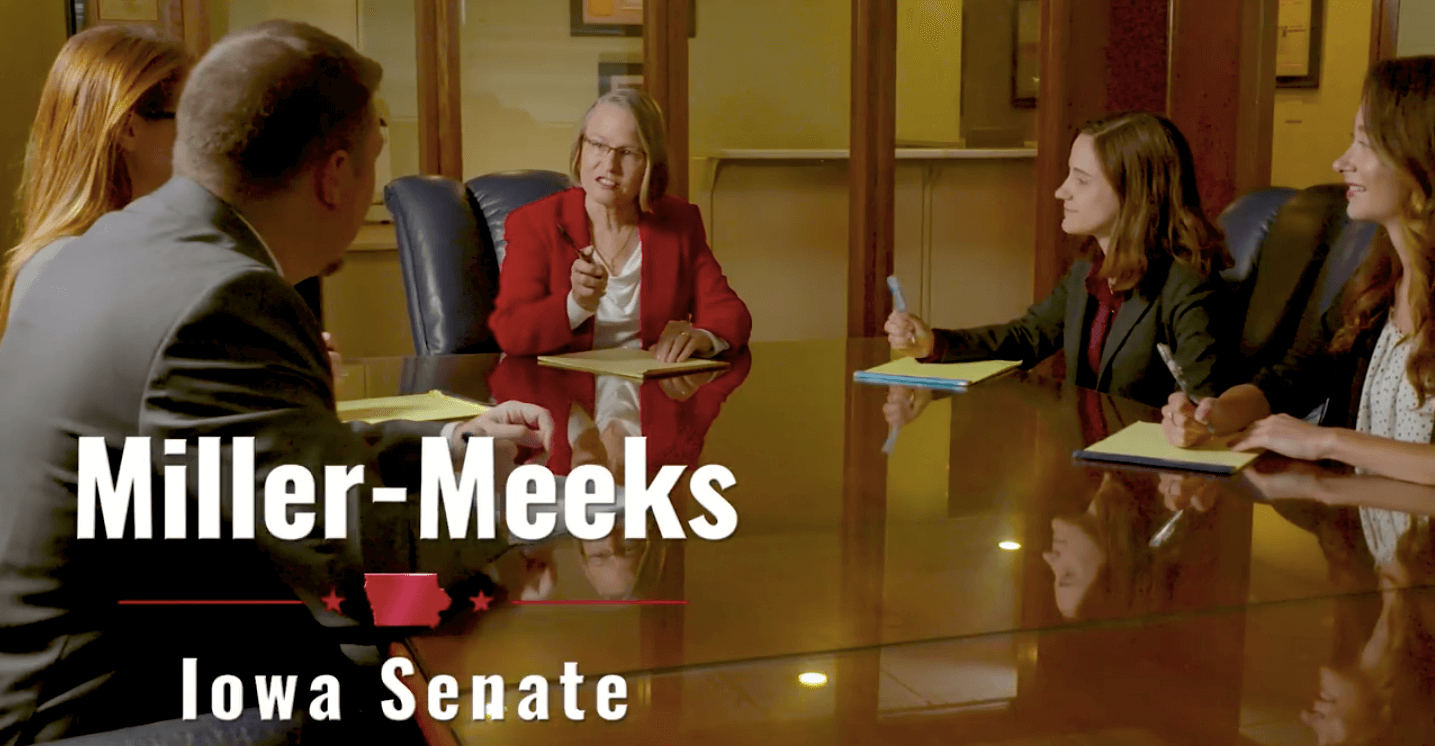 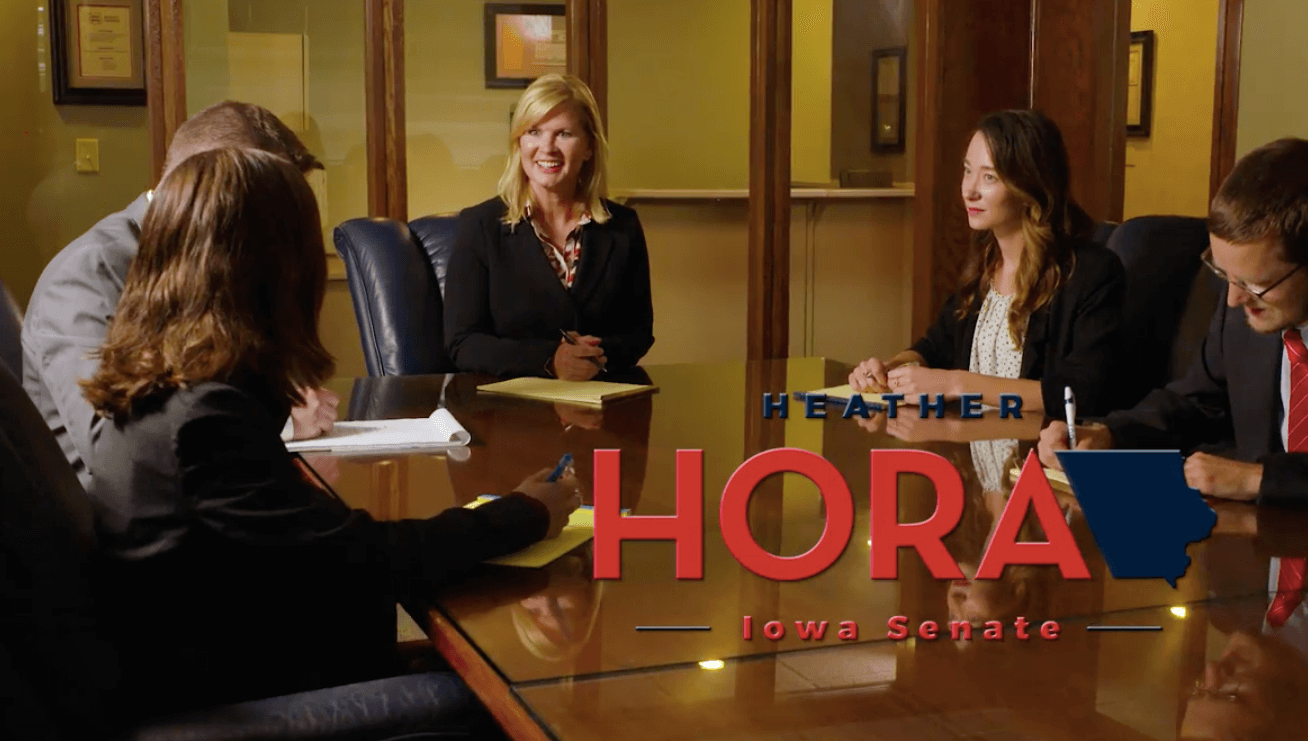 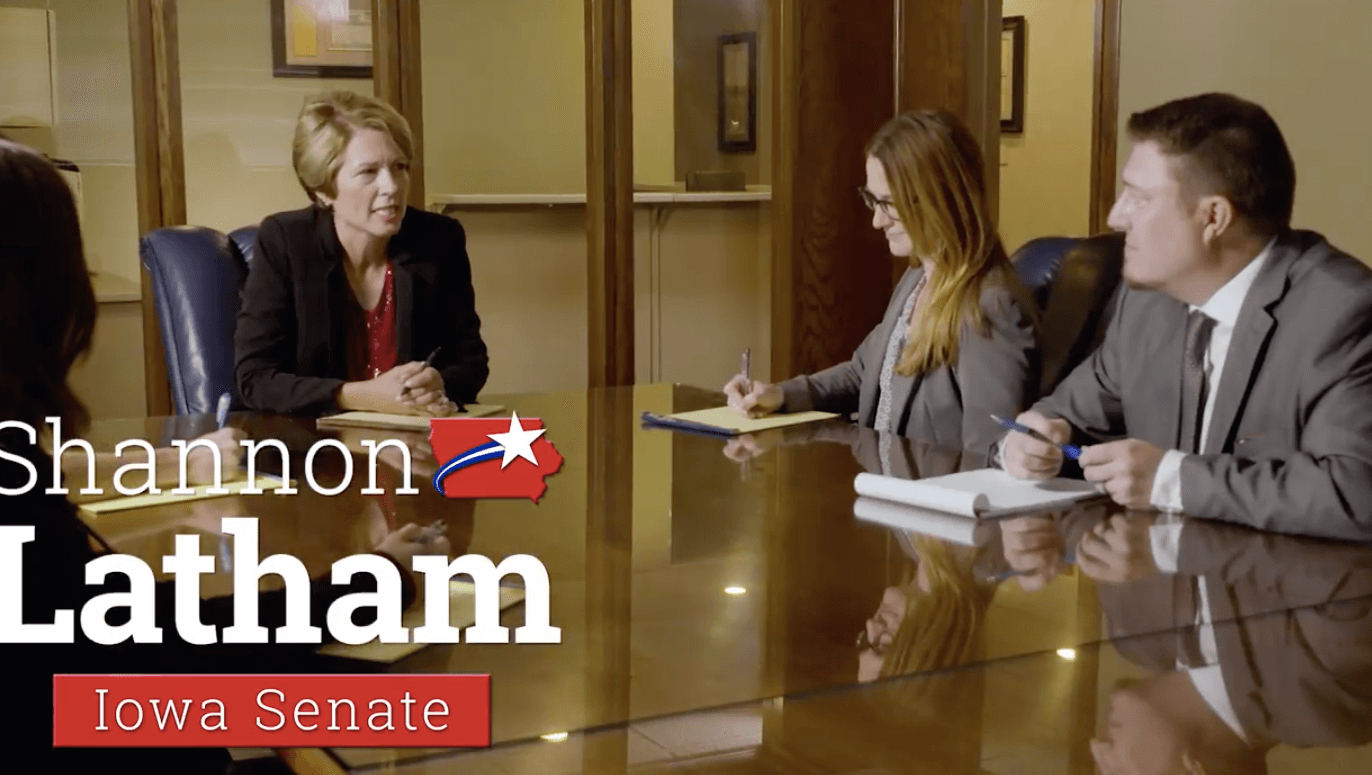 If you missed our post on the Democratic House TV ads, check that out here.