The $117 million in federal funding for the Cedar Rapids flood wall is not as was originally publicly promised, Starting Line has confirmed from multiple sources.

Last month, city leaders were informed by the U.S. Army Corps of Engineers that $41 million of the federal funding that was announced in July will instead be a low-interest loan that the city must repay over 30 years. That would present a significant increase in costs to the city to build the wall needed to prevent against future catastrophic floods.

Mayor Brad Hart and City Manager Jeff Pomeranz wrote to Congressman Rod Blum in early August about their “grave concern” that Cedar Rapids may not receive the full $117 million. Cedar Rapids already faces a $342 million gap in funds for the $750 million required to complete the project over 20 years, which could fall on local taxpayers’ shoulders to fund if they can’t find the money elsewhere.

The city leaders told Blum that getting the full $117 million as a grant is “inherent and critical to this project’s completion and success.” 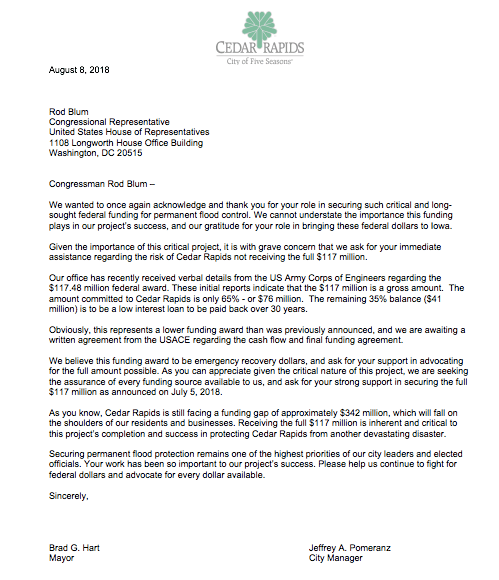 There was considerable fanfare from local and federal elected officials in Iowa after the announcement of the federal government’s funding pledge. Cedar Rapids has been working for ten years since the historic 2008 flood to obtain financial assistance to complete their new flood wall. Several prominent Republican officials, including Congressman Rod Blum and Senators Joni Ernst and Chuck Grassley took some victory laps over the $117 million.

.@RepRodBlum, @SenJoniErnst, and @ChuckGrassley didn’t rest until Cedar Rapids was given the funding it needs for a flood wall.

Vice President Mike Pence visited Cedar Rapids shortly after the July 5 announcement of funding, publicly thanking Blum for his leadership in the effort.

Cedar Rapids threw a “Flood Control Thank You Celebration” for Blum, Ernst and Grassley on August 8. City officials, however, learned of the $41 million loan change just before the event, sending the urgent letter to Blum’s office on the same day as the celebration.

Starting Line’s sources say that lobbying efforts continue behind the scenes to push the federal government to get the $117 million back to a full grant status. An initial story from the Gazette noted that Grassley’s office broke the funding down to $76 million in federal costs and $41 million in non-federal costs, but those involved in the discussions tell Starting Line that it was fully understood by the city at the time of the announcement that all the $117 million was to be provided to Cedar Rapids without some sort of loan agreement.

The timing on the new information may be important in Blum’s case, considering he sent out mailers from his congressional office, which some residents received on August 13 according to a Bleeding Heartland reader, touting his success in securing “$117 million from the federal government.”

The issue of flood protection is a pressing one once again for Cedar Rapids as the past week’s significant rainfall has prompted the city to erect some temporary flood barriers once again.

So far, the city has committed $110 million to the flood wall, $10 million of which has already been invested. $267 million has been provided by the state. $10 million in grants were already approved by the federal government. The county has yet to pitch in its own funding. If the $117 million comes in from federal sources in full, the city will still to need to to raise about $342 million.

Requests for comment from Cedar Rapids’ mayor, city manager, Congressman Blum and Senator Ernst’s offices were not responded to.