Montana Governor Steve Bullock joked that he wouldn’t talk about his Iowa ties at his meet-and-greet in Coralville this weekend, but those local connections showed up all the same. Barbara Smith, Bullock’s second cousin that lives in Iowa City, heard through the family grapevine that the governor would be in town and came out to meet him for the first time.

Bullock was on a two-day swing through Iowa to help out down-ballot Democrats. He headlined a fundraiser for House Democrats in Dubuque, for Rob Sand in Decorah and held local meetings with Democratic activists in Davenport, Coralville and Cedar Rapids. It’s his second trip to Iowa this year, and many believe he’s testing the waters for a potential 2020 presidential run.

About two dozen people came out to the Coralville event at Backpocket Brewing organized by Senator Bob and Sue Dvorsky, including Bullock’s cousin.

“Are you on the Clark on the Wall side?” Bullock asked Smith upon meeting her. “Cause I hear the Wall side is Republican.”

No, Smith insisted, most Walls are Democrats. She showed the governor photos of the family’s old store in Iowa on her flip phone and they chatted about family members they both knew. Bullock’s mother (Smith’s cousin) had gotten in touch with Smith about the event through a phone tree that involved several Barbaras.

Iowa Attorney General Tom Miller joined Bullock on his trip, just as he did for the governor’s earlier visit to Polk County a few months back. Bullock served as Montana’s attorney general before becoming governor, and he worked with Miller on several issues. 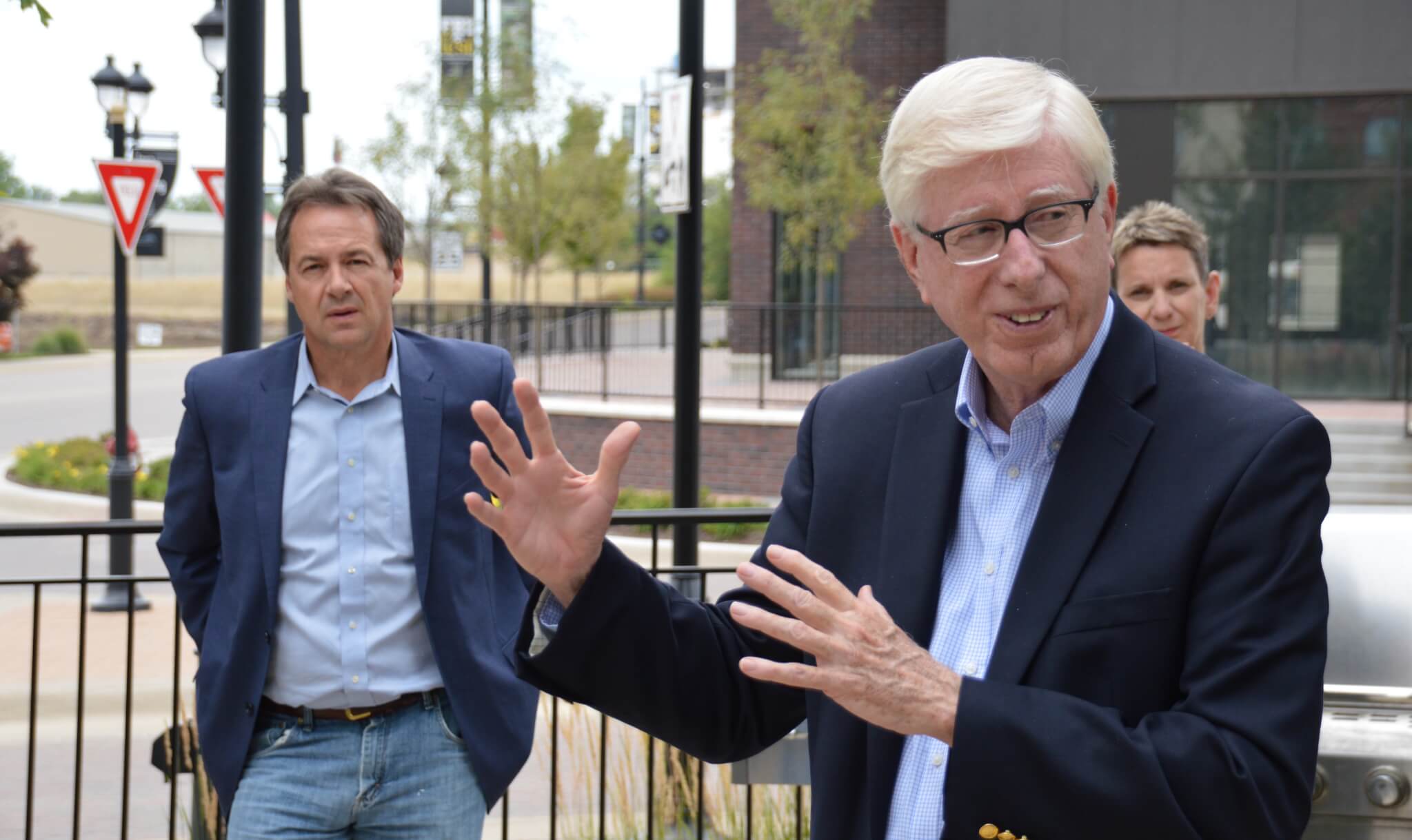 “He has a quality that is missing in Washington and that’s the ability to relate,” Miller told the crowd in his introduction of Bullock.

Bullock focused his short pitch to the activists about how the party can reach back out to voters they lost in recent years.

“Donald Trump won Montana by 20 points. I won by 4 percent,” he explained. “There’s often an inclination among Democrats to say, ‘What’s wrong with those voters?’ as opposed to saying, ‘What did we not talk to them about? How did we not reach them along the way?'”

He noted that even in conservative Montana, he was able to pass a slate of Democratic legislative priorities by building up consensus around the state. That led to accomplishments on Medicaid expansion, an earned income tax credit bill, record investments in education, freezing college tuition and new funding for pre-school, he said.

“There is a lot to be against right now, and I think we can be against a lot of those things, especially at the state level,” Bullock said and recalled his executive order on net neutrality in Montana. “But it’s not enough just to be against Trump … We’re a party of everyone. We’re not just a party of the coasts. We need to talk to people everywhere we are. We have to fight for things. We have to show up. We have to share some values.” 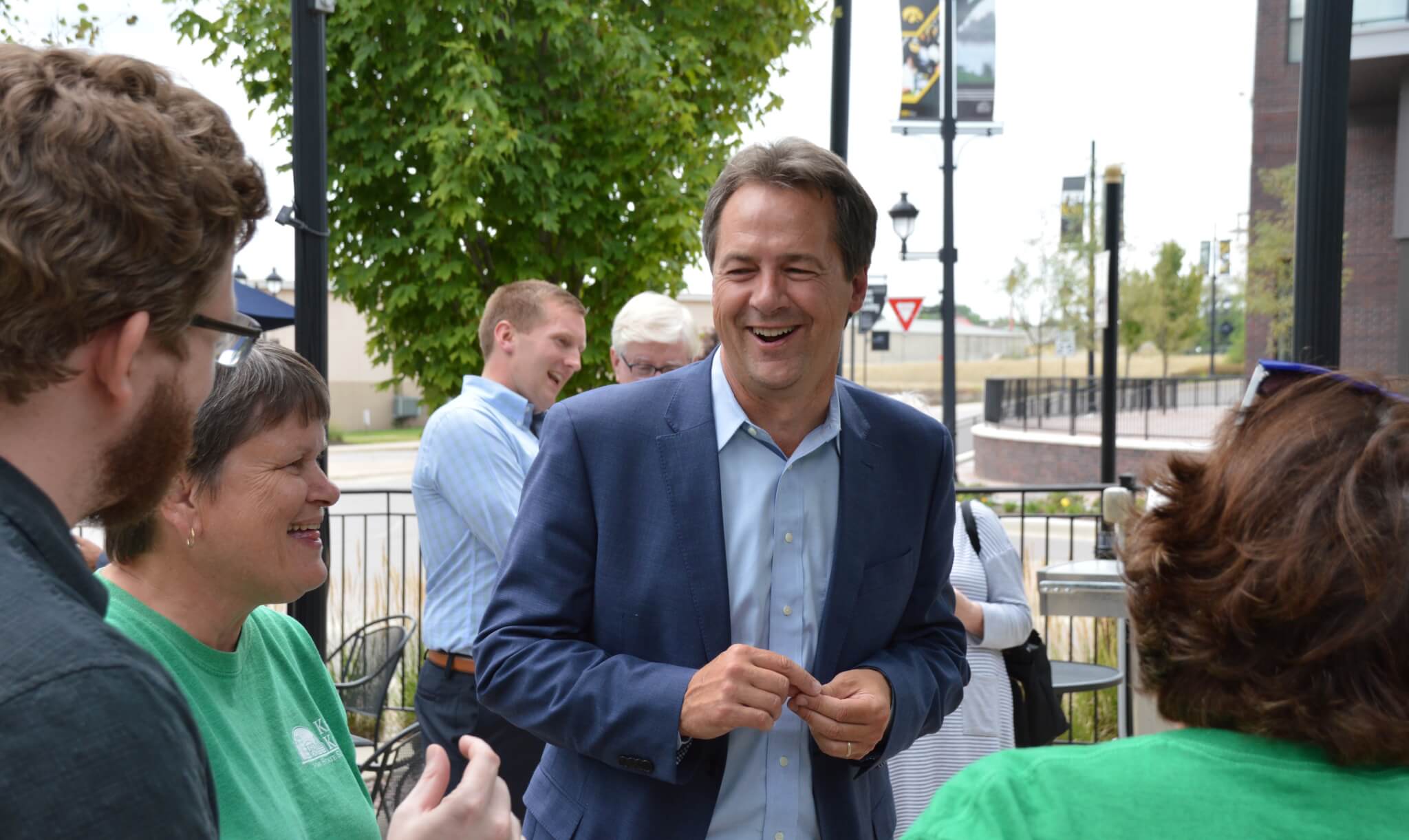 A few former Montanans also came out to see Bullock. A younger graduate of Bullock’s same high school showed up, as did Lee Ann Logan and her family. Logan lived in Montana all her life before moving to Iowa a few years ago, and talked about how Bullock had involved her in an effort to fight prescription drug abuse.

Those connections and meeting with local Democratic activists are exactly the type of relationships these trips by possible White House hopefuls are designed to cultivate early on. And helping out local campaigns can build up favors for the future.

If Bullock does end up competing in the caucus, he’ll have some good local validators for his run, from the attorney general to extended family members.

“He looks like a Clark,” Smith said of her second cousin. “He looks like a relative. I was very impressed. I think his Iowa roots showed up in him. He’s a fine young man.”

“I will send that to my friends, they will be so impressed,” Smith said after taking her picture with Bullock. “Then when you’re president some day, I can tell them I knew you.”