Democrats have a good opportunity at retaking the Iowa House in the 2018 elections, but which candidates get the party’s nomination in competitive primaries could prove a key factor. There are a lot more legislative primaries than usual this year – 25 in all for the House. Part of that is due to all the retirements from Republican legislators (as well as a few Democrats). Part of it is thanks to newfound enthusiasm from both parties’ base.

Democrats have a dozen primary contests, two of which are for open safe Democratic seats. I have a good handle on the dynamics of most of the Democratic contests to cover them now. I’ll wait until after the fundraising filing in mid-May to write up the Republican ones. You can click on any of the district maps below to bring up a larger size. This is the big one. With Abby Finkenauer leaving her deeply-Democratic seat to run for Congress, whoever wins this primary will certainly be a state legislator next year. And as Finkenauer showed (and Pat Murphy before her), this Dubuque-area seat can be a jumping off point for higher ambitions.

Two candidates – Brad Cavanagh and Lindsay James – got into the race early on last year and are relatively younger legislative candidates. Both raised significant funds by the January filing deadline (James brought in $34,101 and Cavanagh had $13,089). James has apparently kept up her impressive fundraising – she’s reserved TV air time in the Cedar Rapids/Dubuque media market for the final weeks (very rare for a legislative primary).

The race is more complicated than this, but here’s the general view of the primary: James has a lot of enthusiasm and support from progressive activists and Democratic leaders in town, as well as the fundraising strength for a major campaign. But Cavanagh and his family have deeper community ties throughout Dubuque and will have the funds he needs to compete. Both have their strengths and appeals.

Pat Cullen, a younger candidate who runs a tutoring business, got into the race this year. If his name seems familiar, it’s because his family goes back to the Storm Lake Cullens.

Both Cavanagh and James are viewed very favorably by local Democrats. The loser of the primary may get another shot at the Legislature soon enough. Senator Pam Jochum has spoken about letting the next generation of leaders step up, and she may not run for many (or any) more terms in the Iowa Senate (or she could get picked as a lt. governor running mate this year), opening up the Dubuque senate seat. Keep an eye on both these candidates for the future regardless of who wins in 2018. 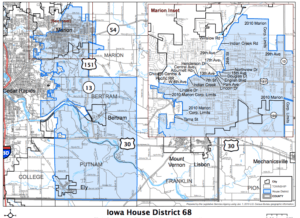 This Cedar Rapids suburb seat is one of Democrats’ top pick-up prospects for 2018. Hillary Clinton won this district by 4 points and it’s trending Democratic. Two Democrats are facing off in a very competitive and hard-fought primary here – both candidates got in the race early on last year.

Molly Donahue ran against Rizer in 2016, but came up short by nine points. She’s worked as a teacher for nearly three decades, giving her lots of connections to local families. Scott Foens is an Air Force veteran, worked at NORAD, is a former paramedic and now works for the city of Cedar Rapids. He lives in Marion.

Neither Democrat raised a whole lot of money in 2017. Donahue brought in $8,496 and Foens raised $3,896. We’ll see in a few weeks what the new finance reports show, but either will face a very expensive race in the general election.

There are several primaries in this list where the 2016 candidate is running again, as Donahue is here. The conventional thinking is that previous candidates will have an advantage in the primary simply because they’ve already built volunteer networks and sent out paid communications before. Others point to their inability to win the first time, but many will argue that 2016 was an anomaly with Trump’s wave. Either way, I would give a slight advantage to previous candidates, especially if it’s a woman in a very female-friendly year among Democrats. 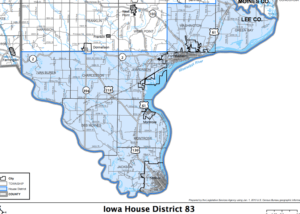 While Democrats have held this Lee County-based seat for decades, it’s also a region of the state that swung hard for Trump in 2016 – and it’s not entirely clear if it’s returned to form yet. Republicans seem to have a candidate with a strong profile in Jeffrey Reichman, a Marine and small business owner. So, whichever candidate wins the primary may have a competitive race ahead to hold onto this seat for Democrats.

Jeff Kurtz is the candidate that most of the local unions have lined up for, important in a labor-heavy district. Kurtz is a retired railroad worker (his campaign slogan is “Get Iowa Back On Track,” complete with a fun train graphic). He’s the president of the local Brotherhood of Locomotive Engineers and Trainmen.

Bob Morawitz recently won election to the Fort Madison City Council, and has long been involved in the IBEW electrical workers union. He ran unsuccessfully in the Democratic primary for state senate that Rich Taylor ended up winning in 2012. Michael Hardy is a non-profit worker and progressive activist from Keokuk. 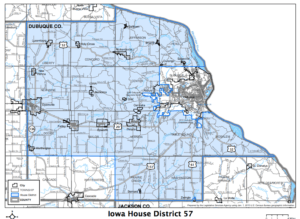 This was one of just two seats that House Democrats lost in 2016 and would very much like to take back. Shannon Lundgren will face significant statewide scrutiny after her role in successfully leading the fetal heartbeat bill in the House. Leo Gansen is from Epworth and works as a correctional officer at the Anamosa State Penitentiary. He’s on AFSCME Council 61’s executive board. Gansen has lived in rural Dubuque County his whole life and has deep community connections with local churches and football organizations.

Nancy Fett is from Peosta and teaches social work at Loras College in Dubuque. She’s also very involved in local community organizations, including serving on the board of directors for Catholic Charities – helpful in a heavily-Catholic district.

Both candidates have professional-looking campaigns and appear to be working the district hard before the primary. This should be a good one to watch. 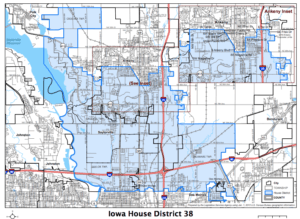 Democrats would love to see a suburban seat like this continue to move away from Republicans, though it didn’t do so as much as hoped in 2016. Heather Matson is looking for a rematch with Republican Kevin Koester. She was a strong fundraiser in 2016 and should have the funds if she thinks the primary gets close. Matson, who has a long career in public policy and campaigns, lives in Ankeny, where the bulk of the district is.

Reyma McCoy McDeid is the executive director of Central Iowa Center For Independent Living, an organization that helps people with disabilities to live on their own. She has a rather larger social media following in Iowa Democratic circles and has gotten a couple endorsements in the race from Iowa Women for Progressive Change and the Asian & Latino Coalition. 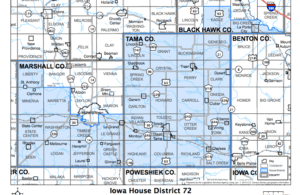 Some political watchers were surprised that HD 72 and HD 75 drew such large primary fields for Democrats. Both districts are Republican-leaning, rural, Central Iowa districts that will be tough to flip in 2018. But that just speaks to the enthusiasm from Democrats that so many are willing to take on these difficult seats.

Mindy Benson of Tama is seen as a strong candidate here. She’s the director of Tama County Emergency Management and a 911 dispatcher. Benson will likely get some campaign help from the Teamsters. She’s also a foster mother.

David Degner of Clutier is a veteran and teaches trucking at Black Hawk Community College and drives a fuel truck part-time. Joycelyn George of Traer is a retired art teacher. 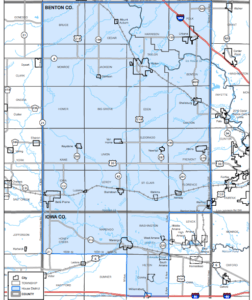 A retirement makes things a bit easier in this Republican-leaning rural seat, but it’ll still be an uphill climb for Democrats to win in November. Two Democratic candidates from 2016 are on the primary ballot: Paula Denison was the candidate for HD 75 last year; Dennis Mathahs was the nominee for the senate district. And even Doris Guliford, a UAW member, is a past candidate – she ran against Pat Grassley for two cycles (she was Doris Fritz then). Another open seat in a mostly-rural area. Ann Fields looks like a candidate who give the Republicans a run for their money. She’s a former farmer who became the first female president of William Penn University. She lives just outside of Knoxville and was a board member for Iowa’s Family Planning Council. Zachary Pendroy is a younger candidate in his 20’s who lives and works on his family’s farm in northern Marion County, as well as working in human resources in Des Moines. 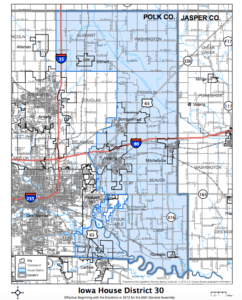 Local Democrats hope to improve their standing in Altoona and get Zach Nunn, a rising start in the Republican Party, back on the target list. Kent Balduchi should win the primary – he’s an attorney and former firefighter who is very involved in the community and local sports teams. Most Democrats haven’t forgiven Dan Nieland for running as an independent against incumbent Geri Huser in 2010 when Republican Kim Pearson narrowly won. 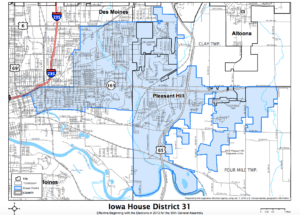 Incumbent Democrat Rick Olson faces an interesting primary challenge from Tiffany Allison. She’s a domestic abuse survivor who has used her personal experience to advocate for changes in Iowa laws. She’s gotten some extra exposure this year through the work that the Marsy’s Law group has done up at the Statehouse. There’s already quite a few yard signs out in East Des Moines for both Olson and Allison, so keep an eye on this race. Democratic legislative incumbents pretty much never get defeated in primaries, but you never know. 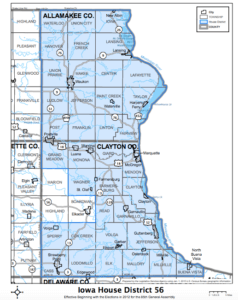 This Northeast Iowa district that Patti Ruff used to represent should be a top target for Democrats to recapture. Republicans amazingly didn’t recruit a candidate here by the filing deadline, though they can still nominate someone later through a special convention. Lori Egan, a nurse from Waukon who’s active with local school sports and volunteer groups, will win this primary and should make this a key battleground race for control of the Iowa House. 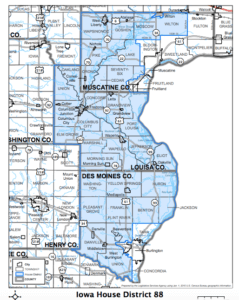 There was a strong Democratic candidate here in 2016, but he didn’t come too close in a year where rural counties along the Mississippi River went dark red. Democrats have tried to recruit Lanny Hillyard for years for a legislative run. From Mediapolis, Hillyard grew up on a family farm and recently retired from his job at Purina. He has deep roots throughout the community, and serves on the board of Southeastern Community College. Noah Canady, who is 20 years old, is the chair of the Louisa County Democrats and comes from a working class family. [Update: Canady announced he is withdrawing from the race.]