Many Iowa politicos are watching this race closely after Democrats surprised by keeping a heavily-Republican district close in a senate special election last month. HD 6 was won by Donald Trump by 30 points, but Democrats narrowly carried this half of the senate district in that race.

Carlin, the former HD 6 state representative who won the senate special election, spent just $1,976.51 to win, with no in-kind help from the party. He also under-performed Trump’s margin in the district by 32 points.

Compare the Republicans’ spending to the finance reports in these Starting Line stories from last year’s legislative races. Only about a dozen house races surpassed the $100,000 spending mark from either party. Republicans shouldn’t have much problem raising a lot of money for 2018, but dumping $117,000 into a Trump +30 district now takes some TV ads and mailers off the board for a swing district come this November.

Democrats are excited about the possibility of a massive upset in a deep-red Western Iowa legislative district, but they’re still realistic about their chances. DeJong’s finance report showed she’s received $1,000 in-kind from the Democratic Party for digital ads and about $7,700 for mailers. Staffers from the House Democrats campaign arm is also on the ground to help.

DeJong raised just under $13,000 herself for the quick, three-week campaign. She brought in a decent amount of money from Sioux City donors, but she also got hundreds of small-dolor donations from around the state and country. National volunteers with the Democratic Postcards For Voters group has pitched in with help, too.

Republicans have used their funds on some generic, positive TV ads in support of Bossman. In the mail, they’ve gone sharply negative against DeJong. One of their first pieces tied her to national Democrats, seemingly solely on the fact that DeJong is a Democrat herself. 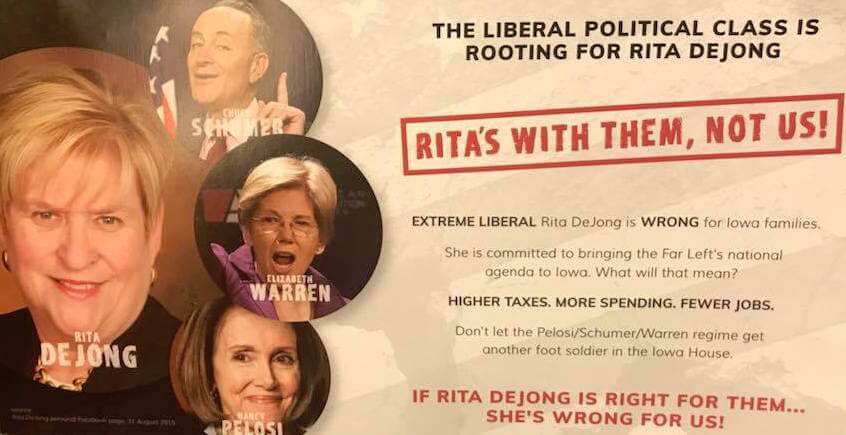 A recent mailer focused in on a single story that DeJong shared on Facebook, one in which Barack Obama talked about how Republicans’ knee-jerk reactions to his presidency helped create an environment for Trump to take over their party. 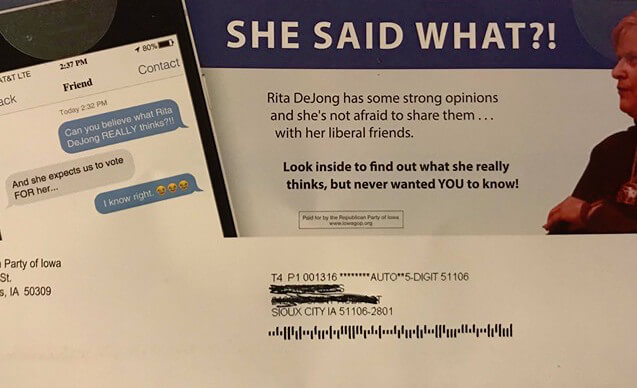 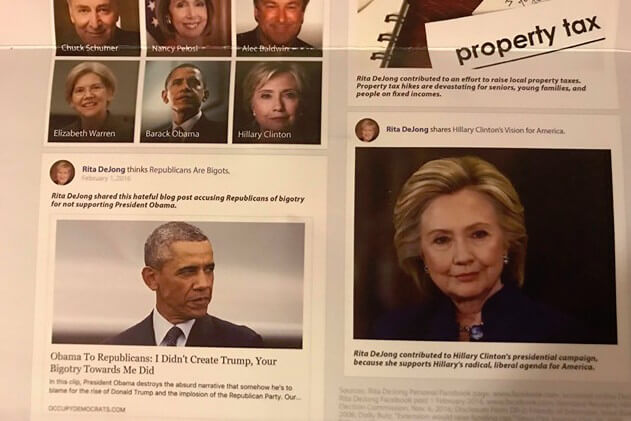 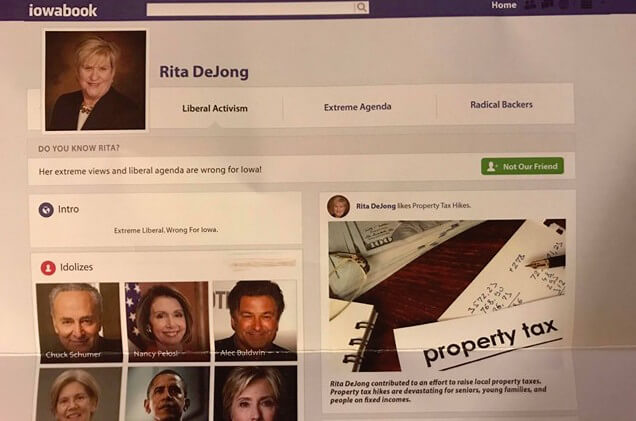 Even though it’s a heavily-Republican district, Bossman still needs to whip up the GOP base there to ensure they’ll turn out for a special election on a day where the temperature is expected to reach a high of six degrees. Democrats remain highly motivated following last year’s legislative session and the ongoing scandals of the Trump Administration, evidenced by the impressive improvements over 2016 election numbers for Democrats in the past year’s special elections

But Republicans’ recent mailer serves as an useful reminder for candidates of both parties for any office how a single, seemingly-benign post on social media can be distorted into a full attack ad. It’s certainly not the strongest or most-effective ad in an Iowa race, as plenty of voters that aren’t hardcore Republican partisans should be able to see through the silliness of the claim. But if enough Trump supporters in the district come to see DeJong as an extension of the national Democrats they despise, it may be enough to get them out to the polls. The same tactics may not be as effective for Republicans in the more traditional swing districts for the general election in 2018.

You can view both candidates’ most recent report here and their earlier ones here.