A large, enthusiastic crowd of Democratic activists and donors turned out last night for the Iowa Democratic Party’s Hall of Fame Dinner in Des Moines, offering up at least one sign that the party faithful remains energized seven months into the Trump era. While high-stakes votes were being held in the U.S. Senate on the repeal of Obamacare (which ultimately failed), Iowa Democrats heard from their gubernatorial candidates looking to take on Governor Kim Reynolds next fall.

The evening was the first opportunity for the IDP to showcase its new leadership in Troy Price, who was elected as the new chair this past Saturday. Interim chair Andrea Phillips had stepped in after Derek Eadon’s departure and is largely credited with quickly ensuring that the Hall of Fame Dinner was a success. Price, who was humorously welcomed on stage to “The Price Is Right” theme music, took the chance to tout the party’s prospects heading into 2018.

“Six months ago, people were writing the obituary of the Democratic Party in Iowa,” Price said. “Well tonight, all of us in this room are here to say with one voice that the Democratic Party is not going anywhere, we are going to get to work and we are going to win in 2018 … Everyplace I’ve went, I’ve seen – first-hand – excited Democrats who are looking for new and innovating ways to move our party forward.”

All seven gubernatorial campaigns were present at the event, one of the first big moments where each had a chance to impress the party’s activist and donor base.

The Boulton and Hubbell campaigns came to play, making sure their support was very visible at the event. The Glasson supporters had a sizable presence as well, waving bright yellow signs during her speech and clip-boarding the area outside the main room. Boulton’s group held a rally of several dozen backers before the event began, chanting and making noise with Boulton-logoed thunder sticks. The hallway into Veterans Auditorium featured short video clips of Boulton projected onto the walls, an imposing image that was a new trick for visibility efforts. Hubbell’s crew had around a hundred people in green shirts that read “Corn Fed, Iowa Bred, Voting For Fred.” 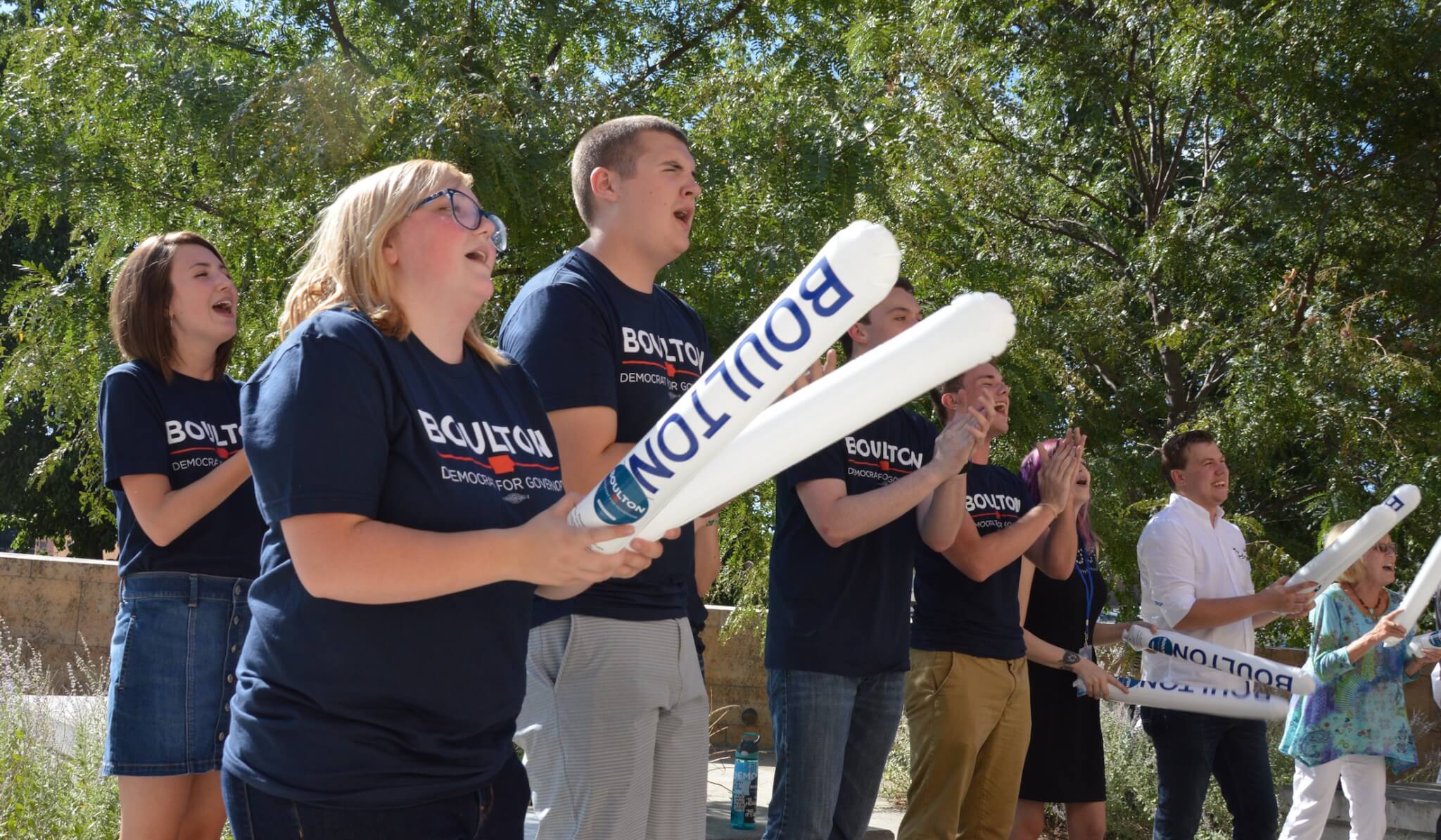 Campaigns often engage in the “sign wars” aspect of multi-candidate dinners like these, using it as a way to show off some organizational muscle. In the end it probably doesn’t move any votes or raise any money, but it’s a fun morale-boosting effort for supporters of the candidates (and the candidates themselves). It also helps demonstrate which operations are organized enough to pull off such feats. Hubbell and Boulton had ten tables apiece at the dinner and Glasson appeared to have four or five. Those three campaigns also seem to have the most staffers on payroll early on, which helps in turning out bodies.

Other campaigns had one or two tables of their own, but were happy to just treat the event as a major speech for their candidate.

As for the speeches, most of the candidates stuck to variations of their stump speech. Andy McGuire was one of the only ones to address current events by defending transgender rights (it was surprising more didn’t concerning everything happening in Iowa and national politics this week).

“With what happened this week with Donald Trump tweeting about transgender, I just want to start off tonight by saying, I hope we’re all allies,” McGuire began.

“As a doctor and a woman and a mother of five daughters, I’m a strong supporter of Planned Parenthood,” she added later on. “That’s why the first day I’m in office I will restore funding to Planned Parenthood.”

The evening was Fred Hubbell’s first major speech to a large crowd. He stuck with a mostly introductory address, highlighting his experience both in business and in running Iowa government agencies and projects. He joked that he’s used to being in the audience for major Democratic fundraisers instead of up on stage. And Hubbell related some stories he’d heard from Iowans during his announcement tour last week.

“I had a student up at UNI who told me she has to work four jobs just to pay tuition,” Hubbell recalled. “I had a teacher here in Des Moines who said she struggles to accomplish what she wants as a teacher because so many kids in her class come to school with empty stomaches. There was a father up in Northwest Iowa whose son lost his favorite teacher because he moved to Minnesota for better pay and better bargaining rights … I can’t sit on the sidelines any longer and let this continue.”

Cathy Glasson gave an amped-up, policy-heavy speech that drew cheers and applause from her tables and some others.

“The insiders, the CEOs, the billionaires. For too long, it’s been their time. But now, it’s our time,” she began. “I’m tired of working people in this state getting beat up. Tonight it’s time to send a message to the corporate lobbyists who pull the Republican strings. To the bosses and billionaires who have been dictating the agenda in Des Moines for too long. Your days of controlling our state are numbered. It’s our time! We need a bold, progressive movement to win back Iowa.”

Glasson also pointed out several audience members who had come with her that evening that had been involved in grassroots efforts to raise wages or secure better healthcare options.

Nate Boulton hit upon many of his themes of fighting the Branstad/Reynolds administrations at the Statehouse and through his legal work, as well as laying out a positive vision for the party in 2018. “While they hand out corporate coupons, we’ll market to Iowa’s strength: making sure that we have that skilled, reliable workforce ready to meet the challenges of the changing economy, and where every worker is worth $15/hour,” Boulton said. “Think about what it means for Iowa’s future if we fully fund education, treat teachers like the professionals they are, make sure they are valued in our classroom so we can create the next generation of teachers.”

John Norris hit populist themes as well throughout his speech, casting the gubernatorial race in 2018 as part of a larger movement to reorder where power lies in government.

“We must inspire and organize around our values-based agenda and contest for power,” he said. “Contest for power with the wealthy special interests and corporate lobbyists that control our politics today … I think [Kim Reynolds] is more interested in being first on the Koch Brothers’ Christmas list than Iowa being first in education.” 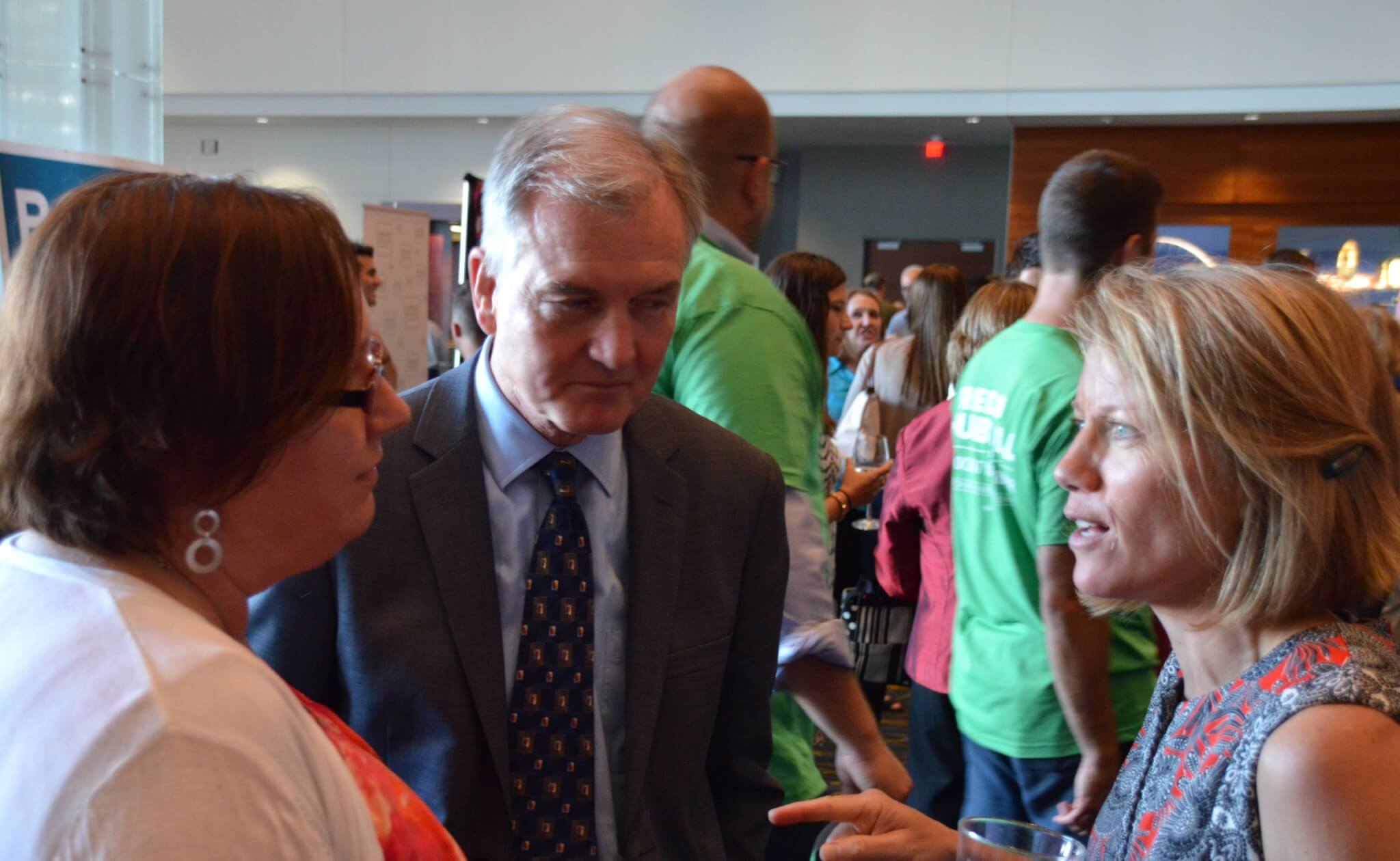 Norris also appeared to take one of the only shots at a fellow candidate that night in a not-too-subtle criticism of Hubbell’s recent announcement that he’d already raised $1 million.

“Politicians who flaunt the influence of money and tout the size of campaign war chests are out of touch with Iowans,” Norris said. “We must fight against the grip that money has on our politics and our government today. Ours is a fight for the people.”

Jon Neiderbach recalled a conversation he’d had with a voter during a campaign trip who had asked him, “Are you for money or are you for me?” He noted that many voters still aren’t sure where the Democratic Party is on that measure, and called for a broad restructuring of Iowa politics.

But the speaker who appeared to stand out the most from the night was the one who was filling in for a gubernatorial candidate. Todd Prichard is in Bulgaria for several weeks serving in the Army Reserves, so his wife Ann took the stage on his behalf.

“I’m Ann Prichard and I’m running for governor!” she joked at the start, a nod to the Democrats’ ever-expanding field.

Prichard told personal stories of her husband and her family, and explained the difficulties she’s seen as a teacher in Northern Iowa.

“I teach in a district where over 50% of the students qualify for free and reduced lunch, and I wonder: when school is cancelled because of bad weather, do they have food at home?” she said.

By not attempting to give a soaring, gubernatorial-like speech, Prichard ended up coming off as authentic and genuine, giving off a bit of Christie Vilsack vibe at times. The rest of the evening was spent honoring Democratic volunteers and leaders who had stood out in their service to the party in recent years. State Senator Matt McCoy, the night’s “Outstanding Elected Official,” spoke about the continuing danger to children that DHS cuts were causing.

Although there was no big-name headliner for the event, it wasn’t really noticeable. The event ended on time and seemed overall as a solid first event for the new IDP team.