That could easily be the slogan for Cathy Glasson’s campaign for governor in 2018, as she said at one point in an interview with Starting Line that “Iowans want to see something different.” She believes Iowans will find just that in her candidacy, where she’s pitching what she calls a “bold, progressive vision” for Iowa’s future.

After kicking off her bid last week, Glasson has hit the Democratic Party county event circuit, putting in some long hours traveling the state. She’s used to it having worked as a nurse for over two decades, where 12-hour shifts are the norm. Glasson worked at the University of Iowa Hospital and Clinics, where she was instrumental in unionizing the healthcare workers back in 1998.

Her push for healthcare reform within her union, particularly during the 2004 caucus, was a major part of changing the national dialogue on affordability and access, leading in part to Barack Obama’s Affordable Care Act.

Now she’s taking that history of issue advocacy and professional work experience to the Democrats’ gubernatorial primary. Starting Line spoke with her shortly after her kick-off last week.

Glasson spent her childhood in the Northwest Iowa town of Spencer, where her father was a truck driver and her mother worked at a Sears and Robuck store. At the time, Spencer was a meatpacking town, where locals could get a good-paying job with benefits.

“Growing up there I remember dad at the packing plant a lot,” Glasson said. “That was where the good jobs were in town. Everybody worked there … The pay was better than most of the other jobs in town. Back in the day, those jobs existed. That’s what I remember most about growing up there.”

Her parents weren’t active in politics, but Glasson did get a little involved during high school, even though she didn’t see herself as strictly a Democrat or Republican then. She liked the idea of the Jimmy Carter Peanut Brigade (a volunteer group for Carter supporters), and she and friends registered people to vote in Spencer.

Glasson says one of the main lessons her mother taught her and her sister was to not be judgmental. Mostly, her parents, who weren’t college educated, just worked hard to ensure Glasson and her sister could go to a good school.

Getting Into Nursing And Organizing Her Co-Workers

After high school Glasson attended the University of Iowa to study nursing. She’s worked in the university hospital system ever since graduating and lives in Coralville. For most of her early years there she was busy enough her job and family to do much else.

Then in 1998 she helped lead the push to unionize her fellow healthcare workers into a SEIU (Service Employees International Union) local. They formed SEIU 199, which now covers a few thousand workers in the Iowa City area.

“I learned a lot about myself and the power of what happens when people can join together and be stronger together,” Glasson explained. 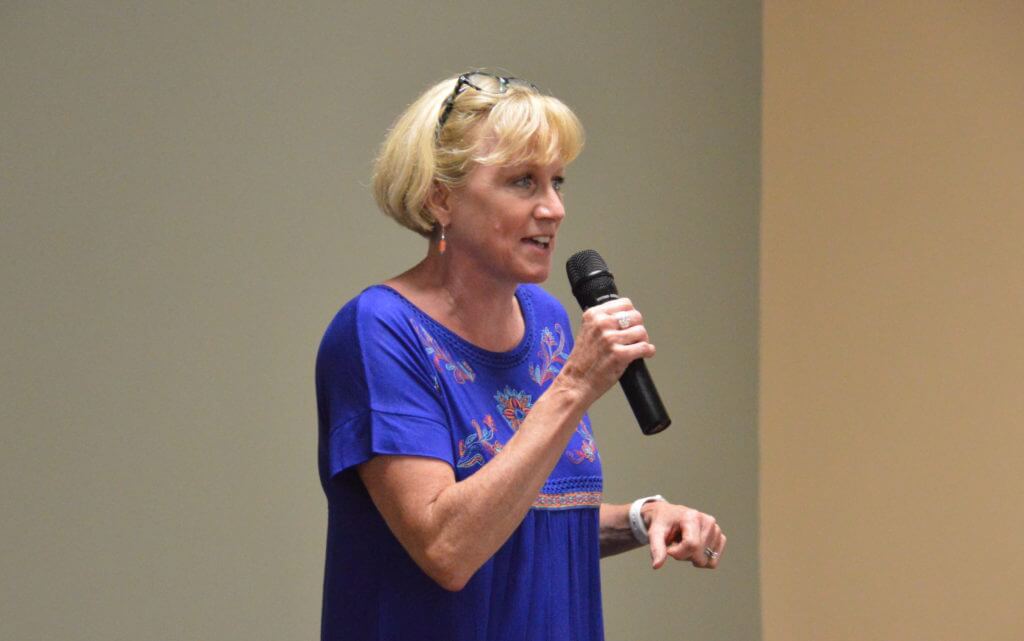 After unionizing, university healthcare workers won a push to get paid extra when they worked the Christmas shift and formed a labor committee to take workplace improvement concerns to management. They kept their good benefits packages, which are now some of the best for healthcare workers in Iowa and neighboring states. Glasson serves as the president of SEIU 199.

Pushing Healthcare Into The National Conversation

Glasson’s organizing work soon went beyond her workplace. During the 2004 Iowa Caucus, SEIU made a big push to nail down the Democratic candidates on more progressive healthcare policies.

“We were in every venue they were, wearing ‘I’m A Healthcare Voter’ t-shirts,” Glasson said. “What’s your position? We were instrumental in shifting the debate at the presidential level in making sure that affordable healthcare was accessible.”

Though George W. Bush won reelection in 2004, the seeds of the healthcare debate were planted, and the issue became a key flashpoint of the 2008 primary.

After the ACA was passed, Glasson worked in another SEIU project to educate nurses around the country about what all exactly was in the new healthcare law. So she’s been particularly disheartened to see what the Republicans are trying to do to gut the law at the national level, and how the insurers at the state level are pulling out of the exchange.

“Here in the state we can do something about it,” Glasson said. “The Republicans, Governor Reynolds have to take responsibility for the mess this state is in and the hundreds of thousands of Iowans who aren’t able to access affordable healthcare. Not to mention Medicaid privatization. It’s ridiculous that corporate buddies are getting deals on privatization and Iowans are bailing them out.” 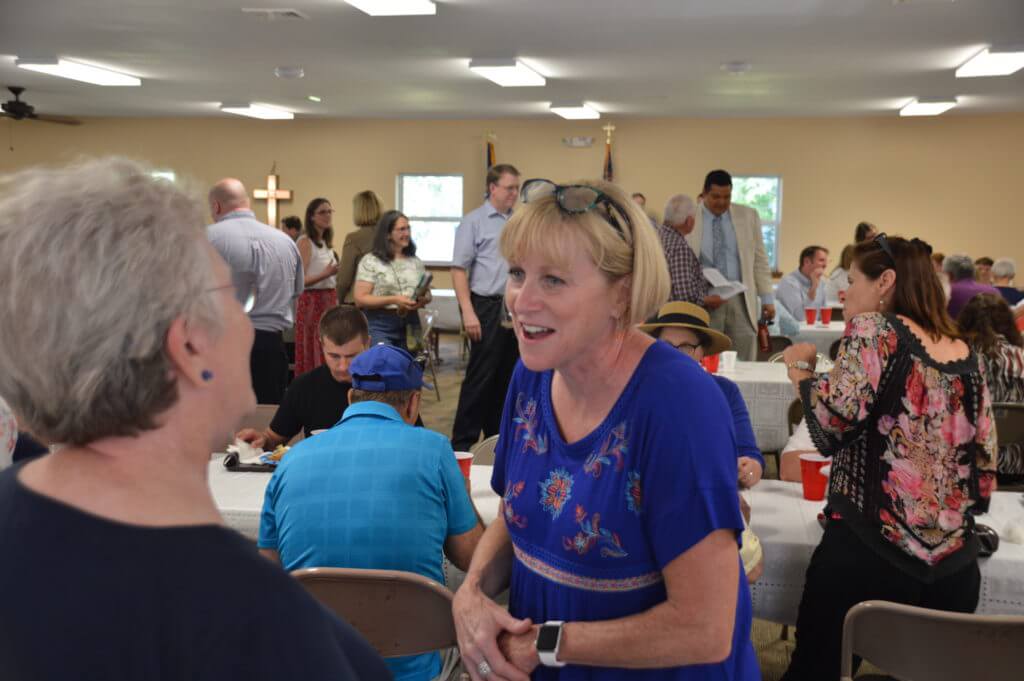 Glasson said she’s seen the impact of the ACA every day in her line of work.

“We know under the Affordable Care Act that the hospitals were actually busier because patients were able to access the care that they truly needed,” she noted. “What will happen if we don’t make sure healthcare is affordable and accessible to everyone is we’ll go back to the days where the insurance companies called the shots, and the cost will be too high for people to afford.”

That’s already apparent with the opioid epidemic in Iowa, where Glasson has seen how people who can’t seek treatment are ending up in jail, an unstainable system all around.

A Campaign To Draw Back In Frustrated Voters

While healthcare is a major part of Glasson’s life and her early message, the key focus of her campaign is on creating an economy where workers can actually earn a real paycheck.

“We talk a lot about good jobs,” Glasson said. “A good job is one that allows a family like my parents did to raise their kids and send them to school. That’s not what we have in this economy. 381,000 households in Iowa can’t meet their basic needs. 2/3 of the jobs in this state pay less than $20/hour. You can’t raise a family, pay for childcare and pay your rent, food and gas with that kind of low-wage economy.”

Her campaign hopes her message will appeal to many of the voters who have gotten frustrated with the political system in recent years.

“Iowa is at a race to the bottom and people are hurting,” Glasson said. “Those are the people and the voters that I will be listening to. That’s the base. They’ve been ignored by this Legislature and the politicians in charge in Des Moines. I am going to run on – and I am not afraid to say this publicly – we start by raising the minimum wage to $15/hour. Also near and dear to my heart is allowing workers to join unions. Make it easier, not harder.”

Part of that strategy will entail expanding the electorate for the Democratic primary and the general election. Glasson says she doesn’t want to “talk to the same people over and over again,” but instead engage Iowans who are struggling with their everyday needs.

Right now her campaign is in the “exploratory” phase. She faces a field of seven other Democratic contenders for the nomination to take on Republican Kim Reynolds. What would convince her to go all-in?

“The most important thing will be to decide if Iowans are ready to jump in and rise up to create the change we need to have happen,” she explained. “That’s going to be important in moving forward with a campaign. I know Iowans are ready for it, I can see by the excitement around the launch.”

On just their first day, Glasson and her campaign was impressed by the amount of sign-ups that came in through their website. Her launch video, which mixed about equal parts biography and a clear, four-point policy plan, was very well-received in most Iowa political circles. In particular Glasson was pleased with the number of young people who were showing interest with the campaign early on.

“It shows me that there is a void for people, and I think this campaign will fill that void,” Glasson predicted.