Fiscal Year 2017 is estimated to bottom out at a $130 million deficit.

So what happened? Well, it turns out that four years of huge property tax cuts for corporations does a number on how much revenue Iowa can bring in, and they clearly haven’t stimulated Iowa’s economy in the way Terry Branstad and Kim Reynolds promised.

House Democrats this week pointed to that deficit as further proof of the Republican administration’s fiscal mismanagement.

“First, the state budget deficit is largely the result of new corporate tax giveaways that have increased exponentially and now top $500 million annually,” Representative Chris Hall wrote in a memo. “Those giveaways have not produced the economic growth Republicans promised and, instead, have slowed the state’s economy. The Branstad-Reynolds administration has failed in its promise to create 200,000 jobs and raise family incomes by 25 percent.” 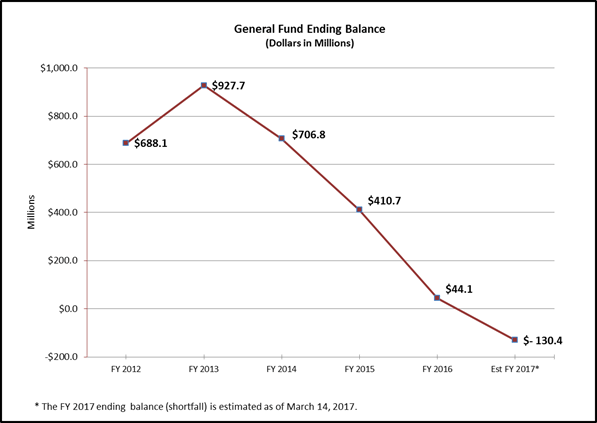 The downward trend of Iowa’s ending balance doesn’t give much hope for the near future, nor does the continued focus of Branstad and Reynolds on fixing the problem by cutting more programs for working and vulnerable Iowans. The only people who have really benefited from the current administration have been well-connected donors and large business interests.

“Iowa would not be faced with a budget deficit today if the GOP had spent more effort managing the state budget, rather than pushing the agenda of their donors and outside special interests,” Hall continued, criticizing Republicans for spending more than Iowa has taken in over the past few years, depleting the budget’s carry-forward funds in the process. “They’ve abandoned their steadfast fiscal principles after breaking them for three years straight, and have done so at the expense of their own constituents … This session should be immediately viewed as historic in terms of putting corporate interests before those of working families in Iowa.”

For a party that likes to pride itself on fiscal responsibility, Kim Reynolds may hand that issue right over to the Democrats in 2018, depending on how she handles the deficit she helped created. They can’t use the state’s emergency funds forever, as they are to cover this year’s addition $131 million deficit. And while Branstad and Reynolds promised in their reelection campaign to raise Iowans’ personal incomes by 25%, it’s impossible to point at their budgets and cuts to address the shortfalls and say that working Iowans are one of their priorities.

2 Comments on "From Surplus To Deficit: Branstad And Reynolds’ Sad Legacy"