The proper use of government email has become a high-profile election issue in this 2016 cycle. Not wanting Hillary Clinton to have all the fun, Jake Highfill seems to have decided to add himself into some email controversy.

State Representative Jake Highfill once again faces a Republican primary challenge in his Johnston/Grimes-based district, this time from ophthalmologist Christian DenOuden. With voting on Tuesday, he sent out an email to local voters encouraging them to support him in the primary. One problem, though: he sent it out from his official state legislative email account.

Legislators and state employees are banned from using government resources from conducting any type of political activity. The rules around the actual legis.gov emails, however, are reportedly a little unclear. And occasionally there are simple mistakes – every now and then a volunteer emails the incumbent at their official account asking about where a yard sign is going, and the legislator replies without forwarding it on to their personal email.

But at least on the Democratic side of the aisle, legislators are discouraged from using their official email accounts for anything that could resemble campaign activity. So it was rather surprising to see a State Representative use his state email and email list to actively solicit votes: 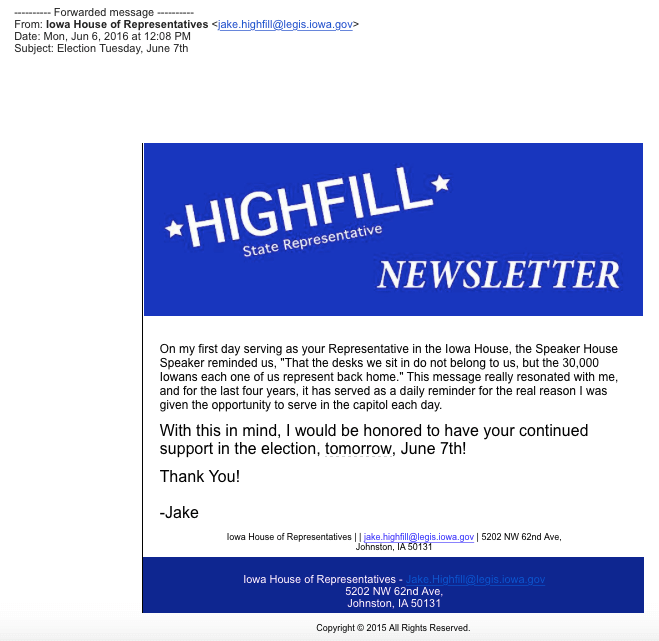 Highfill survived a three-way primary in 2014 (though got under 50% of the vote) after his surprising upset in 2012 of House Majority Whip Erik Helland. His opponent this time has raised a respectable $8,300 and seems active in the district.

House District 39 has seen surprisingly little activity on the early vote front considering there’s an active primary going on. A mere 28 Republican votes have been cast as of Friday, so the vast majority of the district will be voting on Tuesday. It’ll be interesting to see how they feel about their State Representative using his official email account for political purposes a day before the vote.