Now that we’re past the Labor Day holiday, often used as a marker for both voter interest and campaign phases, let’s pull out our crystal ball and predict what key factors and storylines will affect caucus night for the Democrats:

Insurgent campaigns have both succeeded and faltered in the Iowa Caucus. What type is Sanders? Every cycle the winning campaign typically brings out a large group of people who haven’t caucused before. “They don’t look like caucus-goers,” is what the Clinton campaign said to reassure themselves in 2008 with Obama, only to find out that it’s difficult to know for certain what caucus-goers look like each year. So far Sanders is leading the pack on this front, attracting new people out to his rallies, some of which aren’t even party-line Democrats. But is it enough?

The reason Obama won in 2008 is because he both brought out new voters and won over many of the long-time caucus activists. Even in his worst counties, at least a fourth of the county central committee activists were with Obama. He had 20 endorsers from the Iowa Legislature, and won over many county chairs and experienced caucus organizers. So when all those young people showed up to their caucus precinct for the first time, there was a solid group of Obama volunteers ready to greet them and keep them organized.

Sanders himself is obviously not the second coming of Barack Obama. That doesn’t mean he can’t win the Iowa Caucus in much the same way as Obama did. But so far he still has a lot of work to do in recruiting experienced activists. Even if they may not make a big difference on caucus night, Sanders notably has no major endorsers in the state, likely indicating they’re struggling to win over key volunteers. His labor outreach is crucially important – their support could provide important local leaders to help organize across a broad swath of precincts. And his rise in the polls may serve as a self-fulfilling prophecy as more activists become convinced he has a real shot of winning.

Many people don’t realize how much impact the delegate math has on caucus night – Democrats don’t report out a raw number of supporters who caucus for each candidate, it’s a percentage of delegates elected. And every precinct has a set number of delegates – so you could turn out 100 or 1,000 supporters in a given precinct, but you’re still only going to get so many delegates from it. This means that each campaign will be jockeying to have solid precinct captains in important precincts, and find ways to maximize their delegate math. The Sanders campaign may have to make decisions about targeting smaller counties like Cedar, where he’s doing well, and focus less on student-heavy precincts, where an individual vote may not matter as much.

In 2008 the Obama campaign appeared to employ an ingenious caucus math strategy in Western Iowa (though I never was able to confirm this). They didn’t win many of the conservative-leaning, rural counties, but they racked up much better percentages than Clinton did in urban counties. This happened because they seemed to put in just enough effort to get their groups viable in the smaller precincts that elected three to four county delegates, and then went all-out in one larger precinct per county. In nearly every rural county in Western Iowa, turnout in a single precinct swelled with Obama supporters that the local Democrats hadn’t seen before, winning him the majority of delegates in counties’ largest precinct. That kept his margin respectable in counties he didn’t win. And it was just smart resource allocation – if a precinct only elects two to four delegates, then you should turn out enough people to be viable, get your one delegate and move on (in some cases, having 15% of the people in a precinct gets you 25% of the precinct’s delegates).

Every single precinct must be approached differently, which requires some amount of local control. You can’t set a statewide goal to get 40% or 45% everywhere (the Clinton campaign had a mindset to fight to win every single precinct in 2008, pumping resources into areas that simply wasn’t going to happen). So which team will figure out how to best work the delegate math?

Falling fast in Iowa and national polls, Clinton may soon find herself consistently in second to Sanders in Iowa (though some of that depends on what Biden does). Will she go on the attack? Will her surrogates? Her Super PAC? Going too negative in the Iowa Caucus has backfired in the past – Dean and Gephardt destroyed each other in the final months of the 2004 Caucus (although Edwards and Obama hit Clinton often in 2008 with little consequence). The big problem Clinton faces here is avoiding alienating Sanders supporters. Even were she to lose an early state or two, she’s still the overwhelming favorite to win the nomination in the end and needs those voters motivated to show up in the general (many of which are the tired-of-politics-as-usual type). Sanders has refused to criticize her too directly, making things even more awkward if she throws the first punch. She may just have to stick it out and hope the press scrutinizes her opponents for her.

Will O’Malley’s Poll Numbers Catch Up With His Effort?

Anyone who attends an O’Malley event in Iowa comes away wondering why the charismatic, energetic former Governor hasn’t caught on more in the polls yet. It’s really not that early anymore, and concerns over Clinton’s email server issue and electability should have sent some support his way. The biggest problem is that he gets essentially no national press, so unless you’ve seen him out at an event in Iowa, you just don’t know much about him. Still, some activists and my fellow reporters wonder why even that hasn’t helped more, considering he gets good crowds nearly everywhere he goes.

But I noticed something very telling last week. At his event at Confluence Brewing in Des Moines, O’Malley turned out an impressive crowd of 250. As I looked around the room, however, I realized I’d seen at least two-thirds of these people at an O’Malley event before. O’Malley often jokes about how Iowa caucus-goers want to meet you two, three, four, five times before they decide. He should know. He’s met people two, three, four, five times already. But he’s not pulling in a lot of people outside the activist, insider set (still a great crowd to win over, as they know how to organize). Again, that’s largely because he gets so little national attention, so more people aren’t motivated to come out to give him a try. 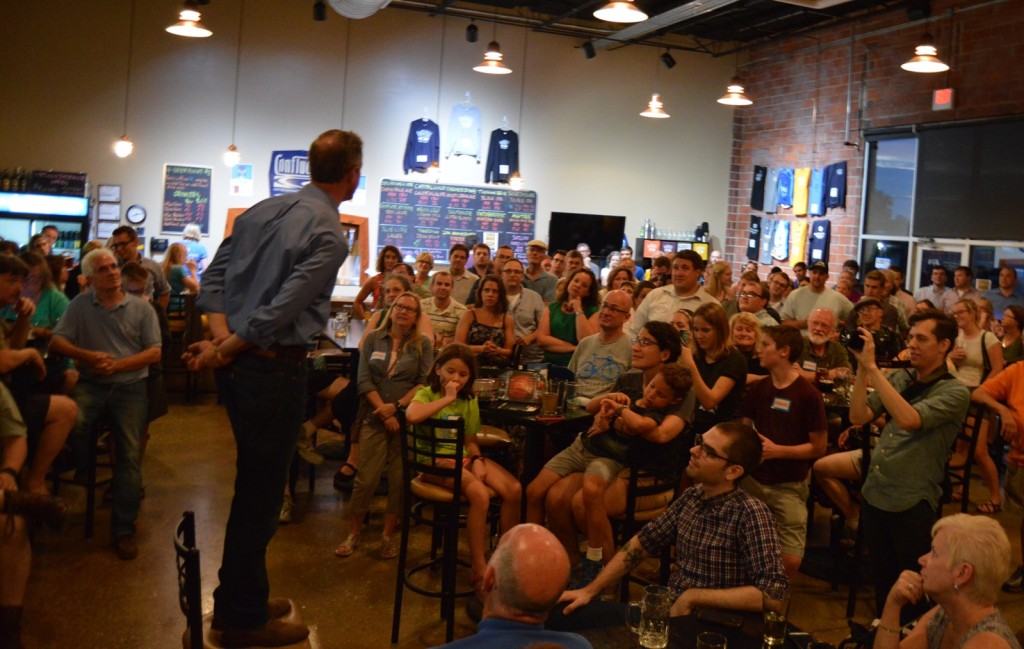 O’Malley needs to win a news cycle, or at least be present in one. He’s developed a good infrastructure in Iowa that’s ready to capitalize, but there’s a limit to what a smart, traditional caucus effort can do. He’ll have his chance at the first debate in mid-October if he doesn’t find something creative before.

What Issues Will Separate The Candidates?

There are not many policy differences between candidates, but that will not stop campaigns from defending the differences that do exist. In 2008, health care reform was supported universally by Democratic candidates. The candidates had major differences on how to implement it, and there were arguments on mandates, single payer, and whose plan was better. As we get closer to the caucus, we can see similar issue pop up. The TPP trade deal was a major one during the summer that boosted Sanders, but it’s receded from the headlines recently. One of the most cited issues will be the environment and climate change. Clinton’s non-answer on the Keystone Pipeline (she probably supports it) will be a key difference, and each candidate has different stances on renewable energy. Clinton and O’Malley have unveiled policy proposals, but Sanders has yet to roll out a comprehensive plan, and only recently made comments on certain renewables. The Iran deal, campaign finance, Wall Street Reform, trade, and college debt can all be issues that the candidates will need to have answers for fast.

Will Anyone Use The New Caucus Satellite Locations?

Satellite caucuses are available this year by petition. The Clinton campaign could utilize these satellite caucus locations, which the IDP had to adopt because of Clinton supporters on the rules committee. It would be interesting to see how labor unions at factories with second shift works would handle this – do they actually think rank and file members would go with Clinton, or would they be helping Sanders even if their union endorsed?

Is Jim Webb Going To Campaign At All?

Ok, so this one won’t have a major impact on the end result of the Iowa Caucus. But seriously, Webb has a halfway legitimate story and message he can tell, even if some of his issues are to the right of the rest of the field. He made several trips to Iowa in the late spring/early summer, yet has been missing from the campaign trail for over a month. There’s actually a decent-sized contrarian vote among Democrats – activists who never caucus for the candidates doing well in the polls or getting media attention. Webb could capture some of this, likely to O’Malley’s detriment. But he doesn’t seem too interested in that, or really anything else to do with this presidential campaign he launched.