After five days on the road with the top three Democratic presidential candidates, I’m back at home decompressing and sorting through all the interesting tidbits that didn’t make it into my main posts. Here’s some good odds and ends of what I saw out at eight Sanders events, four Clinton events and an O’Malley one:

For a candidate who has yet to break above 7% in an Iowa poll, O’Malley certainly continues to draw good crowds on the Iowa Caucus trail. Several of those nice turnouts have come in local Iowa bars, as the former Governor of Irish descent seems to pop up in often. He drew over 250 to Confluence Brewing in Des Moines on Saturday night, many of which were the insider, activist type in Des Moines who know how to organize.

“I was bowled over by the amount of people who came out today,” O’Malley told me afterwards. “The whole movement of craft breweries and everything that goes into them is all about local and local employment and local products, which is a good theme as well. I think we’re getting more and more traction here, every time I return. And Iowa voters, particularly caucus voters, really care about the policy. They care about the ideas.” 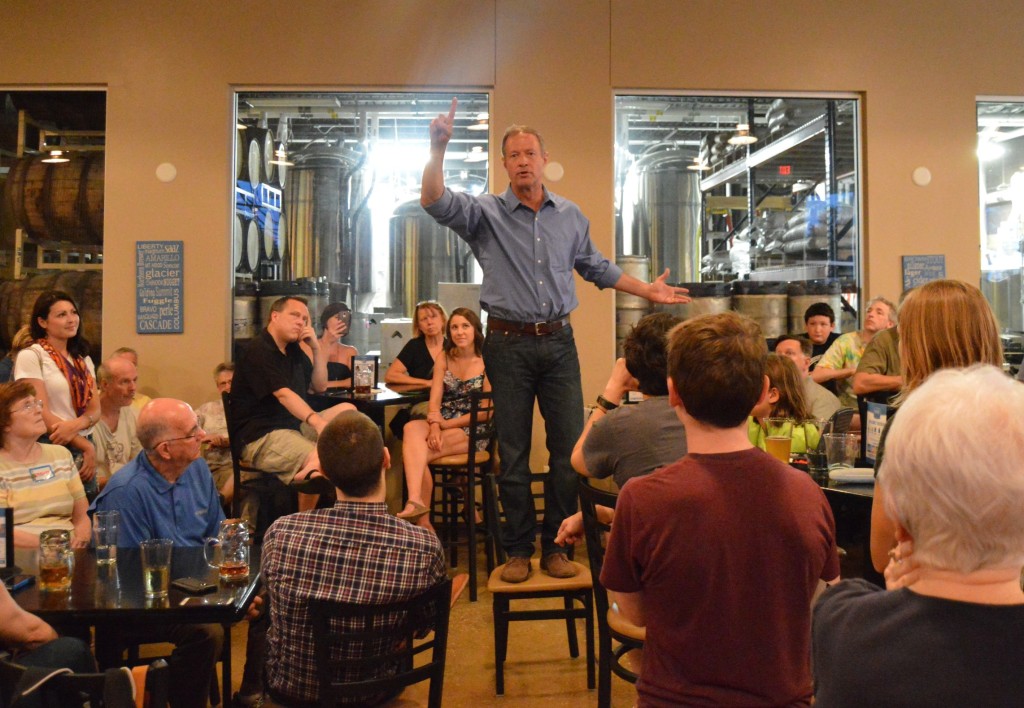 Hosting events where attendees can discuss policies over a pint is a good strategy for O’Malley. Much of his campaign has focused on presenting himself as the new generation of leadership, and you’re more likely to entice younger voters to come out to a craft brewery to hear that message. It also presents a more laid-back atmosphere for the candidate to mingle with caucus-goers and discuss their issue concerns.

Unfortunately, I wasn’t able to get to any of O’Malley’s events with labor. John Deeth has a good write-up here of his visit to the Iowa City Labor Day event.

Bernie Sanders on Refugees and the RFS

On his way out from his last event from his three-day swing, another local reporter and I waited around to get in a few more questions to Sanders. First, on the European refugee crisis, Sanders was asked about O’Malley’s plan to accept 65,000 refugees into America, and what he thought the United States’ role in it is:

“Obviously the U.S. has got to work with Europe, and I think the European governments are now trying to determine how they can address this humanitarian crisis in a way that is appropriate for Europe,” Sanders replied. “And the debate they are having is how many of the refugees should go to different countries. And I think what they want to establish, which is right, is not all refugees end up in Germany or in the UK. And that’s what they’re working on. And I think the United States has got to be supportive and work with them. All over the world we’re seeing the refugee crisis, and not just in Afghanistan, not just in Syria, we’re seeing it in Latin America as well. I think the world has got to be working together to address this. Let me say, the other thing, though. At the end of the day, most people do not want to leave their countries. They’re leaving their countries because they don’t want their kids to be killed with bombs, they don’t want to be shot, they don’t want their daughters to be raped. And the United States and the world also have to be deeply committed to trying to bring stability to these countries because at the end of the day people would prefer to live in their own countries rather than have to pick up with nothing on their back to move to another country.”

Secondly, Sanders was asked about ethanol as the plant he joined the informational picket outside of the night before produces ethanol as well as corn starch:

“I certainly support the RFS,” Sanders said. “I think anybody who knows and understands that climate change is a terrible threat to this planet understands that we have to transform our energy system away from fossil fuels to energy efficiency and sustainable energy. I think we also know that we’re going to have to move aggressively to create more efficient biofuels. I would like to see us develop and work more aggressively on cellosic biofuels of which are more efficient. But I think Iowa deserves a lot of credit for helping us in many ways break our dependence on fossil fuel.”

A Sleepy End To Clinton 1.0

A major story in the New York Times yesterday signaled a reboot was coming for the Clinton campaign. These things sometimes happen around major holidays, so perhaps that’s why Clinton’s swing through Iowa seemed like they were just going through the motions while awaiting new orders. The Dave Loebsack endorsement was nice, I suppose.

Many press reports have criticized her first couple months of campaigning as ineffective. From where I’m standing, I don’t agree with that assessment – were it not for the email server story, she would be doing just fine. Unfortunately, that has consumed a good 90% of all press coverage around Clinton at times. But the rest of the campaign – the increased emphasis on organizing in early states, the policy roll-outs, the big dinner speeches and lack of internal drama – has been an considerable improvement over the 2008 operation.

How they re-calibrate now will likely be crucial to the end result of the Iowa Caucus. Some things certainly have worked, and wholesale campaign changes rather than a targeted effort to finally quash the email story may not be best. The biggest thing this campaign seems to need right now is energy and momentum. It was quite the stark contrast in crowd size and enthusiasm between the Sanders and Clinton events the past five days. Sanders brought in 500 constantly applauding and cheering supporters to Burlington on Thursday; Clinton got around 200 there on Monday. Getting away from the constant, depressingly negative email stories or returning to the feisty, combative Clinton from the Hall of Fame or Wing Ding might help.

Sanders Mixes It Up, Builds His Coalition

One last thing I wanted to mention – Sanders’ three-day tour around Iowa was a very smart exercise in building up a broad coalition of support for his campaign. His stops had significant variety to them – college visits by Grinnell and Coe College, an immigration forum in Muscatine, a picket march in Cedar Rapids, a labor-heavy rally in Burlington, an office opening in Ottumwa and a visit to the Meskwaki Reservation in Tama. The outreach to both labor and Hispanic activists should be concerning to the Clinton campaign – broadening his base beyond the outsider-type voter who doesn’t always caucus and the college-aged crowd is exactly what will give Sanders a shot at winning the Iowa Caucus.