Democratic candidates have brought up climate change often in their Iowa Caucus pitches the past few months, but this week saw the issue front and center with new proposals and visits by candidates and issue groups. Martin O’Malley introduced a climate and clean energy plan several weeks ago, and Hillary Clinton followed up this week with her own.

On Sunday night the Hillary Clinton campaign released a video announcing her plan to address climate change through investing in clean and renewable energy. The next day she toured the DART Central Station in downtown Des Moines, a LEED Platinum-certified building (a green, energy-efficient rating), and spoke to the press about her new plan.

“On day one as president I will set two ambitious national goals for renewable energy,” Clinton said while flanked by two bike racks in the DART center. “First, we need to have more than half a billion solar panels installed across the country by the end of my first term. Second, we’ll set a ten year goal of generating enough renewable energy to power every single home in America.”

That installation of solar panels, according to the policy paper put out by her campaign, would increase solar power production by 700% of current levels. Part of that would be accomplished through a “Clean Energy Challenge,” which would provide competitive grants and incentives to states and communities investing in clean energy.

“I believe climate change is a challenge of such magnitude and urgency that we need a President who will set ambitious goals,” Clinton replied to a question. “I want to get back to our country setting big, ambitious goals. I remember what it felt like as a young person when President Kennedy set the goal of going to the moon in a decade, and we beat it. We got there before the end of the decade. I want us to get back into the future business … The next decade will be as decisive for climate change as the decade for getting to the moon was for space exploration.”

Clinton also vaguely referenced the Republican resistance to confronting the climate change issue with a modified line that drew considerable applause at the recent Hall of Fame Dinner.

That Republican intransigence could still prove problematic to get through Congress, but Clinton pointed to local progress to show it could still be done.

“We still have a lot that we can do without getting Congressional support,” Clinton said, noting the executive orders President Obama has issued. “This is not a Republican or Democratic problem, and I think Iowa has proven that. You’ve had Republican and Democratic governors and legislatures move forward on a public-private partnership on behalf of clean, renewable energy.”

Environmentalists, clean energy promoters and climate change activists should be pleased to see many of the details in the Clinton plan, and that it’s becoming such a high priority in the presidential campaign (at least on the Democratic side). However, one sticking point with the Clinton plan came up on Monday: her refusal to take a stance on the Keystone XL Pipeline, which many activists see as a potential major contributor to climate change problems.

“No other presidential candidate was Secretary of State when this process started, and I put together a very thorough, deliberative, evidence-based process to evaluate the environmental impact and other considerations of Keystone,” Clinton explained as her hesitance. “As such, I know there is a very careful evaluation continuing … I’m confident that the pipeline’s impact on global greenhouse gas emissions will be a major impact in that decision as the president has said. So I will refrain from commenting because I have a role in getting that process started and I think we have to let it run its course.”

Both Bernie Sanders and Martin O’Malley have come out in strong opposition to Keystone, a point the O’Malley campaign has made often this week.

Still, Clinton did make clear a desire to discourage assistance to fossil fuel production. “We’ll stop the giveaways to big oil companies and extend instead tax incentives to clean energy, making them more cost-effective for taxpayers and producers,” she said. “We’ll support and improve the Renewable Fuel Standard, which has been such a success for Iowa and rural America.”

The day after Clinton discussed her climate change initiatives with the press, NextGen founder Tom Steyer traveled to Ankeny, Iowa to highlight the economic advantages of clean energy. Steyer is the California billionaire and philanthropist who has devoted significant funds into making climate change a top priority in American politics. They’ve built a large organization in Iowa for the Iowa Caucus, and you might actually be forgiven if you thought you were arriving at a top-tier presidential candidate event as you drove onto the DMACC Ankeny’s campus yesterday. A number of orange-shirted sentinels directed attendees into a well set-up roundtable discussion. 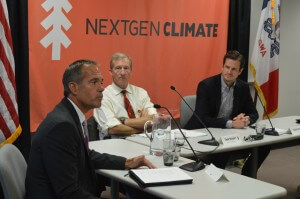 “The technology is much further along than people understand,” Steyer emphasized early and often during the roundtable. “I think there’s a sense that these are nascent businesses, that they’re start-ups, that they’re risky. That’s not true. The fact of the matter is, these are going to be basic energy generation for the future. This is where we’re going.”

Both Ocken and Olson backed up that idea, describing the significant gains in the economics of clean energy they’re seen first-hand in Iowa. Olson explained that the return on investment for solar installations on some rural, agricultural areas are achieved in just two to three years.

“Three-quarters of the new electricity generation in the United States in the first half of this year was renewable,” Steyer said. “Something different about these kinds of [renewable] industries than fossil fuels is this: the costs go down. The cost of solar power has gone down 80% between 2008 and 2013 … renewables are going to keep getting cheaper every single year.”

Steyer argued that creates a major economic opportunity for America, and is a big reason why all the presidential candidates should be addressing ways to grow the clean energy economy. “It is time for us to start talking about solutions and stop talking about politics,” Steyer said, noting he was “through debating the climate problem.” 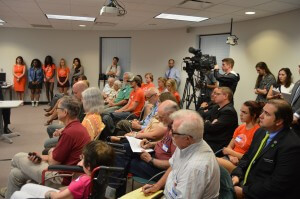 “The question is how fast are we going to do it, and are we going to lead the whole world and export it,” he continued. “That’s really the opportunity. The fact of the matter is everyone’s going to have to do this. If we’re at the front end and use our technology to lead that’s going to be a fantastic opportunity for Americans.”

Key to accomplishing all that lies in large part, Steyer pointed out, with Iowans and their discussions with presidential candidates in advance of the Iowa Caucus. “It’s not a concidnece that when Hillary Clinton came out with the framework for her clean energy plan, she did it in Iowa,” Steyer said, adding that the people in the room at DMACC have a big influence in whether climate change really gets addressed.

Ocken noted that he’s already seeing an excitement about clean energy at DMACC. He said the enthusiasm that students bring to learning how to work on wind turbines reminded him of the patriotism surge after 9/11. This time, however, he says they’re excited to get involved in clean energy projects to help America be a leader in the “green energy revolution.”

With press after the roundtable, Steyer noted that Democrats have been doing a good job so far in the presidential campaign in addressing the issue. “The Democrats pretty much want to deal with this,” he said, though he hopes they continue to expand on their proposals. “The Republicans are struggling with it.”

On the Keystone XL Pipeline, Steyer would prefer candidates come out against it, saying it’s part of the supply issue in the climate change debate. While he was happy that several candidates are focusing heavily on the demand side (providing incentives for clean energy production), he noted that the supply of fossil fuels needs to be addressed as well.

“She obviously feels like she shouldn’t answer it until the rule comes out from the State Department,” Steyer replied when asked about Clinton’s non-position. “We obviously are very strongly opposed to Keystone … Keystone to us is a gigantic supply issue. I think what [the candidates] are going to do is a concerted and inclusive program on demand, and the assumption is going to be that the supply takes care of itself, which I don’t necessarily agree with, but that’s where the discussion is going.”