The wife of a Woodbury County Supervisor and a well-known local Republican activist in her own right has been charged with 52 federal indictments related to voter fraud.

According to federal court documents that were unsealed on Thursday, Kim Phuong Taylor, 49, of Sioux City concocted various election schemes in 2020 to get her husband, Jeremy Taylor (R-Sioux City), elected, including voting on ballots herself for members of Sioux City’s Vietnamese community.

“In some instances, TAYLOR voted the absentee ballots and signed the accompanying affidavits for residents who were not present at the time or told residents who were there that they could sign the forms of their other family members,” the indictment, which you can see in full here, read.

In the charging documents, Jeremy Taylor is referred to as “PERSON A.” He was once forced to resign from a different supervisor seat after being stripped of his voter registration for lying about his residence.

Kim Taylor allegedly approached members of the Sioux City Vietnamese community, including those who the indictment says had limited ability to read and understand English, and offered to help them vote. Kim Taylor would visit the homes of these Vietnamese community members and bring voter registration forms and absentee ballot forms and, in some cases, fill them out on their behalf.

According to local Democrats, she has worked the city’s sizable Vietnamese population for over a decade to bring in votes for her husband and the Republican Party ticket.

“TAYLOR accomplished this [securing votes] through a variety of means, including by approaching residents of the Vietnamese community in Sioux City, Iowa who had limited ability to read and understand English and offering to help them vote,” the indictment reads. “…In some instances, TAYLOR either assisted the residents with filling out the forms or filled them out herself.”

After filling out the forms, Taylor would either mail them to the Woodbury County Auditor’s Office or place them in one of the county’s drop boxes.

Kim Taylor would also use her Facebook page to reach out to Sioux City’s Veitnemesse community to offer them her assistance with voting. 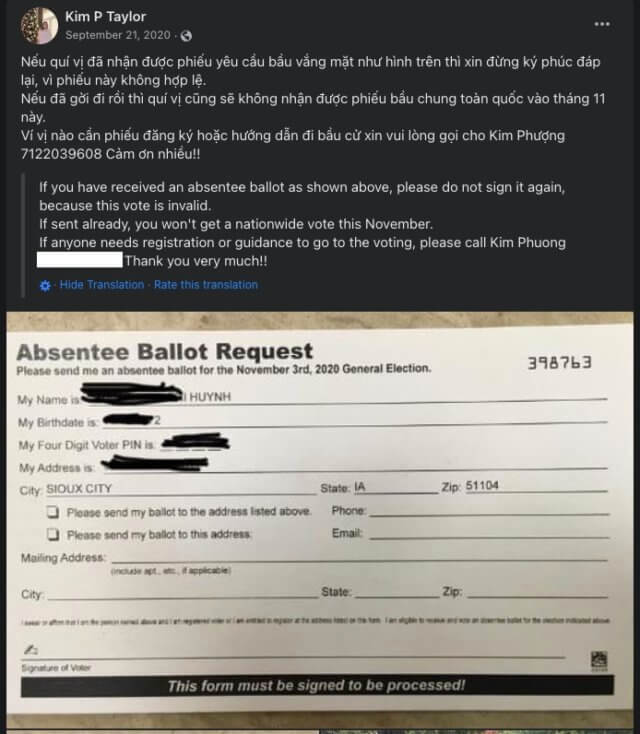 In 2020, Jeremy Taylor was a part of a five-man Republican primary race in Iowa’s 4th Congressional District, which included then-Rep. Steve King and future Rep. Randy Feenstra. Kim Taylor is accused of arranging votes in this race on behalf of her husband.

Despite his wife’s alleged assistance, Jeremy Taylor came in a distant third place during that 2020 primary race, capturing 7.8% of the vote compared to 35.8% for Steve King and 45.5% for Randy Feenstra, who would go on to win the general election that year.

In the midst of Jeremy Taylor’s congressional run, he served as the Woodbury County District 2 Supervisor but was forced to resign from that seat after a January 2020 investigation conducted by the Woodbury County Auditor’s Office determined he was actually living in District 3.

However, Jeremy Taylor was selected by a Woodbury County Republican panel to run for the District 3 Supervisor seat in the 2020 general election and Kim Taylor is accused of using the same tactics she did during the general in that race as well.

Jeremey Taylor was successfully elected to his District 3 supervisor seat in fall 2020.

Before winning a seat on the Woodbury County Board of Supervisors in 2014 (in his original seat), Jeremey Taylor was a state representative representing Sioux City from 2011-13. He first ran for his former Iowa House seat in 2008, lost that race, ran again in 2010, won that race, but lost his 2012 reelection bid after redistricting.

According to the US Department of Justice, Kim Taylor is charged by indictment with 26 counts of providing false information in registering and voting, three counts of fraudulent registration, and 23 counts of fraudulent voting. If convicted, she faces a maximum penalty of five years in prison for each count.

The case was investigated by the FBI Omaha Field Office and US Postal Inspection Service Denver Division. According to the Sioux City Journal, an investigation into Kim Taylor’s activities was sparked by a tip to the FBI from Woodbury County Auditor Pat Gill, who reported his initial suspicions to the Iowa Secretary of State’s Office, which directed him to contact the federal law enforcement agency.

Kim Taylor’s trial is scheduled for March 20 at the US District Court in Sioux City.

If you enjoy stories like these, make sure to sign up for Iowa Starting Line’s main newsletter and/or our working class-focused Worker’s Almanac newsletter.

To contact Senior Editor Ty Rushing for tips or story ideas, email him at ty@iowastartingline.com or find him on social media @Rushthewriter