The group of Nazis who spread anti-semitic messages around Des Moines on 9/11 got their feelings hurt by Democratic Senate candidate Mike Franken yesterday.

After Starting Line reported on how a member of the “319 Crew,” a Northeast Iowa Nazi organization, drove around Des Moines in a U-Haul truck adorned with a swastika flag and anti-semitic banners, Franken blasted the action and those behind it.

“These repugnant, anti-Semitic displays have no place in Iowa,” the retired three-star admiral said on Twitter.

In their telegram channel in the hours after condemnation rolled in online for their actions, the Nazis specifically took notice of Franken’s tweet and proceeded to whine about it.

“Sounds like something a Jew would say,” one Nazi said. 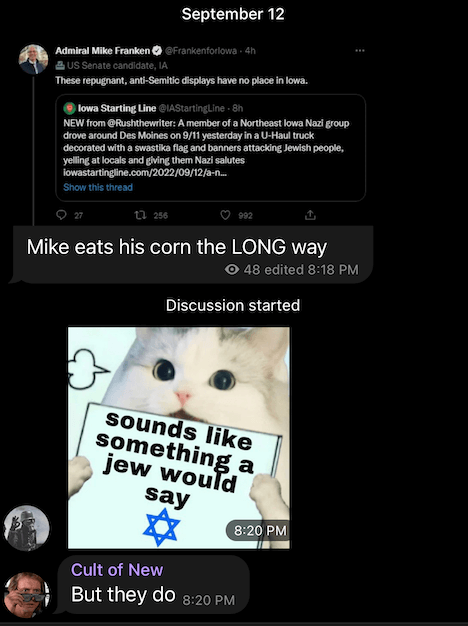 Sunday’s Des Moines drive-through in the moving truck was at least the third instance of the Iowa Nazi group spreading anti-semitic messages in local communities. Previously, fliers had been posted in Oelwein and Strawberry Point.

The 319 Crew posted another video of their Des Moines exploits on Tuesday, showing the driver shout “Jews did 9/11! They were responsible!” at random pedestrians in the metro.

Rep. Cindy Axne, who represents the Des Moines metro in Congress, also spoke out against the Nazi displays.

I'm deeply disturbed by the disgusting, anti-Semitic displays by an individual in a moving truck who traveled to several locations across Des Moines yesterday.

Hatred and bigotry have no place in our communities and my team and I will continue to monitor the situation.