An Iowa town of fewer than 2,000 people is now home to a good-old-fashioned newspaper war and Tyler Anderson is smack-dab in the middle of it.

So why does Lake City, a town with a population of about 1,700 and that boasts the charming slogan of “Everything but a Lake,” have two newspapers in an era where more print publications are shuttering than opening?

The main reason is that no one can agree on who actually owns the Lake City Graphic-Advocate.

The 122-year-old paper’s future was called into question earlier this year by Hampton-based Mid-America Publishing, one of the paper’s proclaimed owners. Mid-America acquired the Lake City Advocate and the Lake City Graphic in 2007 and eventually consolidated the two publications into the Graphic-Advocate.  The company publishes about two dozen community weeklies in Iowa.

Anderson grew up in the area and has a deep affection and sense of loyalty for Lake City and the Graphic-Advocate. He publicly shared the news of the paper’s pending demise in an attempt to save the local institution.

According to Anderson, Grohe forced him to sign a document he wasn’t given enough time to review, which he was then accused of breaking. This supposed violation led Grohe to suspend him.

This all took place during Holy Week, and by Friday, April 15, Anderson was let go.

In an interview with Starting Line, Grohe said that the conversation should have never been leaked and that it compromised a potential deal he had in place to sell the paper.

“It really complicated the transference of this paper,” he said.

Hasn’t made money for years

Two weeks after Anderson shared the texts, Grohe took to the Graphic-Adovate’s Facebook page to tell readers the paper was losing money and he couldn’t guarantee its future. 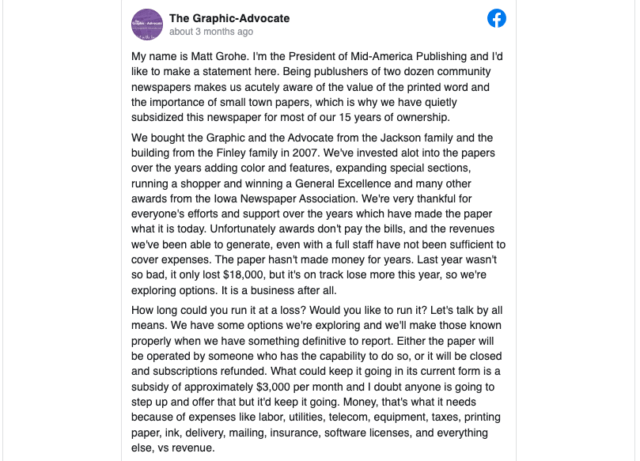 “We’re very thankful for everyone’s efforts and support over the years which have made the paper what it is today,” Grohe wrote on April 26. “Unfortunately awards don’t pay the bills, and the revenues we’ve been able to generate, even with a full staff, have not been sufficient to cover expenses.

“The paper hasn’t made money for years. Last year wasn’t so bad, it only lost $18,000, but it’s on track [to] lose more this year, so we’re exploring options.It is a business after all.”

Grohe also went on to say he is willing to sell it and thinks an owner-operator in the community could make it work.

“I wish there were more drama to it that would make a more interesting story, like a fairy tale with heroes, villains, damsels in distress and an epic struggle against a monolithic edifice,” he wrote. “But the truth is, it’s getting harder to run great papers on a shoestring.”

The post generated some sympathetic comments and a number of negative comments from readers, including more than a few from people who disliked how Grohe treated Anderson.

One of the more positive comments came from Nelson Media Co. Owner Chris Nelson, who expressed interest in buying the paper. Nelson, a former TV meteorologist who created his media company in 2020, wanted to get into community newspapers.

“Matt—you know I would love to take this challenge on for the people of Lake City, Iowa,” he wrote. “Let’s make a deal that makes sense for the community. This newspaper is bigger than both you and me, it’s such an important piece for them as citizens to remain getting their local news.”

About a month after the April 26 post, the paper was sold, but not to Nelson.

The Breitsprecher family of Dayton—the then-owners and operators of the Dayton Leader, which has since been sold to Nelson Media Co.—took over the Graphic-Advocate.

Grohe said the Breitsprechers, Nelson Media, and a third undisclosed buyer were all in the mix to buy the Graphic-Advocate. One of the reasons the Graphic-Advocate holds value is that it is considered a paper of record for multiple Calhoun County governmental entities, all of which pay to have their legal notices published in it.

Grohe said he thought the Breitsprechers would be the best fit and he knew them well since his company printed the Dayton Leader.

According to Anderson, Grohe agreed to sell the paper to the Breitsprechers for $1 and a month of free printing, but he didn’t entirely hand over the reins of the operation to them. This included withholding access to the Graphic-Advocate’s social media accounts.

“They kind of ran things for about four weeks,” Anderson said.

Grohe didn’t specify a sale price but noted the deal did include free printing.

Anderson said he helped the Breitsprechers with the Graphic-Advocate, working without pay, all the while trying to get them to consider including Nelson, who he had remained in contact with, in on the deal.

The lobbying seemed to pay off.

Nelson Media Co. announced on June 30 it had acquired the Graphic-Advocate from the Breitsprechers.

Grohe said he found out about the deal while reading a copy of the Graphic-Advocate in which it was announced. This led him to call Kendra Breitsprecher, founder and now former owner of the Dayton Leader. According to his recollection of the conversation, Grohe said he told Breitsprecher she couldn’t sell the paper since their deal wasn’t done and he compared it to a real estate transaction (Grohe is also a licensed real estate agent).

“You go to buy a house, you have buyer, seller, and then you have an offer,” Grohe said. “You work through all these contingencies and then you have a closing. So during the escrow period, you can do lots of inspections, you can bring people over to the property, you may even have an interim occupancy agreement where you can live in the property until you close, but one thing you can’t do is sell the house.”

Grohe also explained his view publicly in a July 8 post on the City of Lake City’s Facebook page.

“Unfortunately, we have to report that talks and efforts to sell the paper to both The Dayton Leader and Nelson Media have fallen through as of July 7th and Mid-America has not transferred its ownership, rights, trademarks or copyrights in The Graphic-Advocate,” Grohe wrote.

“We will continue to publish, print and file postal reports for the paper as we have done continuously since 2007 until such time as a sale can be completed,” he continued. “Other parties that have claimed ownership were served cease and desist letters on July 7th and asked to stop identifying themselves as being affiliated with or owning The Graphic-Advocate, to not accept further submissions and to desist from unauthorized use of our name and trademarks.”

Nelson disputed this and claimed ownership of the Graphic-Advocate, and the two sides went back and forth on social media about who really owned the publication.

This situation culminated on the week of July 10, when two issues of the Graphic Advocate came out. The July 13 issue was produced by MidAmerican Publishing staff from its other properties, and the July 14 issue was put out by Nelson and Anderson.

“It was a really good one,” Anderson said of the Nelson Media edition. “Had a really nice feature story, some really good local stuff and everything and then [Grohe] kind of blocked our ability to mail it out.”

One thought came to Anderson’s mind when he saw both issues.

“You know, like the Spider-Man meme where you point at one another,” he said.

Ellie Jackson, whose family sold the Graphic and Advocate newspapers to Mid-America Publishing in 2007, questioned Grohe on Facebook as to why he seemed so adamant about fighting for the publication after previously dismissing it.

“All I can see is that you were done publishing the paper and left the readers in the lurch, but once someone else actually *wanted* to keep publishing it, you changed your minds and started acting like the villains in a Hallmark movie,” she wrote.

Grohe told Starting Line he presented Nelson multiple opportunities to buy the Graphic-Advocate—Anderson said Grohe made unreasonable requests in those offers—but without a deal in place, MidAmerica plans to continue publishing the Graphic-Advocate.

“We do have another person interested in purchasing the paper, but this is now a stigmatized property,” Grohe said. “I think if somebody felt like they have good intentions with this newspaper and then they embarked on this course of action and publicized this whole thing and got everybody in the county worked up, they’re mistaken.

“I don’t feel like this was an effective way to transfer the ownership or the management of this paper to another party, which would have been done peacefully without all this hoopla. Now it’s like a circus.”

Nelson and Anderson got tired of bickering with Grohe and decided to do the next best thing if they couldn’t put out the Graphic-Advocate: Compete with it.

Anderson sat down with his team and fleshed out the concept for the Calhoun County Phoenix, a Nelson Media-owned publication that would also be based in Lake City.

The new paper’s name was chosen very purposefully by Anderson.

“The Phoenix. Like the bird rising from a Dumpster fire,” he said. “We didn’t include the Dumpster in the logo.”

The Calhoun County Phoenix’s website went online on July 26 and the first print issue comes out on Aug. 4. Anderson and staff have been hosting pop-up events in Calhoun County to get subscribers and they set up temporary shop in the Lake City Community building.

“A lot of people are filtering into the community building and just kind of showing their support, and it’s fantastic,” Anderson said.

This outcome is a great relief to Anderson. Since April, he has been suspended and fired from the Graphic-Advocate by one owner, worked freelance for another owner, and was rehired by a third owner only to have to help start an entirely new newspaper to compete with the publication.

Anderson said he had opportunities to leave Lake City and get a job elsewhere during all of this, but he couldn’t bring himself to leave the community. He likes the people in the area and he wanted to see how things shook out.

“This part of the world just holds a special place in my heart,” Anderson said.

The managing editor, who works with a team of four people including some fellow former Graphic-Advocate staffers to put out each issue of the Phoenix, said that he and everyone else close to the situation is more than ready to move on.

“I’ve probably had more drama in the last three-and-a-half months than I did the first three years since I came back from Texas,” Anderson said.

With the drama behind him, Anderson is ready to help the Phoenix grow.

“We’re going to get back to doing what we do best, which is good feature stories, good local news, great coverage of the school, and just being there,” he said. “That’s what I spent my last three years doing; just being almost everywhere and anywhere.

“If it was underneath a rock in the county, I might have been there to take a picture of it.”

2 Comments on "The Complex (And Petty?) Reason This Small Iowa City Now Has Two Newspapers"