Iowa Starting Line will be sharing historical photos of our state and our communities every morning on our Facebook page. Sometimes they’ll just be one-off interesting photos we find in archives, sometimes they’ll be a series on a specific topic. When we do a series, we’ll put all of them together in a post like this after it’s done so you can easily see them all in one place in case you missed a day.

Also, if you have any suggestions of future photo history topics we should look at, send them to Nikoel Hytrek at Nikoel@IowaStartingLine.com (and preferably include where specific photos on the subject might be found).

Here’s our series from this past week on the Civilian Conservation Corps in Iowa:

Several facilities in Ledges Park were built by workers in the Civilian Conservation Corps, the program started by President Franklin Roosevelt in 1933 under his New Deal agenda.

After flooding in 1935 much of the camp’s work was devoted to clean-up. However, Company 2723 of the CCC also planted trees, designed and constructed trails and mapped Ledges’ topography.

The Civilian Conservation Corps was started by President Franklin Roosevelt, March 31, 1933, as part of his New Deal Program. It was a voluntary government work program for unemployed, unmarried men between 18 and 25, which eventually expanded to include 17-26-year-olds. It lasted from 1933 to 1942 and was meant to teach skills and provide the men with jobs.

Members of the Civilian Conservation Corps worked on more than 80 state parks in Iowa and 46,000 Iowans were enrolled when the program was discontinued. Camps were maintained by the army, and most men came to the program with little other than the clothes they were wearing.

Company 2717 of the Civilian Conservation Corps, stationed in Hampton, was popular with the community. In December 1937, they were ordered to ship out to another park, but members of the community wrote to the Iowa governor in protest. Those protests led to the company staying until September 1938 to complete their various projects.

The property containing Beeds Lake was converted into a state park by Company 2717 from summer 1934 to 1938. This limestone dam, as well as other structures, was constructed by the Civilian Conservation Corps and the Beeds Lake dam is one of the most photographed dams in the Midwest. Officially, the park opened to the public on June 5 1938, but it had seen visitors as early as the 1936-37 season. 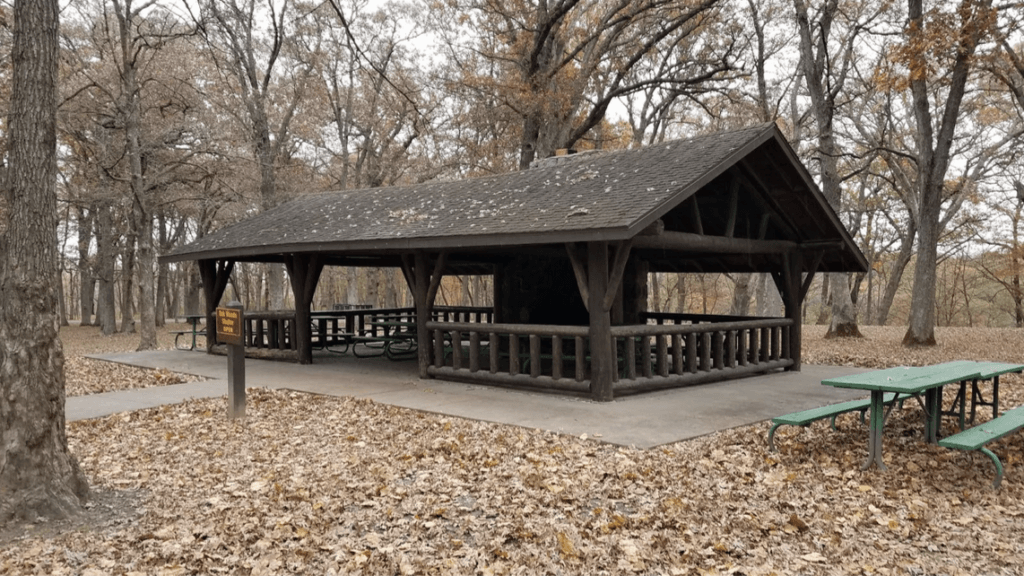 The Oak Woods Shelter was constructed by the Civilian Conservation Corps in the Lower Ledges part of Ledges State Park near Boone, and is now reservable for events. It’s one of a few structures built at Ledges. Company 2723 worked primarily at Ledges, but Company 780 was stationed in the same place and did a lot of work in Ames with the State Forest Nursery, Lake LaVerne, and land erosion projects.

4 Comments on "Iowa History In Photos: The Civilian Conservation Corps"