Photos posted by Miller-Meeks’ campaign manager a week ago on Twitter show volunteers putting together yard signs while posing in front of flags that include one used by a far-right, anti-government militia. The “Three Percenter” flag is shown hanging on the wall behind the Miller-Meeks supporters, the one with Roman numeral “III” on an American flag. 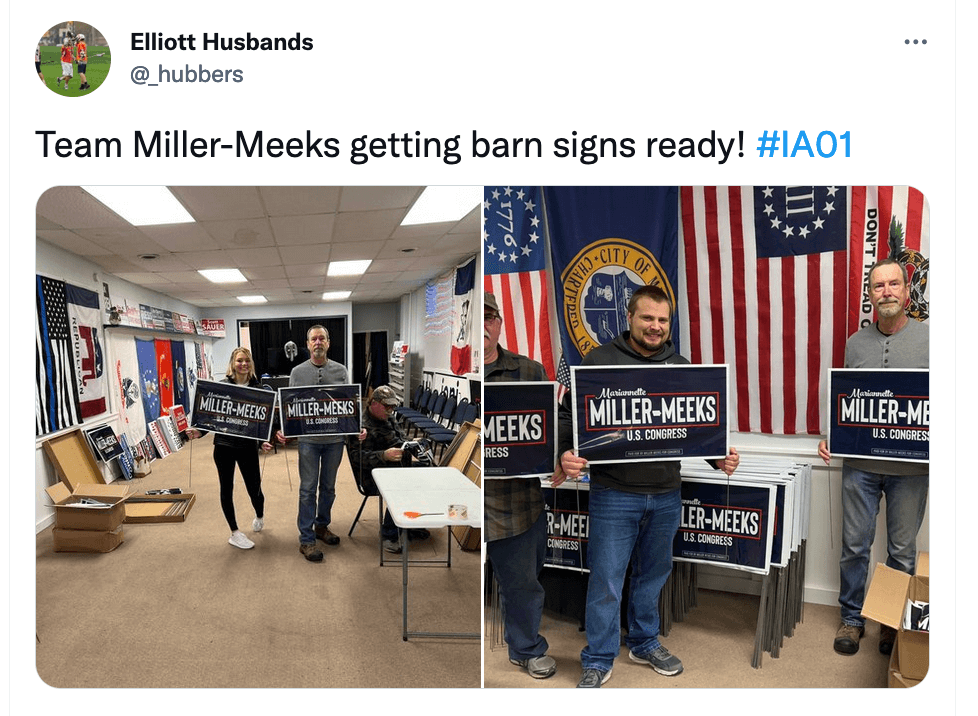 The Three Percenter flag is used by a far-right militia movement active in the US and Canada. The Canadian government designated the group a terrorist entity in 2021 after they were linked to several bomb plots and the planned abduction of Michigan Gov. Gretchen Whitmer. The militia movement operates off the debunked myth that just 3% of colonists fought the British during the American Revolution, hence the name.

“They believe a small force of armed individuals can overthrow a tyrannical government, and many Three Percenters engage in paramilitary training and organizing to do so,” the Southern Poverty Law Center wrote about the group. “…Their perceptions of tyranny emanate from the radical conspiracy theories and paranoia rooted in the decades-old antigovernment extremist movement, and have repeatedly led to violence against America’s law enforcement, citizens and residents.”

Numerous Three Percenter members have been arrested in connection with the attack on the Capitol building on Jan. 6. Militia members have been involved in a wide range of violent plots over the past decade. Simply associating with the group has come with consequences in the past, including New Jersey police officers who were disciplined for wearing Three Percenter badges.

Other flags behind them also have some symbolism to the far-right fringe, though they aren’t as definitively unique to a militia or fringe group as the Three Percenter one is.

Given there’s a city of Muscatine flag also hanging on the wall, one would presume this is at the local Muscatine Republican office.

Miller-Meeks herself also had an interesting exchange with a far-right activist who supports the release of many of the people arrested in the Jan. 6 insurrection. In a video posted on Twitter from last month, Miller-Meeks seems to indicate she’s advocating for some of the Jan. 6 rioters.

#J6Question—"What are you going to do about the patriots who are politically persecuted for participation in the January 6th Capitol Protest?"

“I was wondering, there are many people who believe the constitution and the republic cannot stand with two standards of rule of law…” a man asks Miller-Meeks while an event appears to go on in the background. “What are you going to do about the patriots who are being politically prosecuted for their participation in the January 6th?”

One of the biggest complaints lately of the far-right is the arrested Jan. 6 participants, who they call “patriots,” are being held in harsh conditions while awaiting trial, which is taking a while for some.

Many on the far-right have complained, notably at recent Republican town halls in Iowa, that only two members of Congress—Marjorie Taylor Greene and Louie Gohmert—have visited the rioters in jail. That makes Miller-Meeks framing of her response that “we” have been to the prison and sent letters particularly interesting.